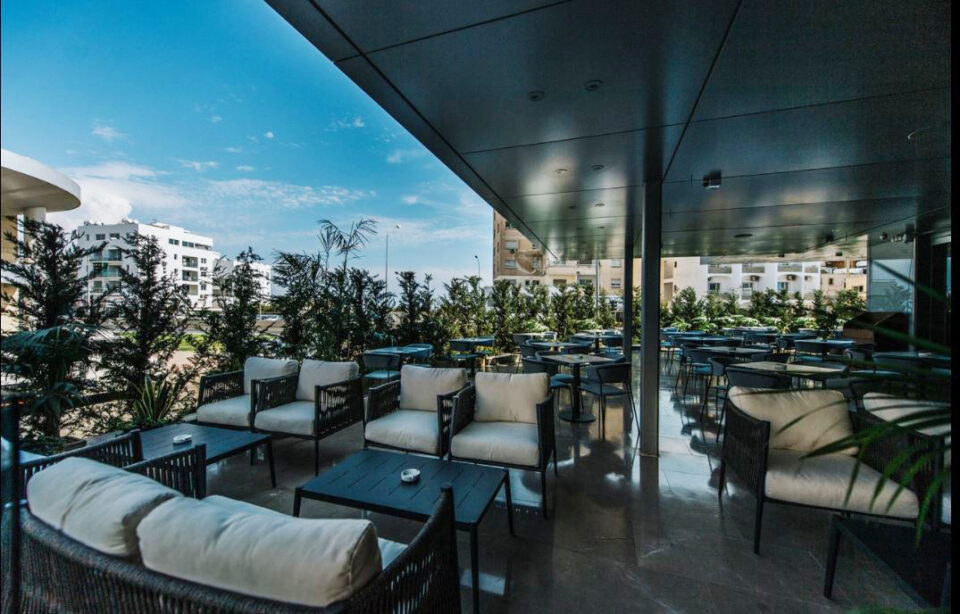 While there is a plethora of choices in Larnaca to go and have a fantastic lunch or dinner, there are perhaps only a handful of places that also serve a great brunch. And, having done the rounds, I was on the lookout for something new. A friend recommended that I try Dolce at the Radisson Blu hotel. My preconception was that it would be modern looking, expensive and offer measly portions but, in my quest for something new, I went to give it a try.

Walking into Dolce, my first impression was that it looked like a function hall. Even the design on the ceiling was reminiscent of some venues that are usually used to host weddings. However, after taking in the bigger picture, I liked the calming effect of the wooden finish on the walls. The colour of the wood may darken the room a little but the sunshine coming in through the large windows leading out to the balcony area seems to balance it out. I also spotted the bar at the far end of the room which displayed all the desserts and cakes that are served at Dolce. I had heard good things about them so I would most definitely be going to inspect that further later on! The outside balcony area was very appealing. The view isn’t much to look at, but it is surrounded by well-kept greenery.

The menu came and the cynic in me expected to be met with extortionate prices. I was actually pleasantly surprised. There wasn’t anything on the menu that I could say was overpriced. I did however notice something else. Spelling mistakes! Not to be picky but I think that a relatively new place in what is a good hotel should pay attention to these small details. Even so, the menu is nicely organised. It has a pleasant welcoming message, a page dedicated to symbols displaying allergens and a ‘directory’ page! The all-important drinks menu had a very good selection – everything from coffee to juices to homemade lemonade and cocktails.

Now, down to business. Being predominantly somewhere to go for brunch, the ‘main dishes’ section had a choice of just three dishes – chicken, pork and salmon. There were a few brunch options that caught my attention. One being the fluffy buttermilk pancakes. However, having already decided that I would be indulging in dessert later on I opted for ‘The King’. Two fried eggs, crispy bacon, halloumi, baked beans, toasted brioche served with a fig marmalade. One thing I’m not willing to be adventurous with is my coffee so, call me boring but, I opted for the filter coffee. The Irish coffee with Jameson whisky certainly was tempting, but it was a little early in the day.

The dish arrived and I must say, the food had been meticulously placed on the plate. The eggs perfectly placed on two rashers of bacon that formed an X shape. The strips of halloumi were laid out in a way that resembles a hashtag, the beans and the fig marmalade in little bowls on each end of the large plate. I cut into my egg and the yolk pored over the bacon on the toasted brioche. It was satisfying to watch, like lava slowly running down the side of a volcano. The bacon wasn’t quite crispy but, almost. That didn’t bother me as I actually prefer it that way. The fig jam, by itself was quite sweet but it was perfectly complimented by the crispy, cooked halloumi strips. The beans were…beans, you can’t really go wrong with that! My coffee had been sat next to me; the aroma was intense and I couldn’t wait to try it. As I had hoped for, it was lovely, the perfect accompaniment to my brunch. 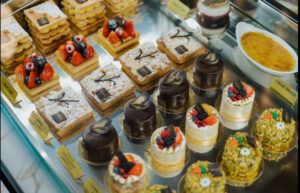 Brunch done with, I moseyed over to the dessert counter. All the selections on the menu were perfectly placed in neat lines next to one another. They all looked so appealing! I went for the Crème brûlée. I was not disappointed. Smooth, melt in the mouth texture left me with an ‘mmm’ moment.

I can most definitely say that I have found a top-notch place to go for brunch. The service was fantastic, the food extremely tasty and the prices very reasonable. I’ll be back for those fluffy pancakes very soon!