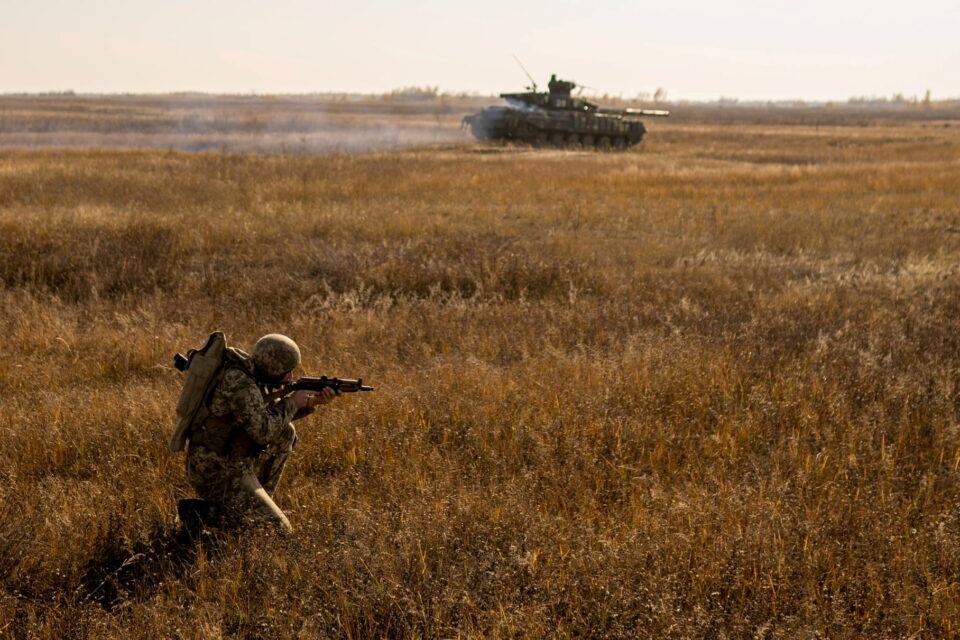 Army General Mark Milley, chairman of the Joint Chiefs of Staff, declined to speculate about the kinds of options the United States might consider in the event of a Russian invasion. But Milley, in some of his most extensive remarks on the crisis, stressed the importance of Ukraine’s sovereignty to Washington and to the NATO alliance.

“There’s significant national security interests of the United States and of NATO member states at stake here if there was an overt act of aggressive action militarily by the Russians into a nation-state that has been independent since 1991,” Milley said during a flight from Seoul to Washington.

Ukraine says Russia has amassed more than 90,000 troops near their long shared border. But Moscow has dismissed suggestions it is preparing for an attack on its southern neighbor and has defended its right to deploy troops on its own territory as it sees fit.

The Kremlin already annexed the Black Sea peninsula of Crimea from Ukraine in 2014 and then backed rebels fighting Kyiv government forces in the east of the country. That conflict has killed 14,000 people, Kyiv says, and is still simmering.

Experts caution that an unchallenged Russian invasion could be destabilizing, creating ripple effects well beyond Ukraine at a time of increasing anxiety over Chinese intentions toward Taiwan.

Milley declined to state publicly his estimate of the number of Russian forces near Ukraine but suggested his concerns went beyond the raw numbers of Russian troops.

“I’m not going to tell you what we track and the indicators or warnings from an intelligence standpoint, but we track them all,” Milley said. “And there’s enough out there now to cause a lot of concern, and we’ll continue to monitor.”

Russia and Ukraine have centuries of shared history and formed the two biggest republics of the Soviet Union until its 1991 collapse, so Moscow views its neighbor’s ambition to join NATO as an affront and a threat.

Since the latest crisis started, Moscow has set out demands for legally binding security guarantees from the West, and for assurances that NATO will not admit Ukraine as a member or deploy missile systems there to target Russia.

U.S. Secretary of State Antony Blinken warned Moscow on Thursday of “severe costs” if it invaded Ukraine, urging his Russian counterpart to seek a diplomatic exit from the crisis.

Milley declined to speculate whether Russian President Vladimir Putin might be emboldened by U.S. President Joe Biden’s withdrawal from Afghanistan, saying “You’d have to ask Putin.” The August pullout ended America’s two-decade-old war in an unambiguous defeat, with the Taliban returning to power.

“I think it would be a mistake for any country to draw a broad strategic conclusion based on the U.S. withdrawal from Afghanistan and then take that event and automatically apply it to other situations,” Milley said.

He cited historic examples of past U.S. presidents who withdrew troops in some places but ordered military action elsewhere.

“So the United States is a difficult country for other countries to understand sometimes,” he said.