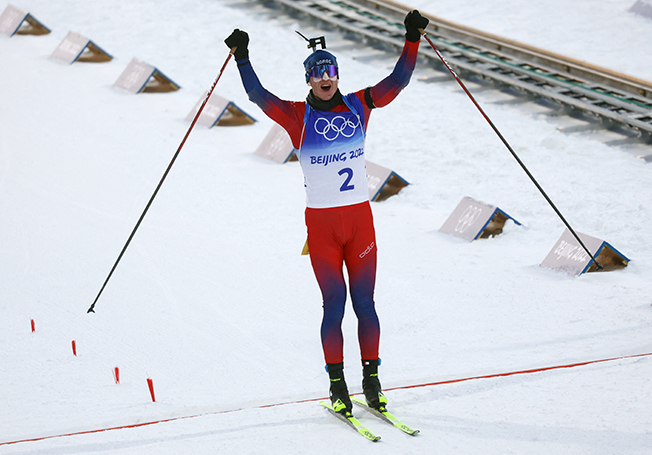 Norway’s Johannes Thingnes Boe won the men’s biathlon 15km mass start to claim their 15th gold medal at the Beijing Games on Friday, a Winter Olympics record achieved due to the country’s high level of professionalism across the board.

With two cross-country skiing races left, Norway already has victories in the biathlon, ski jumping, Nordic combined, speed skating, cross-country and freestyle skiing, so no-one could accuse them of being one-trick ponies.

“Yeah, that’s something to remember, even though we’ll probably get one more during this weekend. I was thinking about this on the last lap, it’s cool to be the guy that does the 15th gold,” a delighted Boe told Reuters.

Such is their depth of talent that Norway could afford to lose athletes of the calibre of Jarl Magnus Riiber (Nordic combined) and Simen Hegstad Krueger (cross-country skiing) to COVID-19 for much of the Games and still beat the record.

At the Beijing Games there are 109 gold medals in total, up from 102 in Pyeongchang four years ago and a far cry from the 16 on offer at the first Winter Olympics at Chamonix in 1924.

Marte Olsbu Roeiseland and Boe led the Norwegian medal charge in the 2022 biathlon events, with Therese Johaug and Johannes Klaebo doing the same a short distance away at the cross-country track, while at the ski jumping venue in between Marius Lindvik took gold on the large hill.

At Pyeongchang 2018, Germany and Norway had equalled the record of 14 gold medals won by a country at one Winter Olympics Games, matching the tally Canada had set at Vancouver 2010.

Norway’s chef de mission Tore Oevreboe is not surprised by the country’s success at the Winter Games.

“There are quite a few reasons why we’re a superpower in the winter sports. It has something to do with the format of the competitions,” he told Reuters before the record fell.

“We’re good at sports with many events that make it possible to take many medals, if you’re good at those sports and have quite a few athletes that are at a top level in those sports.”

The knowledge of how Norway achieve their victories is minutely analysed and shared.

The Norwegians also had a long-term approach when taking the altitude at the Beijing Games into account.

“Some of the sports have chosen to do much more of their basic physical work at high altitude than others,” Oevreboe said.

“From my experience, as a coach and also a former athlete, I think it’s very important to spend many, many, many weeks and days, even months, at high altitude the last two or three years before you have a competition at higher altitude.”

For Oevreboe Norway’s gold medals are a result of many factors and he is well aware things can change quickly in sport.

“Then they feel more happy. But we are very proud on the performance side of it, so we try to analyse what is what, and we try to develop even when we are at the top level.”

Liverpool have chance to appear in City’s rear view mirror