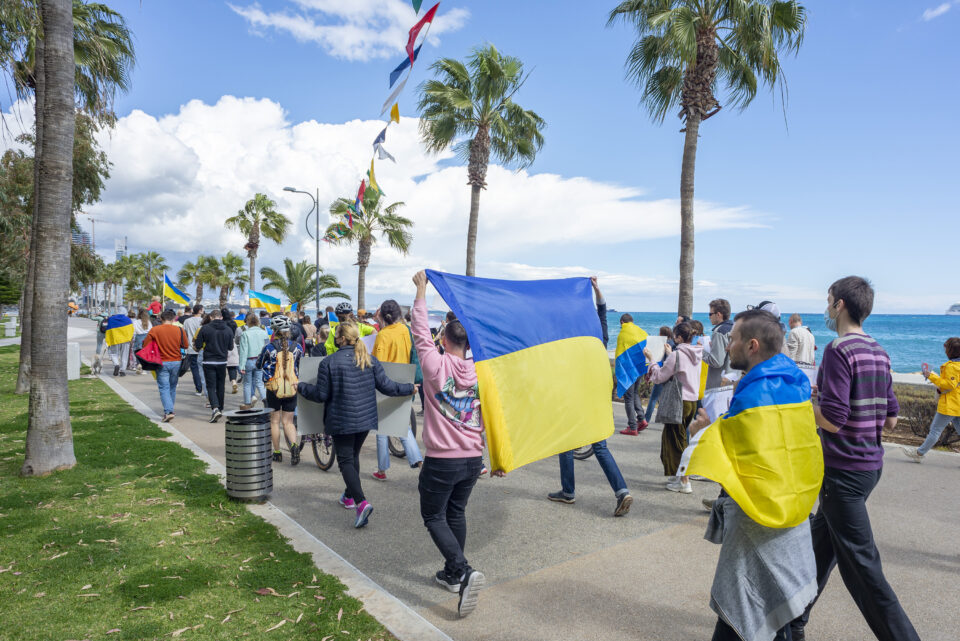 Ukrainians of all ages protested in Limassol and Paphos on Friday, as part of a series of anti-war demonstrations in solidarity with Ukraine after Russian troops invaded and attacked the country this week.

Over 100 people gathered at noon at the old Limassol port as a similar protest was held at the coastal front of Paphos, calling on Cyprus and the whole world to help the Ukrainian people.

The protests was attended people from Ukraine who live at various districts in Cyprus, Cyprus News Agency reported.

They carried banners making statements such as #Terrorussia’, ‘Stop Putin, Stop war’, and ‘Stop Russian aggression to save Europe’s future’.

Some reminded that Cypriots should be very familiar with the situation faced by Ukraine, comparing the situation with that of 1974 during the Turkish invasion.

Ukrainians marching in Limassol told the media they were “living in fear and anxiety for their relatives and friends”, many of whom told them that they were looking for shelter in subways and basements to escape the bombings.

As it was here in 1974, said Corina Lyskavidou to the CNA’s correspondent in Paphos, Ukraine experiences a full-scale war. People are unable to leave, including her relatives, and children are hiding in basements to protect themselves from the sound of bombs, the permanent resident of Paphos said.

Among other things, protesters asked the Cypriot government to exclude Russia from the SWIFT international banking system, adding that the issue is no longer about loans and repayments, but about the freedom of a country that is, according to some demonstrators “a victim of Russia’s expansionism.”

Young Vladislav, who is half Ukrainian and half Cypriot, and has many relatives in the areas of Ukraine which were bombed, also said the aim of the protest is to cut the Russian state out of the global swift system. He explained this will be a form of resistance against the invader, in the commercial and economic sectors.

“As soon as the invasion started, they [relatives] woke up to the sound of the bombing”.  Our people, he added, want to continue to live on the territories of Ukraine and defend them. Otherwise, we will simply perish, he told CNA.

Another woman, Olga Titoni, who has been living in Cyprus for 18 years, also said her relatives and friends will stay in Ukraine, as they have elderly parents who cannot move.

Protests also took place on Thursday both in Limassol and outside the Russian embassy in Nicosia as Cyprus police stepped up security around foreign embassies and at airports.

More anti-Russia protests are expected over the weekend and in the coming days.

On Saturday, a protest is scheduled for 12pm outside the presidential palace in Nicosia, while another anti-war event was announced for 4.30pm on Sunday at Eleftheria Square by the Cyprus Peace Council.

Britain ‘will lead by example’ in standing up to Vladimir Putin