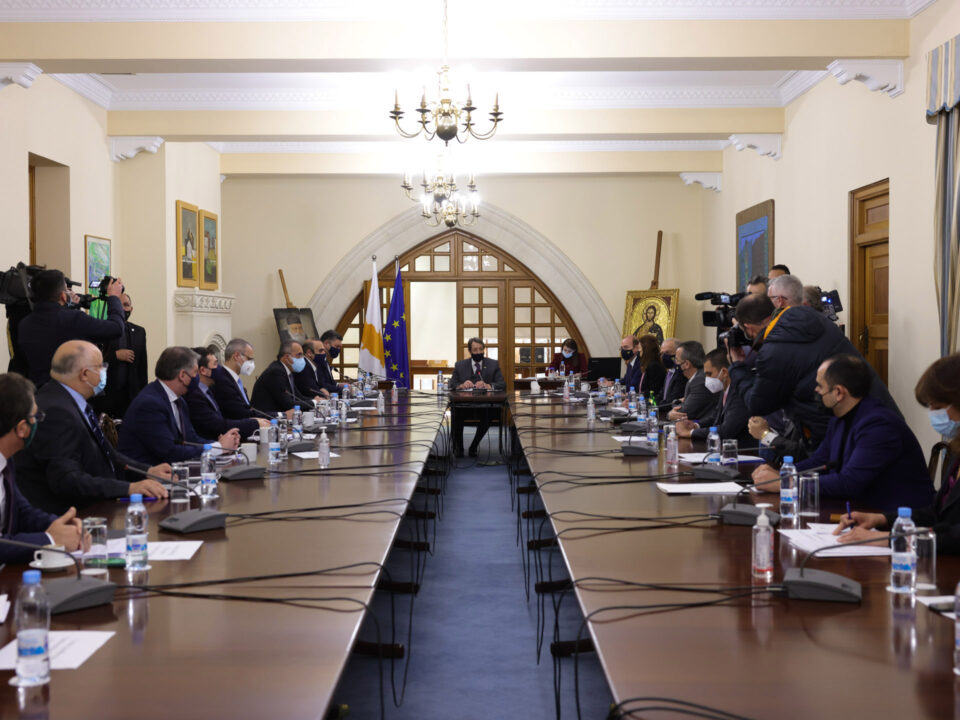 The meeting at the presidential palace on Friday

The meeting called by President Anastasiades on Friday decided the setting up of two ministerial committees that would monitor the effects of the situation in Ukraine. After the meeting, the government spokesman, Marios Pelekanos, said these ministerial committees would follow the course of events and make decisions in the speediest and most effective way. The president also gave orders for “the readiness of all involved agencies and asked for all aspects to be closely monitored.”

These vacuous generalities were followed by a statement of the obvious. “From what was said in the extensive discussion that took place, our country, like all other European countries, will face consequences in various sectors of the economy.” Pelekanos added that “according to the current state of affairs, the consequences for our country are manageable and within the capabilities of the state.” We would like to hope that the consequences, whatever these may be, would always be manageable, if not within the financial capabilities of the state.

Statements like these indicate that the main reason for the meeting was for the president to show that the government is in control and, presumably, prepared to face any eventualities. Perhaps it was felt that the public needed some reassurances, even though the meeting produced only platitudes. Then again, it could not really have taken any decisions, given that we are faced with uncertainty and constantly changing conditions. Nobody can predict how long the war will last. Its duration will determine what other sanctions will be imposed, the counter-measures taken by Russia and how the world economy will be affected.

One thing should not be under discussion – that Cyprus could even consider deviating from the sanctions decided by the European Union. The airing of reservations by foreign minister Ioannis Kasoulides at last Sunday’s informal meeting of foreign ministers, which decided to close European airspace to Russian aircraft, was an ill-advised move, that could not have put Cyprus in a positive light among our partners. On the contrary, it gave the impression, wrongly perhaps, that Cyprus had prepared a pretext – “the instrumentalisation of this European decision, with the aim of attracting and transporting Russian citizens to the occupied territory” – to argue for the lifting of the sanctions at some point.

In fact, the transport minister, Yiannis Karousos, told journalists on Wednesday that the possibility of lifting the sanctions was something that would be discussed with the foreign minister and the president. This should not be treated as a possibility. Cyprus should be prepared to deal with the adverse consequences for the economy of the war in Ukraine just as any other EU member-state would have to. The argument that Cyprus should not have to close its airspace because its economy depends on Russian tourists is, to say the least, laughable. All of Europe has united in a concerted effort to stop the carnage in Ukraine, but Cyprus is entertaining the idea of lifting the Europe-wide closure of air-space because the hotels of Ayia Napa and Protaras will lose business.

All of Europe, not just the EU is prepared to suffer the economic hardship that sanctions against Russia would bring. Germany’s new chancellor, Olaf Scholz, has agreed to ditch the Nord Stream 2 gas pipeline which cost €10 billion. Protesters at a mass rally in Berlin held banners saying “better a cold shower than Putin’s gas”. France’s President Emmanuel Macron, despite fighting an election next month, told the French that sanctions would bring economic hardship. Everyone in Europe knows that sanctions could cause energy prices to rise even higher than they are at present, hitting living standards across the board, but no country had submitted reservations and the right to re-examine decision like Cyprus had done.

We need to accept that there will be economic hardship and that Cyprus cannot take a different path from its EU partners, because it depends on Russian tourists. Tourism figures will be down and the economy will take a hit, no matter how closely the ministerial committees set up by President Anastasiades will be monitoring the effects of the war and sanctions. There is only so much the government can do to cushion the economy and it should ignore calls by parties like Akel for a “comprehensive plan for handling the rises in the prices of fuel, energy and necessities,” because all this means is increasing state spending.

It should be borne in mind that public finances, after two years of the pandemic, are not in the best shape, and the government does not have funds to offer the kind of support parties like Akel envisage. The European Commission could sanction more low-interest, state borrowing, but after the steep rise in the indebtedness of states caused by the pandemic, it is no certainty. A difficult time lies ahead and the government would do well to prepare people for it instead of allowing opposition parties to claim that the state has the funds to make the economic hardship disappear or that somehow we will secure permission to fly Russian tourists to Cyprus.