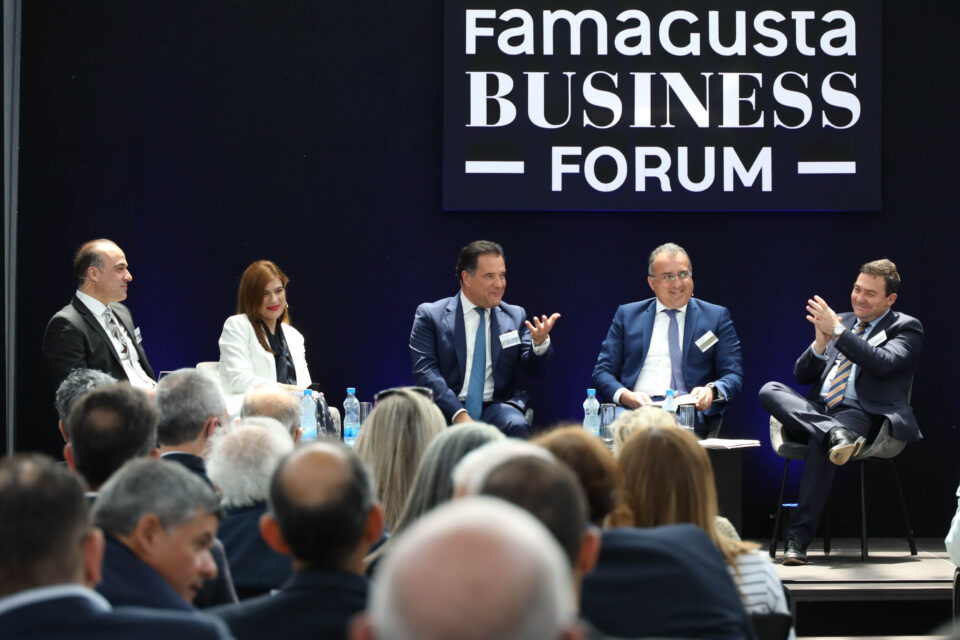 A roundtable discussion at the Famagusta Business Forum

Finance Minister Constantinos Petrides on Thursday defended the government’s actions to deal with the recent rise in consumer prices, saying that the measures that have been taken so far are some of the most drastic in Europe.

However, he also conceded that there are concerns about the possibility of inflation remaining high for an extended period of time, before saying that the current crisis is not identical to that created by the coronavirus pandemic.

Petrides’ comments came during his speech at the Famagusta Business Forum, an event held by the Famagusta Chamber of Commerce and Industry (Evea) in collaboration with its Greek counterpart from Piraeus.

“Unfortunately, we cannot kill inflation,” Petrides said, explaining that it is something plaguing all of Europe and stems from a variety of reasons, including the war in Ukraine, among others.

Petrides said that €160 million have been allocated in support measures so far, through a number of programmes.

These include the reduction in VAT from 19 to 10 per cent for electricity bills, as well as the further reduction of VAT to 5 per cent for the most vulnerable groups.

Additionally, there was increase an of 50 per cent in the allowance for rural areas due to the sharp rise in oil prices.

Emergency support was also given to farmers due to the grain crisis caused by the war, with Ukraine being a major exporter.

“If we put all of this down, we are among the countries that have taken the most drastic measures,” the minister said.

He added that we are entering a new economic era and stressed that it is very important to maintain some resilience due to the high levels of uncertainty.

Regarding a recent letter by the Cyprus Chamber of Commerce and Industry (Keve) asking for the government to extend its state-backed loans scheme, in conjunction with the suspension of loan instalment payments, Petrides said that “these things are over, I think Keve is aware of this”.

“We will look at their letters but this crisis is very different from the one during the pandemic, where fiscal policy kept businesses afloat,” Petrides said, noting that such measures helped avoid businesses going bankrupt and kept unemployment low.

The minister said that the government would be very cautious about how it implements any support measures, with those most affected by inflation being the vulnerable groups, highlighting the need to focus on the social aspect of any interventions.

“There are hundreds of millions of euros already in the budget that help businesses, especially in terms of their dependence on fossil fuels,” Petrides said.

“Businesses need to take these steps so that these savings required to achieve energy independence can be realised as soon as possible,” he added.

Also speaking at the forum was the Minister of Energy, Commerce and Industry Natasa Pilides, who spoke on the various support measures, schemes and programmes launched or announced by her ministry.

“I mention, by way of example, the budgets secured by our Ministry from European funds, for direct or indirect support of companies, which will exceed €540 million for the period between 2021 and 2027,” Pilides said.

“In 2021 we announced funding schemes amounting to €130 million, while in 2022 the corresponding amount will reach €155 million,” she added.

Pilides explained that there are ongoing efforts to help deal with the adverse effects of rising fuel and energy costs, referencing the aforementioned reduction in VAT.

She also mentioned a number of schemes launched over the past two years, including a €70 million scheme for better energy efficiency in residential buildings, €16 million for solar panels, as well as €1.5 for electric vehicle charging, among others.

The minister also praised the trade relations between Cyprus and Greece, saying that these remained at high levels during the previous year.

In addition, she noted that the exports of Cypriot products to Greece increased by about 9 per cent in 2021, reaching €252 million in total.

Respectively, the imports of Greek products to Cyprus amounted to €2.04 billion, reflecting an increase of 21 per cent.

“We see today – even in these adverse conditions of the pandemic – the efforts made by the two countries in recent years to continuously strengthen trade relations between us,” Pilides said.

“We consider that in the case of Cyprus and Greece, factors acting to counter the impact of the effects of the war on Ukraine on bilateral trade include our geographical proximity, as well as the breadth and well-established framework of our trade relations,” the minister added.

Meanwhile, Famagusta Chamber of Commerce (Evea) president Augustinos Papathomas said that the event, the first of its kind in the district, will continue happening every year, with the location alternating between Ayia Napa and Piraeus.

He expressed his hopes that it could soon take place in the occupied part of Famagusta.

In addition, Papathomas said that the chamber is focused on developing the business potential of Famagusta.

“We believe that the district of Famagusta needs to utilise all of its potential to develop evenly in other sectors, it cannot depend exclusively on tourism,” the Evea president said.

“By the end of the conference, there will be some conclusions that will help the participants find solutions that will allow Famagusta to develop better and more uniformly,” Papathomas concluded.

“We have admired this fantastic marina and the space the event took place in and I believe it is something innovative for the region of Famagusta,” Perdios said.

“This gem is not only for yachting and restaurants, but it also has the potential to attract to the region other specialised forms of tourism, including conferences and cruising events,” the minister added.

Regarding this year’s tourist arrivals, Perdios said that the tourist season has been promising so far.

“Considering that these four months there was the war in Ukraine and the outbreak of the Omicron variant, these results have not been bad,” Perdios said, in reference to the 70 per cent occupancy rate when compared to the same period of 2019.

“When seeing the number of internet searches related to holidays in Cyprus, we feel that there is increased interest, Perdios added, before explaining that “this does not guarantee such high percentages, but that there is definitely interest”.

Why should business executives think about currency trading?