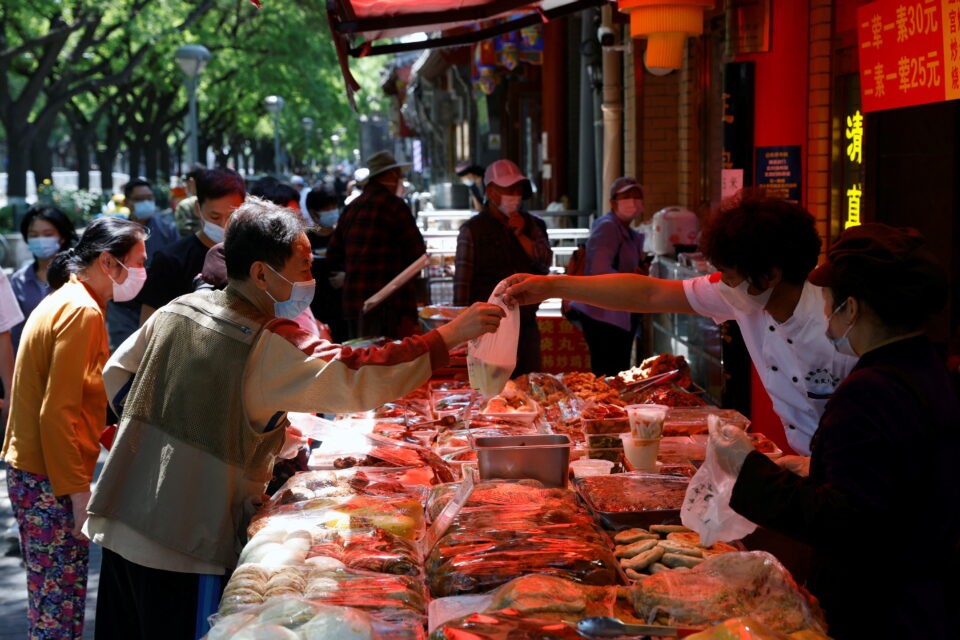 Life in Beijing is getting back to normal

China’s retail and factory activity fell sharply in April as wide COVID-19 lockdowns confined workers and consumers to their homes and severely disrupted supply chains, casting a long shadow over the outlook for the world’s second-largest economy.

Full or partial lockdowns were imposed in major centres across the country in March and April, including the most populous city Shanghai, hitting production and consumption and heightening risks for those parts of the global economy heavily dependent on China.

Retail sales in April shrank 11.1% from a year earlier, the biggest contraction since March 2020, data from the National Bureau of Statistics (NBS) showed on Monday, a steeper decline than forecast in a Reuters poll.

Factory production fell 2.9% from a year earlier, dashing expectations for a rise and the largest decline since February 2020, as anti-virus measures snarled supply chains and paralysed distribution.

Analysts now warn China’s current downturn may be harder to shake off than the one seen during the onset of the coronavirus pandemic in early 2020, with exports unlikely to swing higher and policymakers limited in their stimulus options.

“The upshot is that while the worst is hopefully over, we think China’s economy will struggle to return to its pre-pandemic trend,” Capital Economics analysts said.

The weak data sent China’s blue-chip stock index .CSI300 into the red in a sharp reversal from morning gains and also put an end to the brief rally seen other Asian markets on Monday.

Industrial output around the Yangtze River Delta, which includes Shanghai, fell 14.1% in April, while that in China’s northeast shrank 16.9%. Both regions saw a more than 30% dive in retail sales.

“In April, the epidemic had a relatively big impact on the economic operation, but this impact was short-term and external,” Fu Linghui, a spokesperson at China’s statistics bureau, said at a press conference in Beijing on Monday.

Fu said he expects economy to improve in May with COVID-19 outbreaks in Jilin, Shanghai and other places coming under control.

Fixed asset investment, which Beijing is counting on to prop up the economy as exports lose momentum, rose 6.8% in the first four months, compared with an expected 7.0% rise.

Data showed a 22.7% drop in catering revenue in April as dining-out services were suspended in some provinces. Auto sales plunged 47.6% as carmakers slashed production amid empty showrooms and parts shortages.

Property sales by value slumped 46.6% from a year earlier, the fastest pace since at least 2010, as COVID-19 lockdowns chilled demand.

Worried about the weakness, economists have called for cash handouts from the government to the population.

The COVID shock also weighed on the job market, seen now as a top policy priority for Beijing to maintain economic and social stability. China’s nationwide survey-based jobless rate rose to 6.1% in April, the highest since February 2020 and above government’s 2022 target of below 5.5%.

Analysts say China’s official 2022 growth target of around 5.5% is looking harder and harder to achieve as officials maintain draconian zero-COVID policies. The economy grew 4.8% in the first quarter.

The extended lockdown in Shanghai and prolonged testing in Beijing are adding to the concerns about growth for the rest of the year, said Nie Wen, a Shanghai-based economist at Hwabao Trust.

“It’s still possible to achieve a GDP growth of around 5% this year if COVID curbs are only going to affect the economy in April and May. But the virus is so infectious, and I remain concerned about growth going forward.”

Nie said authorities would be cautious in rolling out quantitative measures like large-scale cuts to interest rates or banks’ reserve requirements to spur the economy, given concerns about U.S. Federal Reserve interest rate hikes and a depreciating Chinese currency. Structural and targeted measures, for struggling sectors such as property, would be used instead.

In a sign of continued support, China’s central bank rolled over maturing medium-term policy loans on Monday but kept the rate on those loans unchanged for a fourth straight month.

Analysts at ANZ said the impact of Shanghai’s lockdown is far-reaching.

“With total factory productivity yet to catch up, China’s growth will likely stay at the low end of the 4.0-5.0% range in the next few years,” ANZ said.