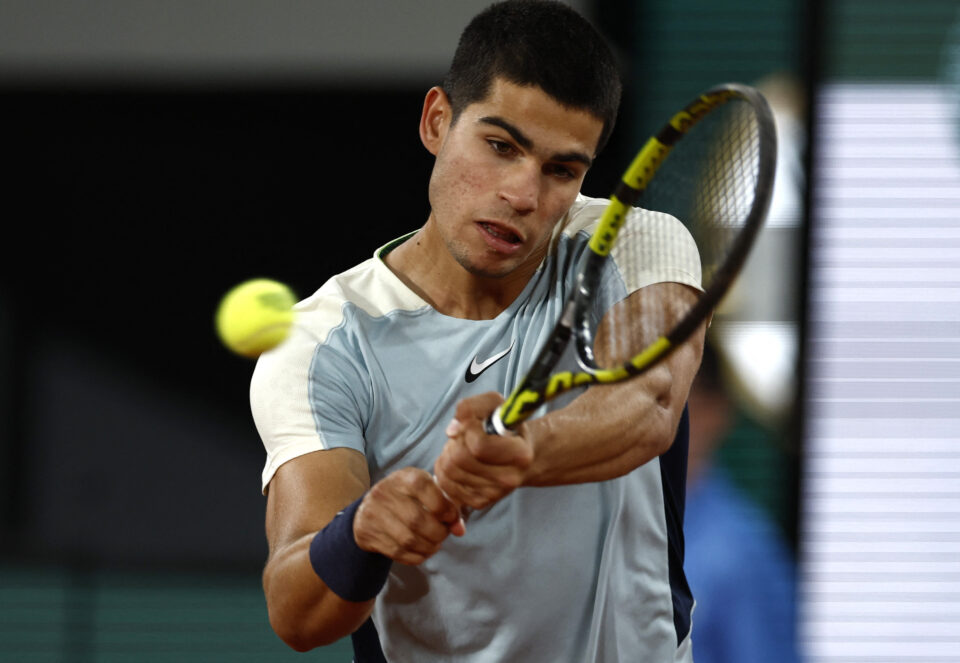 Tennis - French Open - Roland Garros, Paris, France - May 27, 2022 Spain's Carlos Alcaraz in action during his third round match against Sebastian Korda of the U.S. REUTERS/Yves Herman

Carlos Alcaraz’s meteoric rise continued on Friday when the Spanish prodigy produced yet another awe-inspiring performance to outplay American Sebastian Korda 6-4 6-4 6-2 and reach the last 16 of the French Open for the first time.

Facing the only man to beat him on clay this year, the sixth-seeded teenager, who saved a match point in the second round, showed his full range on a packed court Philippe Chatrier – mixing powerful forehands with gravity-defying drop shots.

The 27th-seeded Korda threw everything at his opponent, only for the ball to come back quicker and with more power and the American faded in the third after a high-octane fight in the first two sets.

Alcaraz, who now has an 18-1 win-loss record on the red dirt this season after winning titles in Barcelona and Madrid, will next face 21st-seeded Russian Karen Khachanov before a potential quarter-final clash against third seed Alexander Zverev.

“It’s amazing to play in front of such a great crowd in this atmosphere on a night session,” the 19-year-old Alcaraz, who stunned the crowd with some serve and volleying, said.

Should the stars align for Alcaraz, he could eventually take on either world number one and defending champion Novak Djokovic or 13-time Roland Garros winner Rafael Nadal in the last four.

“If I am winning, I just play against one of them. I think I’m ready. It’s different to play against them,” he said.

“I mean in the Masters 1000 or another tournament it’s best-of-three and in Grand Slam it’s best-of-five, but I would say I’m ready.”

Alcaraz got off to a brilliant start and had a couple of double break points at 3-1, only for Korda to stave them off with a service winner and an ace.

But the Spaniard was untroubled on his service games and he wrapped up the opening set having lost only six points on serve.

Korda found his range early in the second set and set up two break points but Alcaraz held firm and showed his ability to find the best shot at the best moment – including a sublime lob while on the back foot to go 30-0 up in the fifth game.

He won that game with a superb forehand winner down the line.

Korda saved set points at 5-3 but yielded under pressure in the 10th game, returning long to hand Alcaraz a two-set lead.

It quickly went downhill from there for Korda, who dropped serve again with a volley into the net in the seventh game and capitulated on the first match point when Alcaraz unleashed a backhand winner down the line.

1906 ZVEREV SAILS INTO FOURTH ROUND

The German, who won the Olympic gold in Tokyo last year, will be playing in the fourth round in Paris for the fifth consecutive year.

Spanish qualifier Bernabe Zapata Miralles reached the fourth round at a Grand Slam for the first time by beating American 23rd seed John Isner 6-4 3-6 6-4 6-7(5) 6-3 in a contest that lasted nearly 3-1/2 hours.

1705 AZARENKA KNOCKED OUT BY TEICHMANN

Number 15 seed and twice major winner Azarenka slumped out in Paris, losing 4-6 7-5 7-6(5) to Teichmann in the third round after three hours 18 minutes.

Teichmann will play in the fourth round of a Grand Slam for the first time. She faces American Sloane Stephens, the 2018 finalist, who beat Frenchwoman Diane Parry 6-2 6-3.

World number one Djokovic breezed into the last 16 with a dominant 6-3 6-3 6-2 win over Slovenia’s Bedene in just under one hour 45 minutes.

Djokovic, the reigning champion, remains on course to win a record-equalling 21st Grand Slam title and will face Schwartzman for a place in the quarter-finals.

American 18-year-old Coco Gauff, the youngest player in the women’s draw, reached the fourth round with a 6-3 6-4 win over 36-year-old Kaia Kanepi, who is the oldest women’s player in Paris.

1324 KERBER KNOCKED OUT BY SASNOVICH

Angelique Kerber’s quest of completing a career Grand Slam came to an end after the 21st seed was knocked out of Paris, losing 6-4 7-6(5) to Aliaksandra Sasnovich in the third round.

Sasnovich will be heading to the fourth round at the clay court major for the first time.

Canadian teenager Leylah Fernandez, a U.S. Open finalist last year, battled past Olympic champion Belinda Bencic 7-5 3-6 7-5 to advance to the last 16 in Paris for the first time and set up a meeting with Anisimova.

Anisimova booked her place in the fourth round after opponent Karolina Muchova retired at 6-7(7) 6-2 3-0 in the third set following an ankle injury.

Argentine 15th seed Diego Schwartzman ripped a spectacular backhand winner to wrap up a 6-3 6-1 6-2 win over Grigor Dimitrov, who racked up a staggering 59 unforced errors, to reach the last 16 in Paris for the third straight year.

Serena had doubts over career before making winning return