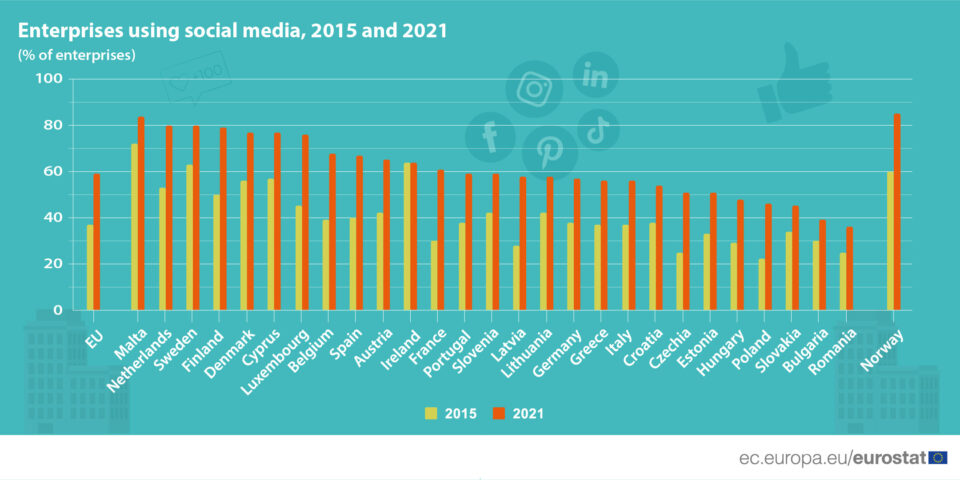 Almost 80 percent of businesses in Cyprus used social media in 2021 to get their message across, a steep rise on 2015 when the figure was just under 60 per cent, data released by Eurostat on the occassion of World Social Media Day, which is on June 30, showed.

According to Eurostat in 2021, 77 per cent of enterprises in Cyprus were using at least one type of social media, compared to 57 per cent in 2015.

A total of 36 per cent of businesses used multimedia content-sharing websites, while 23 per cent used an enterprise blog or microblog, which was well above the EU average of 28 per cent and 11 per cent respectively. Meanwhile, only 4 percent of enterprises in Cyprus used Wiki-based knowledge-sharing tools, just below the EU average (six per cent).

The percentages of EU businesses using blogs or microblogs were highest in Spain (26 per cent) and Cyprus (23); multimedia content-sharing websites were highest in Finland (50) and in the Netherlands (45),” said Eurostat.

Meanwhile, 35 per cent used only one type of social media, with 42 per cent opting to spread their bets and use two or more to promote themselves to a wider audience.

“More and more enterprises in the EU are using social media. In 2021, more than half of the enterprises (59 per cent) reported that they were using at least one type of social media, which means an increase of 22 percentage points since 2015 (37 per cent),” Eurostat said.

Belgium and France reported largest increase in social media use.

Compared with 2015, the share of enterprises using social media has risen across all EU member states but one. The largest increases were recorded in Belgium and France (both +31 per cent), followed by Latvia (+30) and Finland (+29).