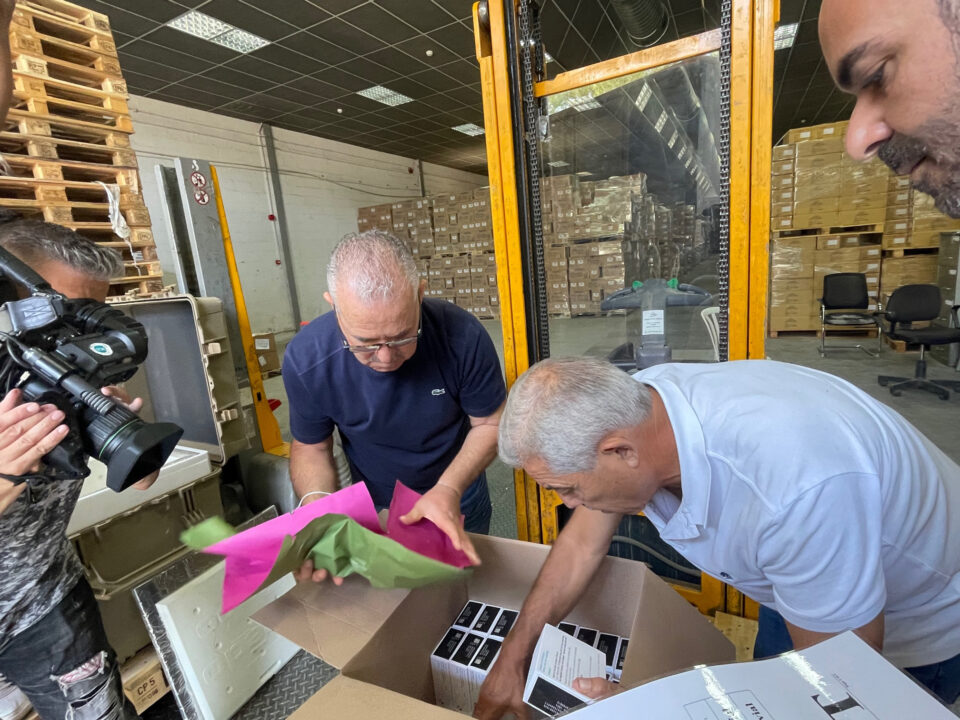 Monkeypox vaccines being unpacked on Saturday

Cyprus has detected two more cases of monkeypox, the health ministry said on Saturday, as the first batch of 1,260 vaccines arrived on the island.

It said two men aged 20 and 30 who recently arrived on the island had tested positive.

“From the first moment, the relevant protocols for the transfer and management of suspected and confirmed cases of the disease were implemented,” it said.

“The cases are hospitalised in good condition in the specially designed area of the reference hospital in Nicosia general for monitoring and further evaluation of their condition.”

It added that the epidemiological surveillance unit has started the process of tracing and informing their contacts.

The development brings the cases of monkeypox to three. A 40-year-old man is already hospitalised.

Meanwhile, the health ministry on Saturday announced that the first batch of monkeypox vaccines has arrived in Cyprus.

The vaccine delivery was the result of coordinated efforts between Health Minister Michalis Hadjipantela and EU Health Commissioner Stella Kyriakides, the ministry explained.

The first batch of vaccines will be comprised of 1,260 doses. They will be given free of charge starting on Sunday.

“Today we successfully received 1,260 doses, amidst a great deal of demand from other countries, including Portugal, Holland, Austria, and Israel,” director of the pharmaceutical services Elena Panayiotopoulou said upon the arrival of the vaccines.

“However, in the end, the delivery of the vaccines was achieved by the initiative of the health minister and with the help of EU Health Commissioner Stella Kyriakides,” she added.

Panayiotopoulou explained that another batch of vaccines is expected to be delivered once the number of vaccines allocated to Cyprus has been completed.

“Because there is a limited number of vaccines in Europe, this is distributed according to each country’s incidents,” Panayiotopoulou said.

“If this initiative did not exist, the current delivery of these vaccines would not have been possible.”

People who will be prioritised for vaccines include healthcare workers who deal with monkeypox incidents, as well as the relatives and people who have been in contact with confirmed monkeypox cases.

Both the people who will arise from contact tracing and healthcare workers will be asked if they wish to receive the vaccine.

Regarding the two new confirmed cases, Panayiotopoulou explained that contact tracing has already begun, which is why the vaccination process will commence on Sunday, since it will allow for close contacts to be established.

Additional information as to where the vaccines will be administered will be released next week.

The vaccine is comprised of two doses with a 28-day gap necessary between each jab.

The vaccine is called Imvanex and is produced by Danish biotechnology company Bavarian Nordic, with the European Union’s drug regulator on July 22 having recommended that the company’s Imvanex vaccine be approved to also include protection against monkeypox on its label.

“The vaccine contains an attenuated (weakened) form of the vaccinia virus called ‘modified vaccinia virus Ankara’, which is related to the smallpox virus,” Panayiotopoulou explained.

“So the smallpox virus and the monkeypox virus are related, so when someone is vaccinated with this vaccine, it causes the body to produce antibodies so that when it comes into contact with the virus, there are antibodies ready and able to fight the virus, meaning that vaccinated people will have immunity against the virus,” she added.

Panayiotopoulou clarified that people who have received a smallpox vaccine will only need one dose of the vaccine, as a booster shot, while people without it will need both doses.

Panayiotopoulou stressed that the situation “is not comparable to Covid-19, because it will not involve vaccination of the general population”.

“Therefore, the evolution of the situation will be observed, including how many were vaccinated, who will be vaccinated, how many cases there are, how they are developing, as well as the number of cases, so the necessary supplies will certainly be procured accordingly,” she added.

Regarding the antiviral drug Tecovirimat, which has been licensed by the EU, Panayiotopoulou confirmed that Cyprus is already participating in the common procurement process.

Cyprus will begin receiving the drug when this also starts to happen in the other participating countries.

An ad-hoc monkeypox management committee has been put in place and will decide when and how the drug will be administered.