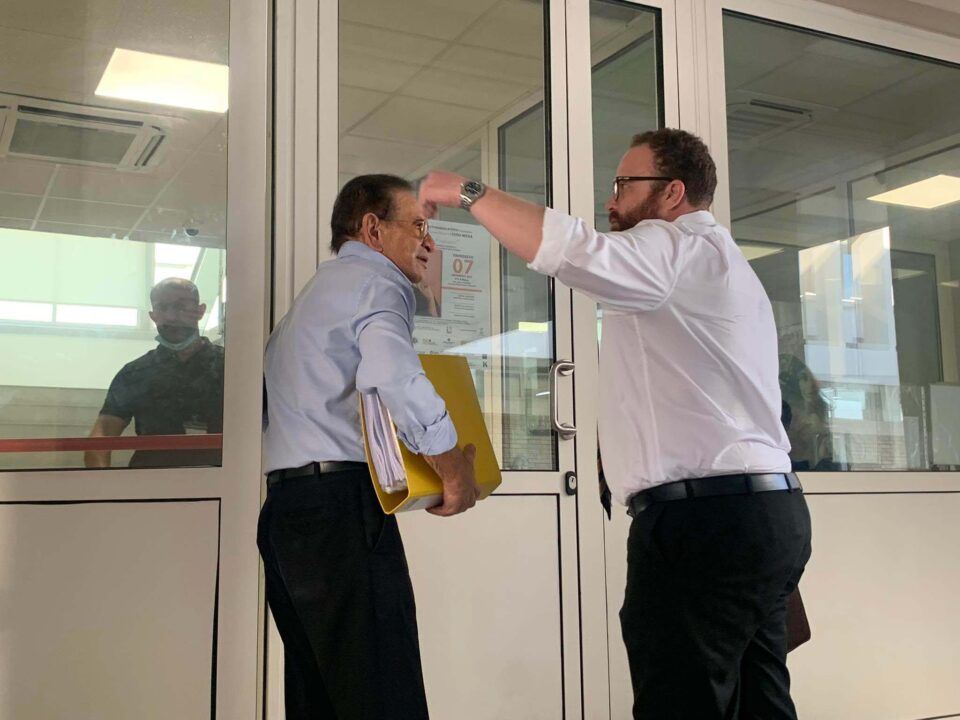 The two investigators at the AG's office on Thursday (Christos Theodorides)

Savvas Matsas – one of the two criminal investigators tasked with shedding light on the death of guardsman Thanasis Nicolaou in 2005, said on Friday that “in 50 years of service I have never witnessed such negligence.”

Speaking to Trito, Matsas commented on the findings of the 92-page report into the case of Nicolaou, who was found dead under a bridge in Limassol 17 years ago.

Nicolaou’s mother, Andriana, has been unrelenting on the matter as she never believed the narrative that her son had committed suicide, instead pointing to fellow army mates as having bullied her son.

“I have been in this profession for 50 years and I have never seen such a degree of negligence from the authorities that were responsible for investigating the matter,” Matsas said.

He went on explaining that the negligence mostly concerned the forensic examination of the body during the post-mortem, calling it “the moment in which the case examination started taking a turn for the worse.”

He also alluded to a cover-up.

“Unsubstantiated findings were claimed to be facts throughout the entire case, which led to an incomplete and incorrect investigation.

“As a result, an incredibly serious offence was investigated as a minor offence by the police,” Matsas said.

An investigation on Nicolaou’s body carried out by coroners in Athens, who examined the 26-year-old’s exhumed remains, concluded that he was strangled, as his hyoid bone, initially recorded as undamaged, was found to have been broken.

The most recent findings into the circumstances, the ones described by Matsas, were handed to Attorney-general Giorgos Savvides on Thursday.

During the same day, state broadcaster CyBC said the dossier points the finger at four individuals – three former police officers and a civilian. If accurate, this could relate to an earlier judgment by the European Court of Human Rights (Echr) which stated that Cypriot police had bungled the initial investigation into the young soldier’s death.

“It is not the first time those names are associated with Nicolaou’s death,” Matsas said during his interview on Trito.

“The main issue emerged throughout the report is the fact that the soldier suffered unprecedented bullying for several months prior to his untimely death.

“All the suspicious circumstances and evidence leading to his death were completely ignored,” Matsas concluded.

“Too many omissions were made in the course of investigation by the police, which resulted in valuable time being lost and a proper and effective investigation not being carried out.”

He said the police were led astray by the first forensic report and acted in an incorrect manner, assigning it from the outset to an inexperienced police officer.

Asked by CNA if he thought the findings of the report would help bring the perpetrators to justice, Matsas said that if the proper investigation was done – even now – and certain other actions were taken, “which I cannot I report publicly”, there was a possibility of justice being served.

He said this was a matter for the attorney-general and the police authorities as to whether they will continue in this direction.

There were suspicions about the perpetrators but not the required testimony to establish reasonable suspicion, he said though it was clear there were criminal acts.

The criminal investigators did not think it was right to classify the persons, for whom there are simple suspicions, as possible perpetrators, but “of course they are included among those who are suspects,” Matsas said.

“There are suspicions, but without the required testimony to establish reasonable suspicion. These are simply suspicions.”

Meanwhile, Chief of Police Stelios Papatheodorou said he does not believe that police officers attempted to cover up Nicolaou’s death in 2005.

“I don’t know what the rumours say, but I do not believe that the police at that time witnessed a murder and did not investigate it properly.”

Making statements after an event that took place at the police HQ in Nicosia on Friday, Papatheodorou, however, admitted that serious mistakes were made during the investigation and called for more sensitivity and professionalism in future similar cases.

“Should future cases of sudden and untimely death arrive, we will be able to rely on a protocol we prepared in collaboration with coroners and medical examiners, in order for investigations to be more accurate and efficient.

“As far as Nicolaou’s death, there is nothing we can do until the attorney-general reviews the reports and new findings.”