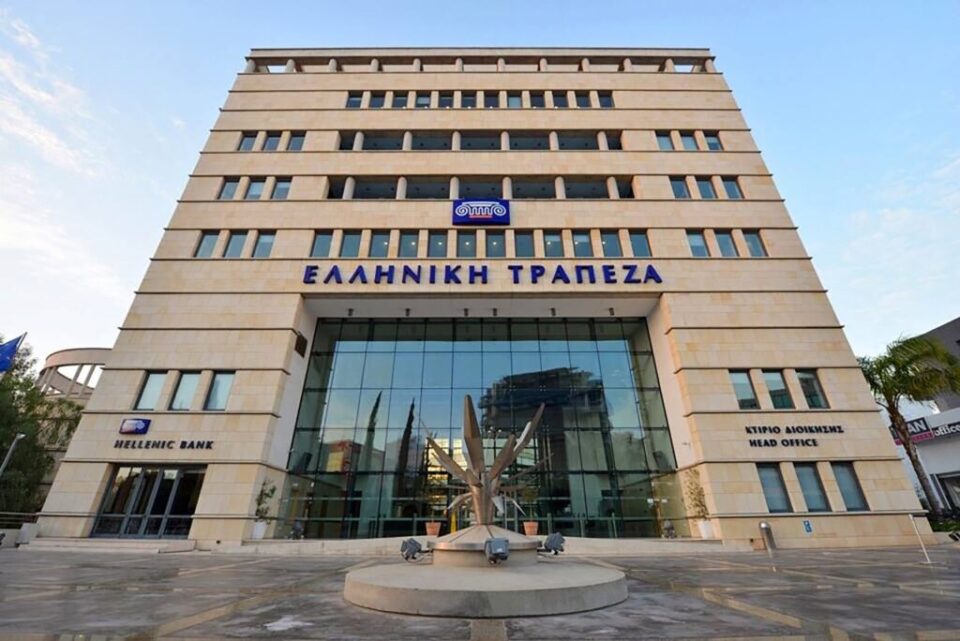 Hellenic Bank recorded an after-tax profit of €55.4 million in the first half of 2022 and announced that it has already embarked on a 3-year transformation journey

Hellenic Bank on Tuesday released its financial results for the first half of 2022, posting a profit of €55.4 million, compared to a profit of €21 million in the corresponding period of 2021.

The uptick in profitability is primarily attributed to improved income performance, continuous cost management efforts, as well as the reversal of certain impairment losses, to the tune of €11.2 million.

In addition, the bank recorded a net interest income of €133 million during this time, with a net interest margin of 1.4 per cent, while its cost-to-income ratio stood at 76 per cent.

The bank’s return on tangible equity (RoTE) in the first half of the year reached 10.2 per cent.

What is more, the bank’s new lending stood at €556 million, compared to €388 million for the same period during the previous year, marking an increase of 43 per cent year-on-year.

According to the bank, the forecast for the entirety of the current year is likely to be affected by the cost incurred during the implementation of its staff exit scheme, the completion of Project Starlight, as well as the challenging macroeconomic environment.

Project Starlight, meaning the agreement for the sale of non-performing exposures worth approximately €0.7 billion and the APS Debt Servicer, is expected to be completed by the end of the current year.

Furthermore, the bank has also acquired a portfolio of performing loans from RCB Bank, with an approximate value of €337 million, something which further improved its asset quality.

In terms of the bank’s capital position and funding, its capital adequacy ratio and CET 1 ratio stood at 20.95 per cent and 18.68 per cent respectively, with both being significantly above minimum capital requirements.

In addition, the bank successfully completed the inaugural MREL issuance of eligible senior preferred notes of €100 million in July of this year.

The bank also boasts ample liquidity, with a liquidity coverage ratio (LCR) of 473 per cent.

For the medium term, the bank is seeking to reach an NPE ratio of approximately 3 per cent, a cost of risk of 50 basis points, and a CET 1 ratio of less than 14 per cent.

Regarding its strategy moving forward, the bank has a strategic plan in place for the period between 2022 and 2024, which aims to transform the bank, addressing structural challenges, with a strong focus on digitalisation and controlling costs.

Moreover, the bank is retail-focused, and has a solid customer base and significant market share in households, with a 38 per cent share in deposits and 33 per cent in loans.

The bank has also implemented a comprehensive environmental, social and governance (ESG) strategy.

Regarding the Cypriot economy and the environment in which the bank operates, it noted that Cyprus’ GDP grew by around 6 per cent in the first half of the year, despite the war in Ukraine and the ongoing adverse effects posed by the Covid-19 pandemic.

“Despite the weak outlook, Cyprus’ economy has grown by 6.1 per cent during the first six months of the year,” he added, noting that the positive GDP growth rate is mainly attributed to the good performance of the trade, transport, and hospitality sectors, as well as other leisure-related industries.

Gatzke also stated that the interest rate environment has changed significantly with the ECB increasing interest rates for the first time in 11 years, with the rate being set at zero per cent in July 2022.

Moreover, he noted that recently interest rates were further increased to 0.75 per cent, while more increases are expected by the end of the current year.

At the same time, long-term interest rates have been hiked throughout Europe, with Cyprus’ 10-year sovereign bond reaching a maximum yield of 3.5 per cent near the midpoint of 2022, primarily due to credit spread widening, reflecting the uncertain capital market environment.

We delivered an after-tax profit of €55,4 million proving the resilience and robustness of our business model,” he added.

While touching on the bank’s new lending, risk-return profile, and capital adequacy ratio, the Hellenic Bank CEO maintained that the bank is well-positioned and committed to supporting its viable retail and business customers.

“Despite the progress, we remain watchful and particularly wary about the challenges that lie ahead, that is why we have been consistent and hence intensively working on improving the quality of our portfolio,” he stated.

Regarding the bank’s future prospects, Gatzke said that Hellenic Bank’s three-year transformation journey is on track.

“We are in the process of transforming into a customer-centric organisation, by improving customers’ experience, through digitalization, streamlining our processes and offering simple and competitive products,” Gatzke said.

“At the same time, we are enhancing the profile of our loan book through healthy growth with a strong focus on Environmental, Social and Governance issues (ESG),” he added.

Furthermore, Gatzke said that the rising interest rate environment is expected to support the bank’s core key performance indicators in the medium term.

At the same time, the bank said that it is focusing on healthy new lending with a sufficient return profile, both in Cyprus and internationally, and improving the profitability of its investment book.

“On the labour issues, I once again stress our irrevocable commitment to the signing of a new collective agreement and the formulation of an exit scheme in order to improve the cost-to-income ratio of the bank,” Gatzke said, noting that active cost management remains the core of the bank’s strategy.

“The discussions with the union are in progress and I trust that we will soon have a successful outcome, mainly for the benefit of our employees, safeguarding a healthy and
robust organisation for the future,” he concluded.