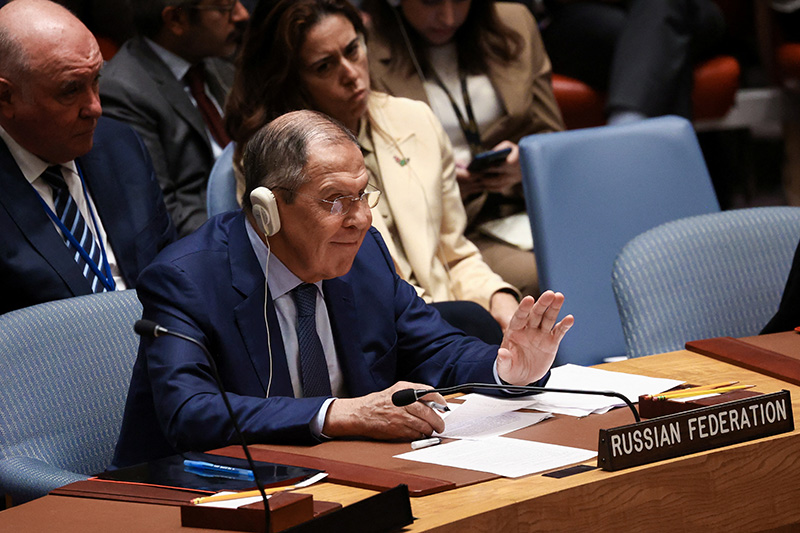 Russia's Foreign Minister Sergei Lavrov attends a meeting of the United Nations Security Council at the 77th Session of the United Nations General Assembly at U.N. Headquarters in New York City, U.S., September 22, 2022. Russian Foreign Ministry/Handout via REUTERS ATTENTION EDITORS - THIS IMAGE HAS BEEN SUPPLIED BY A THIRD PARTY. NO RESALES. NO ARCHIVES. MANDATORY CREDIT.

Lavrov was only in the council chamber to deliver his address to the meeting of the 15-member body, which was attended by U.S. Secretary of State Antony Blinken and China’s Foreign Minister Wang Yi. Lavrov did not listen to anyone else speak.

The council, which was meeting on Ukraine for at least the 20th time this year, has been unable to take meaningful action because Russia is a permanent veto-wielding member along with the United States, France, Britain and China.

Lavrov accused Kyiv of threatening Russia’s security and “brazenly trampling” the rights of Russians and Russian-speakers in Ukraine, adding that it all “simply confirms the decision to conduct the special military operation was inevitable.”

Ukraine‘s Kuleba said: “The amount of lies coming from Russian diplomats is quite extraordinary.”

Lavrov said countries supplying weapons to Ukraine and training its soldiers were parties to the conflict, adding that “the intentional fomenting of this conflict by the collective West remained unpunished.”

Blinken pledged that Washington would continue to support Ukraine to defend itself.

“The very international order we’ve gathered here to uphold is being shredded before our eyes. We can’t let President Putin get away with it,” he told the council, which met during the annual gathering of world leaders for the U.N. General Assembly.

Thousands have been killed and Ukrainian cities reduced to rubble since Russia invaded Ukraine on Feb. 24. President Vladimir Putin on Wednesday threatened to use nuclear weapons to defend Russia and moved to annex swaths of Ukrainian territory. Read full story

“Any annexation of a state’s territory by another state resulting from the threat or use of force is a violation of the U.N. Charter and of international law,” Guterres said.

Referendums on joining Russia are due to take place from Friday until Tuesday in several largely Russian-held regions in eastern and southern Ukraine, which comprise around 15% of the country’s territory.

International Criminal Court (ICC) Prosecutor Karim Khan told the council there were “reasonable grounds” to believe crimes within the jurisdiction of the court had been committed in Ukraine. The Hague-based court handles war crimes, crimes against humanity, genocide and crimes of aggression.

Khan opened an investigation into Ukraine a week after Russia’s invasion. He said on Thursday that the investigation priorities were intentional targeting of civilian objects and the transfer of populations from Ukraine, including children.

The United States has said estimates from a variety of sources, including Moscow, indicate that authorities have “interrogated, detained, and forcibly deported” up to 1.6 million Ukrainians to Russia since Moscow’s invasion.

‘NO END IN SIGHT’

The United States, Britain and other members called for Russia to be held accountable for atrocities they say Moscow has commited in Ukraine. Russia denies targeting civilians, describing accusations of rights abuses as a smear campaign.

“We must make clear to President Putin that his attack on the Ukrainian people must stop … that there can be no impunity for those perpetrating atrocities,” said British Foreign Secretary James Cleverly, adding that the world needed to reject Moscow’s “catalogue of lies.”

China’s Wang said the priority was to resume dialogue without preconditions and for both sides to exercise restraint and not escalate tensions.

At a separate event on the sidelines of the high-level United Nations gathering, human rights lawyer Amal Clooney urged countries to support a Ukraine push at the U.N. General Assembly to establish a compensation commission.

“The Ukrainian people are under fire with no end in sight,” said Clooney, who is part of an international legal task force advising Ukraine on securing accountability for Ukrainian victims in national jurisdictions and working with the ICC.

“They need to know that one day when this is all over, they can rebuild their country and their lives,” she said, adding that Ukraine may need as much as $1 trillion to repair damage inflicted by Russia.