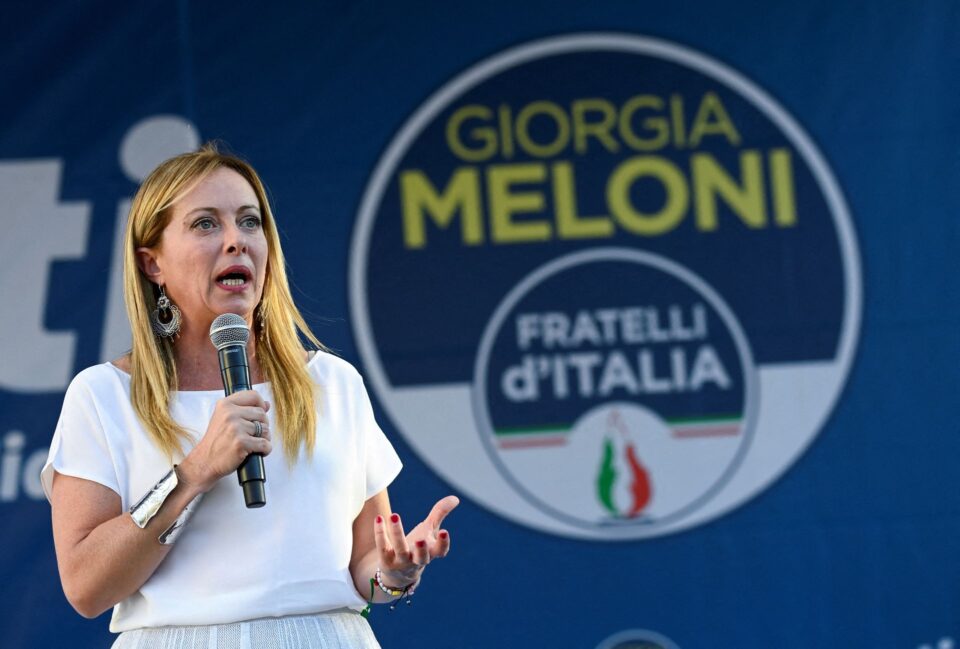 Giorgia Meloni shares her hostility to the EU with Britain’s Conservatives, her hatred of immigrants, gays and Muslims with the US Republicans, and her truculent nationalism with both . She is also militantly Christian and dabbles in ‘Great Replacement’ paranoia

There’s an election in Italy on Sunday, almost exactly 100 years after Benito Mussolini’s ‘blackshirts’ marched on Rome and brought the first fascist dictator to power.

Giorgia Meloni, the hard-right populist politician who is likely to win the election, rejects any comparison with that ugly past. The party she leads, Brothers of Italy, has some ‘nostalgic’ neo-fascists in its ranks, but she prefers to compare it to Britain’s post-Brexit Conservative Party or the US Republican Party as rebranded by Donald Trump.

She shares her hostility to the European Union with Britain’s Conservatives, her hatred of immigrants, gays and Muslims with the US Republicans, and her truculent nationalism with both those parties. She is also militantly Christian, and she dabbles in ‘Great Replacement’ paranoia. And just like them, she wages a non-stop culture war.

“There is no middle ground possible,” Meloni told a rally last June. “Today, the secular left and radical Islam are menacing our roots…Either say yes, or say no. Yes to the natural family, no to the LGBT lobbies. Yes to the universality of the Cross, no to Islamist violence. Yes to secure borders, no to mass immigration.”

The brutal simplicity of these slogans works just as well with lower-income, poorly educated Italians as it does with the same sort of people in ‘heartland’ America or ‘red wall’ Britain.  The goal is to distract them from the fact that their populist heroes really govern in favour of the rich (which explains why those leaders must be shameless liars).

Giorgia Meloni lies too, but when you compare her to populist peers like Viktor Orbán in Hungary, Jair Bolsonaro in Brazil, and Donald Trump in the United States, she actually doesn’t seem that bad.

Like them, she has no permanent political principles, just a bundle of cynical techniques for attracting distressed and desperate voters. But she needed to shift towards the centre ground to build her Brothers of Italy party up from 4 per cent of the vote in the 2018 election to a predicted 25 per cent this time – so that’s what she did.

She now claims to support both the European Union and the Nato alliance. Even before the Russian invasion of Ukraine, she avoided the pro-Putin stance that was common on the radical right in both Europe and the United States. With the fragile Italian economy teetering on the brink of recession, she is promising good behaviour to Brussels.

So not a complete disaster, then. Continued access to the EU’s Covid recovery fund, which has promised Italy €191 billion over the next six years, should keep Meloni from straying too far from orthodox economics. If the EU withholds those funds, her prospects of remaining in power would be slim.

Brothers of Italy will probably be the largest Italian party after this election, but with only 25-30 per cent of the vote she will not be able to govern alone. The problem is that the two parties she will need to make a coalition with, Silvio Berlusconi’s Forza Italia! (Go Italy!) and Matteo Salvini’s Lega (The League), are direct rivals of her own party.

Berlusconi at 85 is still a big political player thanks to his huge media empire. Salvini is willing to bring any coalition down if it improves his chances of being prime minister in a different one. Both men will be trying to claw back the popular support that Meloni’s Brothers of Italy has stolen from them, so there will be tears before bedtime.

In normal times, their chosen tactic would be to undermine Meloni’s party by pushing for harsher policies on immigration and bigger conflicts with the EU. With the Russian energy blockade promising a hard time for Europe economically this winter, however, the obvious strategy for far-right parties is to advocate a softer line on Putin’s war in Ukraine.

Both men have been Putin fanboys in the past. Berlusconi sees the Russian dictator as a personal friend, and Salvini called him “the best statesman on Earth” three years ago. Now Salvini soft-pedals his admiration for Putin, but he demands an end to the sanctions against Russia because they are allegedly hurting Italy more than Russia.

Meloni can’t afford to play that game, and the expected post-election coalition of far-right parties is unlikely to last very long. She has sufficiently detoxified herself that she could lead a coalition with other parties instead, and that may well happen.

Post-fascist parties in power in Italy are still bad news, but the damage to the European Union and the Nato alliance can probably be contained.