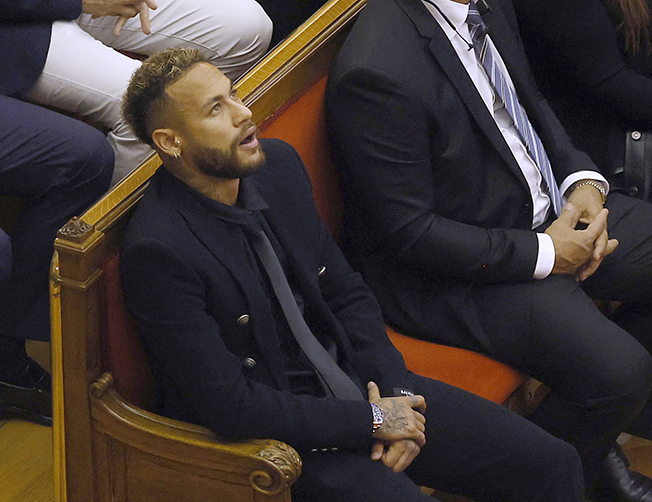 Paris St Germain and Brazil football star Neymar Jr. and eight others went on trial in Barcelona on Monday charged with fraud and corruption over the player’s transfer to Barcelona from Santos in 2013.

Neymar arrived at the court after landing on a flight from Paris where he lives. He took the time to sign an autograph for a fan at the city’s airport, Reuters witnesses said.

The case centres on the claim made by Brazilian investment firm DIS, which owned 40% of the rights to Neymar when he was at Santos, that it lost out on its rightful cut from the player’s transfer because the value of the deal was understated.

DIS has demanded a much heavier five-year jail term for Neymar, fines worth 149 million euros in total, and for the player to be disqualified from playing for the length of any sentence handed down by the judge.

Along with Neymar, 30, the defendants include his parents, representatives of the two clubs, former Barca presidents Josep Maria Bartomeu and Rosell, and former Santos president Odilio Rodrigues.

Dressed in black, Neymar and his father talked and laughed with former Barcelona president Rosell in a hall in front of where the trial started shortly after 10am.

“Neymar, with the connivance of his parents and the boards of directors of Barcelona and Santos, betrayed the trust of my clients,” DIS lawyer Paulo Nasser told a news conference in Barcelona on Thursday.

“The real cost of the transaction (between Santos and Barcelona) was 82 million euros, and only 17 million appeared as the official transfer,” Nasser said.

He said Neymar was also not sold to the highest bidder, as there were other clubs that offered up to 60 million euros for his services.

All the defendants have previously denied several times any wrongdoing.

Law firm Baker McKenzie, who is defending Neymar and his family, said in a statement that they will argue that the Spanish courts “lack jurisdiction to prosecute the Neymar family” because the transfer involved a Brazilian national in Brazil.

Neymar, a key member of the Brazil squad heading to the World Cup in Qatar next month, lost an appeal over the case in Spain’s High Court in 2017, clearing the way for the trial.

It was unclear if Neymar would be asked to stay for the whole hearing, which is expected to last seven days.

Neymar was crucial to PSG’s victory against arch-rivals Olympique de Marseille on Sunday evening, scoring the only goal of the match. The team will face Ajaccio on Friday in Ligue 1, before hosting Maccabi Haifa in a Champions League game on Oct. 25.

On Monday afternoon the court is due to hear from André Cury, Barca’s former point man in Brazil, whose statement and details on the negotiations over the player are expected to be key for the case.

Neymar is scheduled to testify on Friday, but he could seek to change the date.

The burning issue of rents