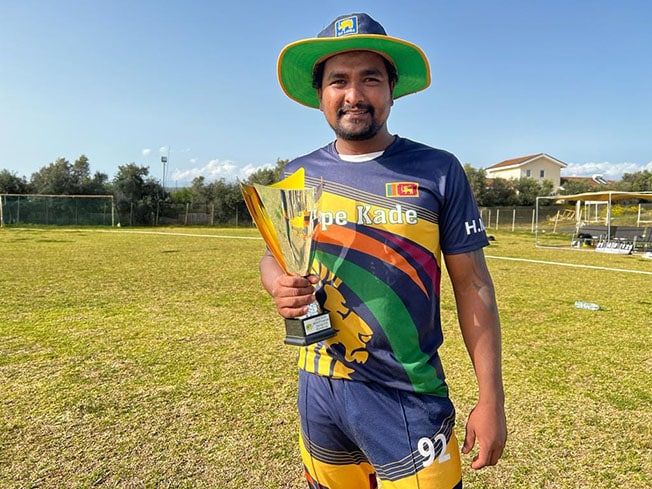 Akila De Silva of Sri Lanka Lions who had a weekend of contrasting fortunes, including a match-winning innings on Sunday

Zeeshan Sarwar led from the front as Cyprus Moufflons won the final of the 2022 CCA BAOFinancial 40-over Cup at Happy Valley on Saturday. His 90 from 51 balls enabled his team to beat Sri Lanka Lions by 5 wickets, chasing down their target of 235 in style with 8 sixes and 7 fours.

As the approaching darkness threatened to spoil the latter stages of the game, Mehran Khan hit a spectacular unbeaten 54 to finish the chase quickly before the light faded. He faced just 20 balls and hit 8 sixes, including 5 in one over, as Moufflons won in the 27th over.

Sri Lanka Lions’ score of 234 relied heavily on 77 from the batsman of the season, Chamal Sadun, but he received little support from the top order. After slipping to 141-6 the innings was revived by a battling 30 from Kamal Raiz, but they failed to bat through the 40 overs and the total seemed too small against a strong batting team.

The Lions may have felt handicapped by the absence of some regular players due to suspension, but their biggest problem was the number of catches they dropped, including, crucially, Zeeshan early in his innings – a mistake for which they paid heavily.

Moufflons for their part were celebrating another trophy; after many years without any successes, they have been experiencing a purple patch over the last year.

The day’s other match resulted in a 78-run win for Limassol Zalmi over Royal. Faisal Khan hit 110 and shared a first wicket partnership of 170 with Umar Shah (66) as Zalmi totalled 327-8 in a match reduced to 30 overs per side.

For Royal number 9 Rahul Behl made the top score of 50 as they were dismissed for 249, with Zalmi’s Asif Sajjad taking 3-34.

The Black Caps v Sri Lankans match in Group A pitted two unbeaten teams against each other, so it was no surprise that the game was a close one, which Blck Caps won by two wickets with two balls to spare. Rajinder Singh (4-25) and Rajwinder Brar (3-17) restricted Sri Lankans to 120-8, of which Ajith Kumara made 42, but the Caps then limped to 76-6 before “Pintu” Resham Singh came to the rescue with 30 not out from 18 balls to bring them to a narrow but important victory.

The top two positions in this group – and entry to the semi-finals – will be decided when Black Caps play their last match, against Riyaan on 11 December.

Two matches were played in Group D. Nicosia Tigers had a comfortable 83-run victory over Limassol Bangladeshis. Roman Mazumder scored 83 from 48 balls to set up a total of 153, before Jamil Hossin Linkon’s 3-17 helped dismiss the Bangladeshis for 72.

Sri Lanka Lions put the previous day’s disappointment behind them in beating Cyprus Super Kings by 9 wickets. Rajasekhar Poluri’s 50 helped the Super Kings to 130-8, while Suresh Gedara took 4-23. The Lions quickly knocked off the runs inside 13 overs for the loss of just one wicket, thanks to a whirlwind 41-ball innings of 95 not out by Akila De Silva (pictured), which included 9 sixes and 4 fours – perhaps some consolation after being the bowler who suffered at the hands of Mehran Khan the previous day!

Three teams are in strong contention to qualify from this group – current leaders Limassol Moufflons, Sri Lanka Lions, and Nicosia Tigers who may be considered slight favourites as they have a match in hand. Again the key date could be 11 December when the Lions and Tigers will face each other in their final group match.