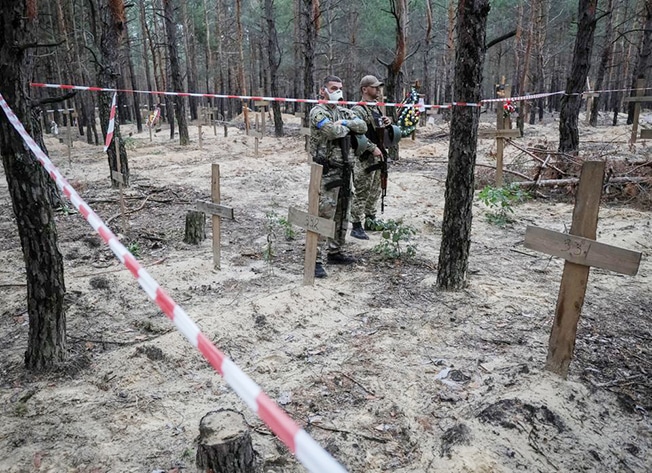 Ukrainian servicemen guard a mass grave site during an exhumationin the town of Izium, liberated by Ukrainian Armed Forces, in Kharkiv region

The Kremlin on Thursday condemned a call by a top European Union official to create a special court to prosecute possible war crimes by top Russian officials in Ukraine, saying any such body would be illegitimate and unacceptable to Moscow.

European Commision President Ursula von der Leyen said on Wednesday that such a tribunal could be backed by the United Nations, to investigate possible “crimes of aggression”. Legal experts say the crime of aggression is a leadership crime.

“As for attempts to establish some kind of tribunal: they will have no legitimacy, will not be accepted by us and we will condemn them,” Kremlin Spokesman Dmitry Peskov told reporters on Thursday.

Ukraine has been pushing for a tribunal to prosecute Russian military and political leaders over Moscow’s Feb. 24 invasion, though there has been no consensus on what form such a body might take.

U.S. President Joe Biden and French President Emmanuel Macron, who met in Washington on Thursday, said in a joint statement that they were committed to holding “Russia to account for widely documented atrocities and war crimes … through support for international accountability mechanisms.”

Ukraine and Western countries have alleged multiple counts of Russian war crimes during the nine-month war, including in the town of Bucha which Russian forces occupied.

Russia denies targeting civilians or having committed other war crimes, and has accused Ukraine’s forces of breaching international law and the Geneva Conventions during the conduct of what Moscow calls its “special military operation”.

The EU Ambassador to the U.N., Olof Skoog, later said while von der Leyen and EU foreign policy chief Josep Borrell had expressed support for the EU taking a lead to develop an accountability mechanism for crimes of aggression in Ukraine, the issue still needed to be discussed by EU leaders.

“There is a European Council … in the middle of December when this will be discussed based on some options that have been put on the table,” he told reporters in New York, adding that the EU was discussing the issue with Ukraine.

Skoog noted the issue was “legally quite complicated” and that U.N. endorsement of such a tribunal could boost its legitimacy and help strengthen implementation.

“We’re working with Ukrainians on that, but first of all, there needs to be a conversation in the EU,” Skoog said.

The 193-member U.N. General Assembly could adopt a resolution to back the creation of a tribunal, diplomats said, given the 15-member Security Council is unable to take any action itself because Russia wields a veto. General Assembly resolutions are not legally binding but carry political weight.

The Hague-based International Criminal Court (ICC) launched an investigation into alleged crimes against humanity and war crimes days after the invasion, but it does not have jurisdiction to prosecute aggression in Ukraine.

An act of aggression is defined in the Rome Statute of the ICC as the use of armed force by a state against the sovereignty, territorial integrity or political independence of another state. It is committed by a person who controls or directs the political or military action of a country.