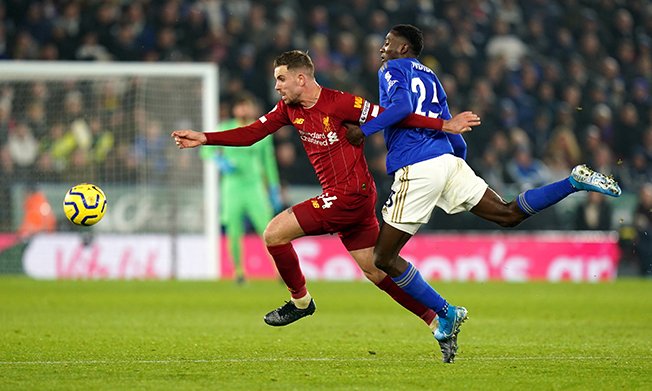 epa08091350 Liverpool's Jordan Henderson (L) in action against Leicester City's Wilfred Ndidi (R) during the English Premier league soccer match between Leicester City and Liverpool held at the King Power stadium in Leicester, Britain, 26 December 2019. EPA-EFE/TIM KEETON EDITORIAL USE ONLY. No use with unauthorized audio, video, data, fixture lists, club/league logos or 'live' services. Online in-match use limited to 120 images, no video emulation. No use in betting, games or single club/league/player publications.

Match-by-match facts and statistics ahead of the ninth round of Premier League fixtures from Nov. 21-23 (All times in GMT):

* Newcastle have lost only one of their last seven Premier League home games against Chelsea (W5 D1).

* Chelsea’s new signing Timo Werner has been involved in nine goals (seven goals and two assists) in his last seven games in all competitions, having scored in each of his last four.

* Villa have not lost to Brighton in their last eight Premier League meetings (W4 D4).

* Brighton have not defeated Villa at Villa Park(D3 L9) and have lost each of their five games in the top flight.

* Villa captain Jack Grealish has scored in four successive games against Brighton in all competitions.

* Spurs are undefeated in their last seven league games (W5 D2), the longest run in the Premier League this season.

* Man City have lost just once in their last seven league meetings with Spurs (W4 D2).

* Spurs striker Harry Kane has scored 13 goals and provided 10 assists in all competitions this season. His 23 goal involvements are the most of any Premier League player.

* Man United have failed to win a Premier League game at home this season (D1 L3).

* West Brom have won three of their last five league games at Old Trafford, including a 1-0 victory in their most recent meeting in April two years ago.

* Man United have failed to find the net in three of their last four home league games against West Brom.

* Fulham had failed to defeat Everton in 10 successive league games (D2 L8) before their 2-0 victory in April last year.

* Everton have failed to win a Premier League game without Brazil forward Richarlison in the squad since his arrival in 2018(D4 L4).

* Sheffield have won each of their three home Premier League games against West Ham.

* Sheffield have not lost to a London side in their last 11 Premier League games at home (W10 D1).

* West Ham have not lost to a side starting the day at the bottom of the table in their last 11 Premier League games.

* Arsenal have won four successive away games against Leeds.

* Leeds have conceded the joint-most goals in the Premier League this season (17).

* Arsenal have lost three of their last four Premier League games, failing to score in each of those defeats.

* Liverpool are unbeaten in 63 successive home league games. Their last league defeat at Anfield was against Crystal Palace in April three years ago.

* Liverpool have won each of their last three home league games after conceding the first goal. Juergen Klopp’s side have also conceded more goals in the first half of games than any other club in the Premier League this season (11).

* Burnley have won just one of their last five Premier League meetings with Crystal Palace (L4).

* Burnley have failed to win a Premier League game this season (D2 L5) and have lost each of their three matches at Turf Moor.

* Southampton have won just one of their last eight league meetings with Wolves (L4 D3).

* Wolves have kept the most clean sheets in the Premier League this year (13).

* Wolves forward Raul Jimenez has scored 14 winning goals in the Premier League since their promotion in 2018, second only to Liverpool’s Mohamed Salah (17).