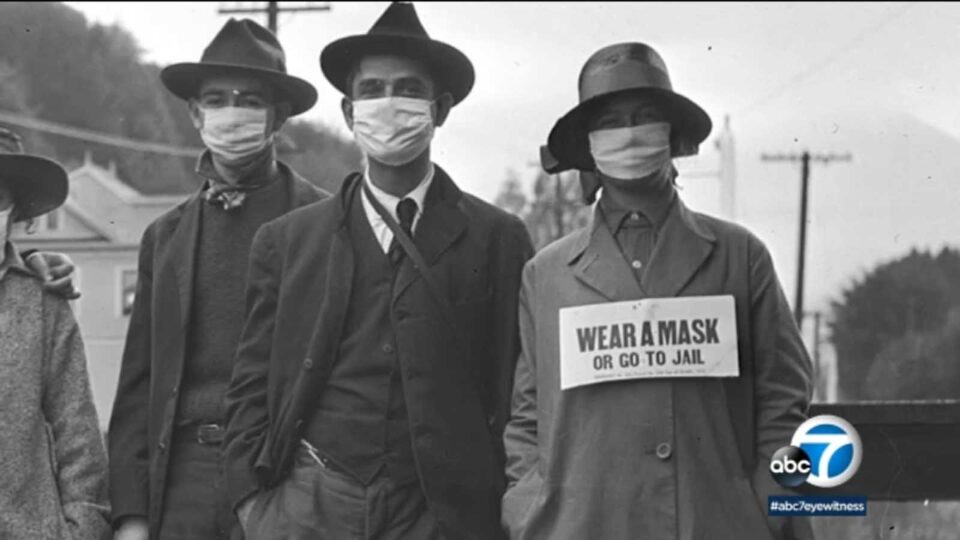 Masks Were Also Worn Against The Spanish Flu

Back in early March, with talk of coronavirus starting to ripple through the world, I was having dinner with friends and mentioned corona’s more illustrious predecessor: Spanish flu in 1918-20, the worst pandemic of the 20th century. To my surprise, no-one seemed to know what I was talking about, prompting Wikipedia checks around the table – pretty shabby treatment for a virus that infected 500 million people (a third of the world’s population at the time) and killed about 50 million.

Eight months later, I set out to write a feature about the impact of Spanish flu in Cyprus, if only to take my mind off Covid-19 and hopefully provide some perspective – only to find, once again, that this great global calamity had been somewhat forgotten. Maybe it’s because so much else happened around that time: the Russian Revolution in 1917, the end of WWI in 1918. Yet the flu killed more than double the number who died during four years of war, stretching (like Covid) from the US to India, Peru to Australia, Kenya to Spain itself.

Cyprus, of course, wasn’t spared – but where to begin? The invaluable Ruth Keshishian at the Moufflon bookshop went through her voluminous collection of history books and found a reference to Spanish flu having struck our island in the winter of 1918-19 (the second, and deadliest, wave). Author and researcher Diana Markides supplied further leads, including a reference to a medical history called Medicine in Cyprus: From Antiquity to Independence, published by the Laiki Group Cultural Centre in 2006.

That in turn led me to the Bank of Cyprus Cultural Foundation, which has taken over the old Laiki archives. Dr Christodoulos Hadjichristodoulou kindly allowed me to browse through the book, as well as their small collection of old newspapers (ending, serendipitously, with December 1918). I also visited the Cyprus State Archives, looking for official documents from those years.

It wasn’t all plain sailing, indeed it sometimes felt like coronavirus itself might be secretly conspiring to suppress information on its ancestor. The state archive couldn’t accommodate me for over a month, having drastically reduced the number of researchers it can take due to social distancing. (It also requires two separate appointments, once to select your files and once to view them.) The Press and Information Office, where I’d hoped to dig up more old newspapers, had a case of Covid and closed its doors to the public for weeks on end. For a while, it looked like the story might be more trouble than it was worth.

In the end, I’m glad I persevered – not least because I was reminded, incidentally, of another forgotten truth, namely the importance of newspapers. Weekly papers from 1918-19, which I ended up locating at the Archbishopric library in old Nicosia, gave by far the most vivid depictions of that awful winter when influenza ravaged the island; it made me wonder what reporters of the future will find, 100 years from now, when they research coronavirus and attempt to track down the media reports of today. Will they all be on ‘the Cloud’ (whatever that is) and, if so, which faceless tech conglomerate will control access to them? Thank goodness for the handful of newspapers – including this one – that continue to publish a print edition, leaving behind some physical archive.

As for details of the pandemic itself… well, that’s in the article, of course, but it’s clear that the flu hit Cyprus hard – though more of a short sharp shock, unlike coronavirus which seems to be dragging on forever. For most of December 1918, deaths occurred daily in many or most villages, plus of course in the towns – a total that would surely have been in the hundreds, though precise statistics haven’t been kept. The situation may be summed up by a rather desperate editorial in Eleftheria, dated December 28, warning that unless something was done soon, “we [may] be faced, before too long, with an island that has literally been desolated of all human life”. Wait, seriously? A virus that might potentially wipe out the entire population of Cyprus? Take that, Covid!

Above all, the story offered a glimpse of a very different Cyprus from a century ago – a dangerous, disease-ridden island (I even found a reference to a mass escape from a leper colony, also in 1918!) that nonetheless took this mother of modern pandemics more or less in its stride. Schools closed briefly, to be sure – the flu, unlike corona, was just as lethal for kids as adults – masks were worn in the streets, protective measures were announced (including instructions for people to spit in special spittoons). Unlike today, on the other hand, businesses stayed open and social life continued, albeit with precautions.

That’s not to say that our early-20th-century ancestors were smarter or wiser. If we worry more about this disease, it’s only because we’ve largely eradicated all the other diseases they had to suffer; no-one would choose to live in 1918, where public health is concerned. What researching the past shows quite vividly, however, is that life goes on – by definition, or we’d never have made it to the present! By mid-1919, Cypriots’ attention had turned to other matters. As we head into 2021, let’s remember: this too shall pass.