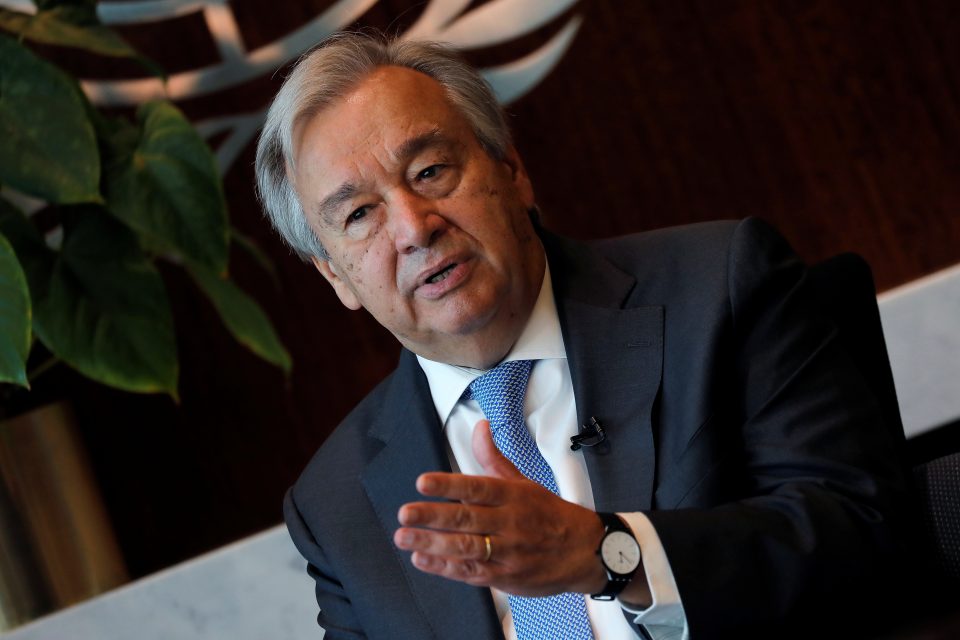 While UN secretary general Antonio Guterres intends to invite all sides to a five-plus-one conference to explore if common ground exists to negotiate a solution to the Cyprus problem, in his latest report he commented on the scepticism on both sides over prospects for a return to peace talks.

“At the time of writing this report, scepticism regarding the prospects for a return to the peace talks has risen in both communities, with analysts regularly pointing out the divergent positions declared publicly by Mr Anastasiades and Mr Tatar, including on the central issue of the model for a settlement to be pursued,” Guterres said in his report to the Security Council Good Offices Mission, an unofficial version of which was released on Saturday.

But Guterres made clear that “time is working against a mutually acceptable political settlement in Cyprus.

“The status quo, continuing for so many decades, is not static. Changes are happening on the ground that may become irreversible, should the two communities not recommit themselves to resolving their differences peacefully, proactively and with determination,” he said.

Guterres said both sides and the guarantor powers have expressed a willingness to attend an informal five-plus-one meeting under his auspices.

His special representative Jane Holl Lute will arrive on the island on Sunday with new talks with the two leaders scheduled for Monday.

“The purpose of this meeting will be to determine whether common ground exists for the parties to negotiate a sustainable, lasting solution to the Cyprus problem within a foreseeable horizon. I intend to invite the sides and the guarantor powers to this informal meeting as soon as practicable in 2021,” Guterres said.

He also reiterated that “this time must be different, and this informal five-plus-one meeting will help clarify the true extent of the commonality of vision and outline steps necessary to chart a way forward.”

He said the postponement of the Turkish Cypriot leadership elections from April to October and the drawn-out campaigning significantly extended a period of political uncertainty.

“It also highlighted the stark division between political stakeholders in the Turkish Cypriot community on the future of the peace process. These differences had grown steadily following the closure of the Conference on Cyprus in July 2017,” he said, pointing out the political landscape on the island has changed in that time.

“I reiterate my call and that of the Security Council for the avoidance of any unilateral actions that could raise tensions on the island and undermine the return to dialogue and the future success of talks. It is critically important that all parties engage in dialogue in order to resolve their differences and resume a viable and comprehensive negotiation process,” Guterres said.

The UNSG said he follows with deep concern the “rising tensions” in the Eastern Mediterranean, including tensions over hydrocarbons exploration and maritime boundary delimitation.

He stressed that “natural resources located in and around Cyprus should benefit both communities and constitute a strong incentive to reach a mutually acceptable settlement without any further delay.

“A comprehensive settlement in Cyprus constitutes the best chance for resolving matters of contention between the two communities on the island. A settlement has the potential to unlock collaborative and mutually beneficial solutions for Cyprus as well as the broader region,” the UN chief added, stating that concrete steps towards peace on the island could also help alleviate tensions “between Greece and Turkey, both guarantor powers in the Cyprus context.”

Stressing that confidence-building measures for Cyprus continue to be important, he encouraged both sides to put forward proposals and ideas, or to review past proposals, so that discussions and progress can be pursued.

“As the pandemic has continued its devastating, global march, long-standing fractures both within and between the two communities have widened and opportunities to wage a united fight to contain the spread of the virus and mitigate its impact have not been seized.

“As this report outlines, despite my calls, and the call of the Security Council for the sides to cooperate effectively, particularly in these challenging times, there continued to be limited coordination on the Covid-19 response via the technical committees and a lack of bicommunal or joint approaches to managing the impact overall,” he said, pointing out that “these bodies remained underutilised during a time when cooperation could have improved the daily lives of Cypriots on both sides of the divide, given the adverse public health and economic effects island-wide.”

Regarding the decisions by both sides to restrict crossing points, without consultation with the other community, Guterres said that “while mindful of the need to put public health and safety first, I encourage the leaders to discuss and harmonise the protocols governing crossings and to mutually agree on the re-opening of the remaining crossing points as soon as feasible.”

In the report Guterres also recommended the Security Council extend the mandate of Unficyp for six months, until July 31, 2021, in light of the force’s continued contribution to peace and stability on the island.

He said he deplores restrictions on the freedom of movement of Unficyp imposed, inter alia, in Varosha and Strovilia, and requests that the mission’s ability to patrol and implement its mandated activities be fully restored.

Sugar: the number one endocrine disruptor