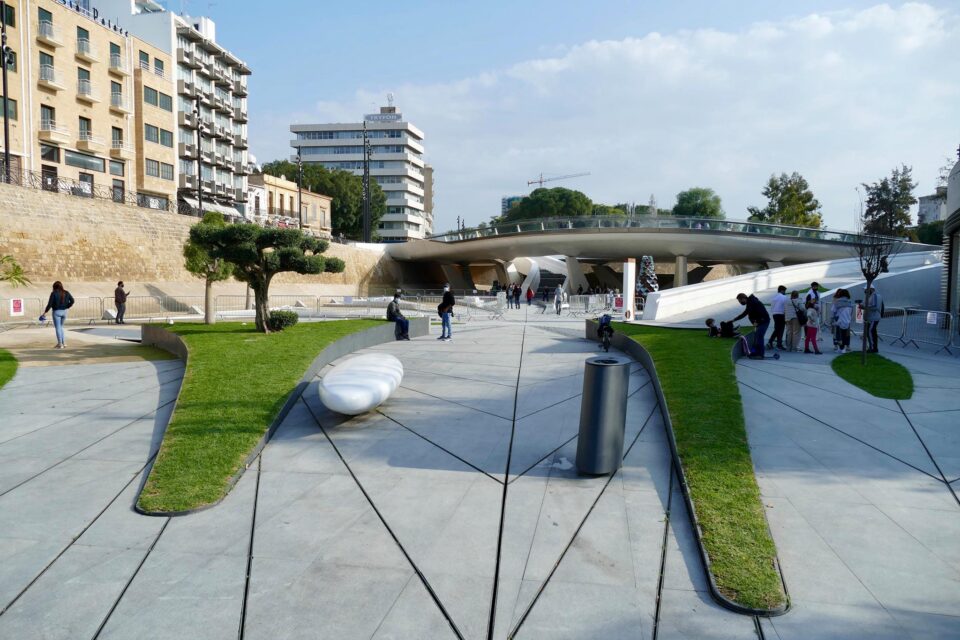 Controversy may well always dog the Nicosia square project, but Nicosians can now sigh with relief that bar a few finishing touches, it is finally complete

Eleftheria square in Nicosia was finally liberated from most of its construction site shackles on New Year’s Day, nine years – and at least €40 million – after work began, and people descended upon the old town to judge the controversial ultra-modern project for themselves.

The moat section of the new square was ushered in amidst the backdrop of the impending coronavirus lockdown, which was finally announced on Friday, and explains the crowds who came out to hurriedly view an area out of bounds for nearly a decade. The upper bridge section was opened in December 2018.

Groups of families and friends trekked across the upper section, down into the moat and up again – some quietly soaking in what it all meant while kids sped across the smooth concrete on scooters with flashing rave lights on the wheels.

“It’s nice but it just doesn’t feel like it belongs here. We’re stuck with it now obviously, but it’s the sort of thing you’d see in Dubai. Yeah, it’s trying to look fancy and modern, but it’s out of place. It looks more like a simulation,” Jessica Christodoulou, 28, told the Cyprus Mail.

Her comments reflect the way the project has divided Nicosians. Since its inception under one-time mayor Michael Zempelas in 2005, no project in Nicosia has been more controversial or exhausting.

Framed within the old Venetian fortifications, the minimalist, concrete heavy edifice designed by the late Iraqi ‘starchitect’ (star-architect) Zaha Hadid boldly juts out across the moat, like the bow of a ship, leaving the old city’s trademark Venetian walls tucked away behind.

Hadid’s plans were immediately criticised by many for not fully respecting the city’s history and being totally out of place.

“The only feature of this city was its historical fortifications, we managed to find a way to hide that away and produce something that has nothing to do with this island, its history, its character, physiognomy,” she told the Cyprus Mail.

“Now nobody can condemn other people for destroying our cultural heritage because, this time, we did it all by ourselves.”

Nitsa Ioannou, 54, said she had tried hard at the beginning to reserve judgement until she saw the end result.

“But it’s so out of keeping,” she told the Cyprus Mail after strolling through the moat. “You can hardly see the old walls, the whole edifice is overpowering and it’s all so white. It will be blinding in the summer. And where is the shade?”

But many others are upbeat and do not see the options as binary: “Honestly, I mostly like it [and] I think people complain too much,” Andreas Hadjiyiannis, 32, told the Cyprus Mail.

“I mean the whole point of it is to portray a contrast between old and new I think, and the city blends them together,” he said.

John Ioannou, 25, who works in the IT sector in London half-joked that seeing Nicosia in such a modern light could almost convince him to move back.

While the design itself was heavily criticised well over a decade ago, what soon overtook the narrative were the seemingly endless missed deadlines.

When the familiar hydra of Cyprus reared its heads – incompetence, bureaucracy, allegations of corruption (collusion amongst contractors) and even archaeological finds, both supporters and critics of the project gradually resigned themselves to the fact that the centre of the old town was to become an endless construction site.

But, ironically, what was once a gaping wound in the heart of the capital may have turned up fashionably late to the rejuvenation of the old city – and be more suited to the Nicosia of today, rather than five years ago.

By January 2021, multiple renovation works (such as that on Stasinou, Stasikratous, and soon Makarios) have paved the way for a pedestrian friendly city centre just as the old town has become increasingly trendy.

There are now two high-rise towers donning the skyline near Eleftheria Square, (most recently the 34-storey 360 building).

“It’s strange but I think it’s better that the project was so late and delayed, I think it fits better now with how Nicosia has changed over the last five to ten years, the towers in the background prove that I think,” George Kyriakides, 36, told the Cyprus Mail.

At the foreground, towards the children’s play area of the moat, is the revamped Solomou bus station.

These factors are crucial, as back in 2005 when tenders were first submitted for the project, the old town was viewed by some as dusty, dingey and dangerous.

A facelift of Eleftheria Square was meant to help bring the old town out of its long-neglected state of disrepair. It also sought to symbolise Cyprus as the fresh-faced European Union member which it was back in 2005 and launch the island into the new era.

It was also touted as a means to draw in investment, bring back the crowds to the once bustling city centre and modernise the area – all of which has already been largely achieved despite the major inconvenience of the construction site, which the square became.

Onasagorou which runs parallel to Ledra Street has taken off in popularity, as have the surrounding neighbourhoods further within the walls, such as Ermou Street.

As construction began on February 6, 2012, it wasn’t long before the first phase deadline was missed – on July 1, 2012 – setting in motion a stop start timetable which continues to this day.

The square was never going to rival the Empire State Building, which almost unbelievably went from construction beginning on March 17, 1930 to a grand opening a mere thirteen and a half months afterwards on May 1, 1931. But as the years passed it was feared that it would more likely follow in the footsteps – albeit with far less grandeur – of Barcelona’s Basilica de la Sagrada Familia, whereby construction began in 1882 and to this day is still not completed.

To this day, the Eleftheria square project is not officially complete either: access to the moat area last week was granted by the municipality to facilitate the newly operational Omirou avenue underground carpark.

The Nicosia municipality told the Cyprus Mail that fine tuning works are ongoing, such as marble work under the bridge and the interior areas of the planned cafes.

And so far, there is no final cost for it either. Expenses currently stand at €40m for the square alone, 85 per cent of which is funded by the EU.

Ultimately, however, the saga of Eleftheria square most closely resembles Berlin’s new airport.

Construction began in 2006 on the BER airport, which had originally been due to open in 2011. But construction problems and technical issues saw the date pushed back repeatedly and finally opened on October 31, 2020.

“There is no big party. We are just going to open,” a German politician announced, and much like in Berlin, Eleftheria square opened to the public with an almost embarrassed and uncertain feel to it.

September 1, 2017: deadline for opening the bridge to the public missed
January, 2018: Part of the upper section opened to public

December, 2018: Another section of bridge opened to public

A cultural shift in international education