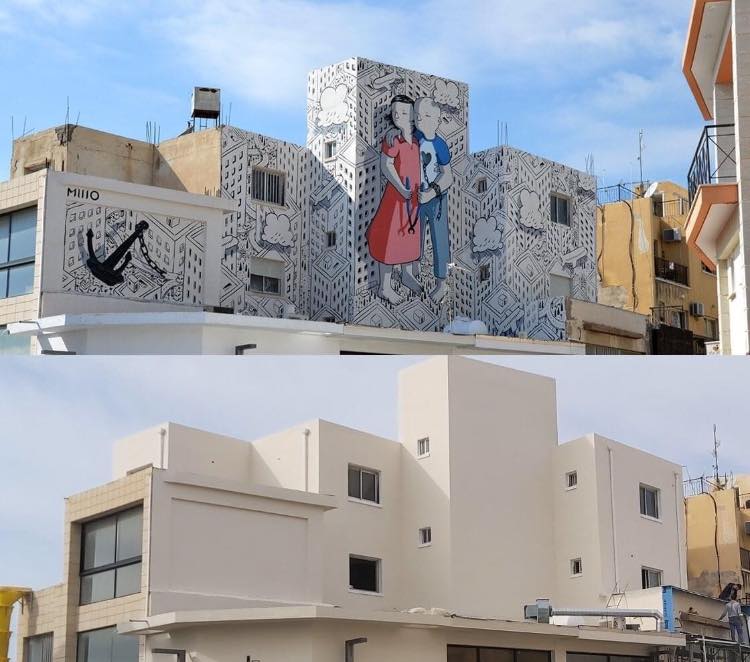 The artwork has now been painted over

Paphos has reacted with anger after original wall art painted by a world-renowned Italian street artist, which was part of the town’s Capital of Culture 2017 events, has been destroyed and painted over.

A huge outpouring of support for Italian artist, Millo, and apologies on behalf of Paphos are flooding social media after he posted pictures of the artwork alongside the now painted over wall.

Hundreds of people, including officials of Pafos2017, have shared their anger and embarrassment in comments on the artist’s Facebook page, which has 61,000 followers, and their own social media spaces.

The building is privately owned according to a staff member at Paphos municipality, who told the Cyprus Mail that the whole building had been repainted including the artwork.

“They even painted over this art work, it’s a terrible mistake and shouldn’t have happened,” he said.

Three years ago, Pafos2017 proudly hailed the artist’s participation in the year’s events and announced: ”The city of Paphos, the institution of the European Capital of Culture Pafos2017 and the Cypriot public will soon have the honour to welcome in our country, the internationally acclaimed Italian artist Millo, known for his distinctive style.

“Art lovers and the broader public will have the chance to watch the artists at work as they create their impressive large-scale murals, as well as admire the murals completed in 2016.”

Sakellis commented under the social media post: “Really sorry brother! We are all as much upset as you are here in town.”

According to daily, Politis, no contract was made with individuals and the street art that was created in the context of Paphos2017 are all at the mercy of the building owners since no public spaces were chosen to host the artistic creations.

This means that the local municipality can’t protect the murals, since there is no legislation that allows local authorities to prevent the respective owner from proceeding with changes and renovations of private property.

The only avenue open to the authority, is to declare a building as protected based on the Law on Urban Planning and Housing, and so impose restrictions on the owner.

The paper quoted Paphos mayor Phedonas Phedonos as saying that in 2021 the municipality will select three points in the city centre for the creation of new street art at the expense of the municipality.

“Public buildings should have been selected,” he said, “so that today the municipality of Paphos could maintain and protect graffiti.”

They also stressed that they are fans of art and did not want to destroy artistic creations.

“As the then president of the Pafos 2017 , European Capital of Culture Organisation, I feel ashamed. Please accept our apologies,”Christos Patsalides, posted on Milo’s Facebook.

Former artistic programme director at the organisation Pafos2017 European Capital of Culture, Georgia Dötzer, commented:”So sorry for this dear Milo. The city has lost a beautiful point of reference thanks to your excellent work. Such a shame, we are not only sad, but really angry about it.”

She also posted on Facebook under a shared photo or the art work and now bare wall: “A city that has been the European Capital of Culture in its very recent past should have the least sensitivity to preserve and preserve the works that remind it and not to consent to their destruction. An emblematic landmark of the city gave way to another white wall!”

An angry supporter wrote: “It’s OK, we never deserved it. We have no clue about culture and arts, it was a total waste of your time and amazing talent. Maybe next time you charge them 10-20,000 euros so they can appreciate it. And then send someone to erase it. After they pay of course!!!”

Another summed up the general feelings of the Paphos public as she wrote, “We who live in Paphos are very angry and upset about it. Your work made living here much brighter!”