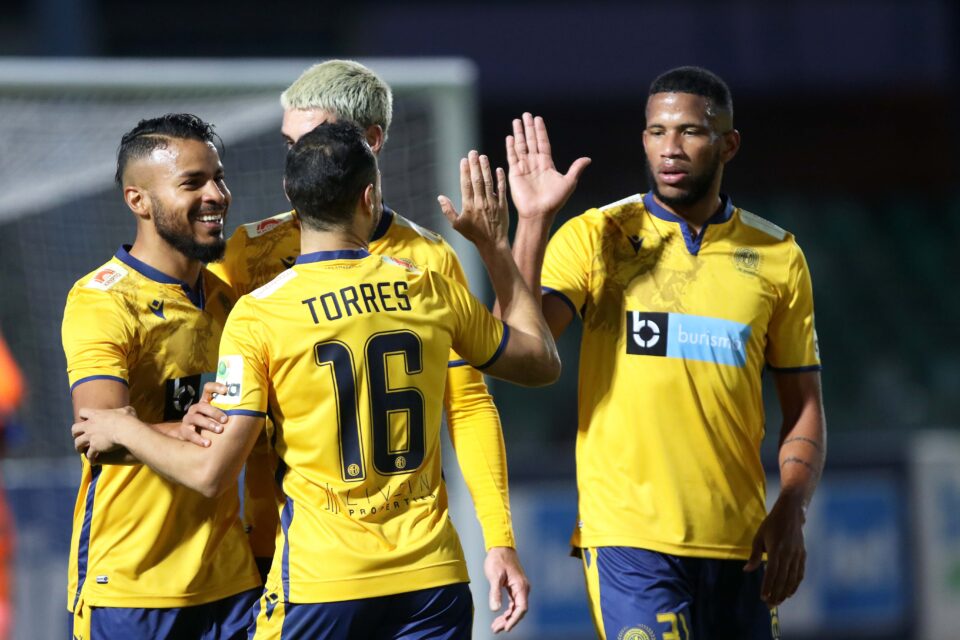 While AEL were generally comfortable throughout most of the game and created a number of opportunities to score as reflected in the final result, it was Doxa who actually had the better start, winning a penalty in the opening minutes.

Doxa’s top scorer Berat Sadik took the responsibility of converting the penalty which he duly managed by sending the keeper the wrong way to put his team ahead.

While Doxa were uplifted by their goal, holding the ball well and having another opportunity through a Sadik half-volley in the 20th minute, it was AEL who reacted to take the game by the scruff of the neck.

The hosts were awarded a penalty of their own in the 36th minute which was scored by Moroccan forward Ryan Mmaee.

Although the penalty was on the soft side, referee Neokleous deemed that the defender’s hands on the opposition player’s waist were enough to merit a spot kick.

Ryann Mmaee was arguably the man of the match for AEL as he not only converted the penalty to tie the game, but he also put the home team ahead in the first half when he scored a header in the 43rd minute.

Mmaee met an inswinging corner taken by Torres which caught Doxa goalkeeper Damjan Shishkovski flat-footed and in the wrong position to intervene.

AEL maintained their superiority in the second half, keeping possession of the ball and generally being in control of the game.

They threatened to score a third goal in the 63rd minute when Mmaee found the net again but the goal was chalked off as Torres, the player who provided the pass to Mmaee, was in an offside position.

However, it did not take long for AEL to kill the game when Torres put the ball in the net a mere two minutes later.

Danilo Sousa Campos went on a marauding run on the left before cutting inside. Danilo then passed to Riera on the edge of Doxa’s box who quickly laid the ball off for the oncoming Torres on the right who coolly shot past Shishkovski.

AEL are now just two points behind leaders Apollon, while Doxa remain in sixth place and can potentially be overtaken by a number of sides who are within touching distance.

In Friday’s evening game AEK Larnaca came back from a goal down to defeat Ermis Aradippou by 3-1 thanks to a hat-trick by their perennial top scorer Ivan Triscovski.

Ermis took the lead in the 19th minute after AEK’s Schouterdens back pass was intercepted by Valpoort who beat Moll from inside the penalty box.

Ermis’ lead did not last long as four minutes later Triscovski beat Caique from the penalty spot and by half time he added two more.

First he slid the ball into an empty net with Caique out of position, and then made the most of Spoliaric’s clever through ball.

Much as Ermis tried in the second half to get back into the game they rarely troubled AEK and it was the Larnaca team who had the more clear-cut opportunities to score.