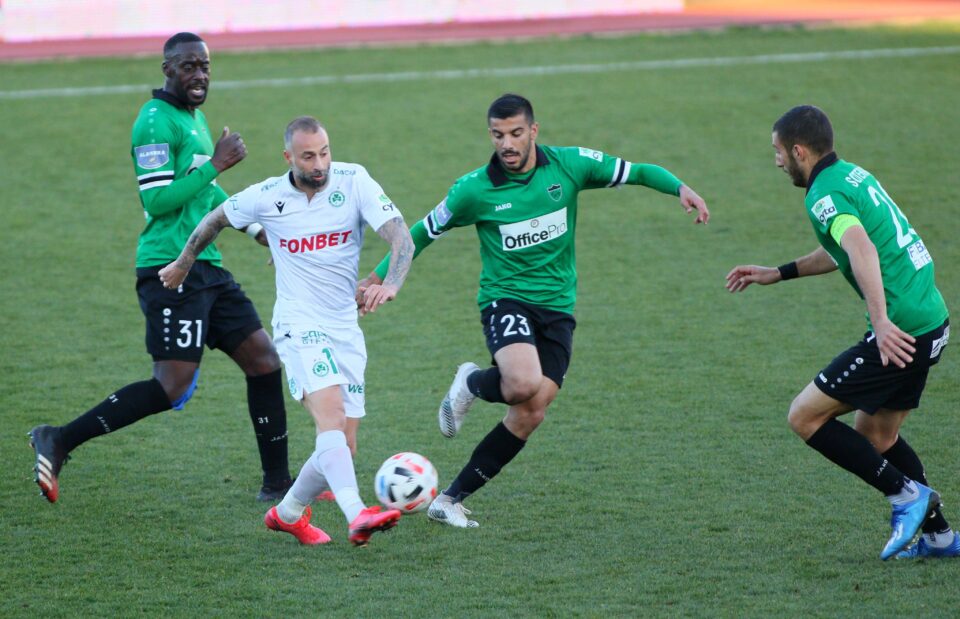 Omonia have stumbled at home after drawing 1-1 with Olympiakos at GSP Stadium.

Despite the two dropped points, Omonia have caught up with Apollon at the top of the table, matching the Limassol club’s tally of 44 points.

Apollon will have a chance to retake the lead at the top on Saturday when they face Omonia’s bitter rival Apoel in Limassol.

The game started with a moment of silence for former Omonia player and manager Andreas Konstantinou, who was also known by his nickname ‘Esso’.

Konstantinou managed Omonia in the 1974-1975 season, six years after having completed a decade at the club as a player.

Konstantinou’s Omonia playing career lasted between 1958 and 1968, in which he registered 158 appearances and scored 58 goals.

Konstantinou had the distinction of being the only Cypriot manager to have won a league title with Omonia.

In terms of the game itself, Omonia started the game as generally the better side, creating a couple of promising opportunities in the first ten minutes.

Olympiakos took a few minutes to settle into the game, weathering Omonia’s initial pressure before having their first attempt on goal through Gustavo Costa, whose long-distance shot went over Fabiano’s bar.

Although Omonia responded through three attacking situations with Papoulis involved in all three, including a shot from inside the penalty area which went out wide, it was Olympiakos who truly took the initiative.

Olympiakos threatened to break the deadlock in the 25th minute when Fabiano blocked a great shot from Stanislav Kostov.

Omonia ended up conceding three minutes later, when a long ball was poorly dealt with by Jan Lecjajs, allowing Fabrice Kah to make the ball his own in the final third before unleashing a thunderbolt of a shot from long range to send the ball fizzing past Fabiano.

The visitors had an even bigger chance to double their lead in the 31st minute when a brilliant mazy run by Kah on the left allowed the winger to make his way into Omonia’s penalty area. Kah then cut the ball back for the well-placed Kostov whose first-time shot mere yards away from goal sent the ball straight towards goalkeeper Fabiano.

Omonia found an equalizer in the 40th minute when Loizou’s left-footed shot from the edge of the penalty area was parried into the path of the onrushing Papoulis by the Olympiakos goalkeeper. Papoulis had no trouble slotting in the rebound shot into a half-empty net.

In the second half, Olympiakos had the first major chance to retake the lead in the 61st minute, when another Kah run from the left resulted in the winger feeding the ball to Marios Pechlivanis, but the Cypriot midfielder’s shot from close range was blocked by Tomas Hubocan. Olympiakos appealed for a handball, but upon closer inspection, the ball was not handled by the Omonia defender. This was also verified by VAR.

Omonia could have scored in the 86th minute through Marko Scepovic but the Serb’s shot hit Neofytos Michael’s side netting.

The hosts had another opportunity to find a second goal in the 92nd minute when Thiago had a shot just outside the area but the ball flew over the bar.

AEL missed the chance to join Omonia and Apollon at the top of the league table as they were also held to a 2-2 draw by a vibrant Ermis Aradippou in Friday’s evening game.

AEL took the lead in the 36th minute after Mae stabbed the ball past Ermis’ goalkeeper Finirides from Torres’s pinpoint cross.

Two goals by Ermis striker Roushias early in the second half turned the game on its head but Antoniou salvaged a point for the Limassol side beating Finirides from an acute angle in the 70th minute.

Italy blocks sale of missiles to Saudi Arabia and UAE