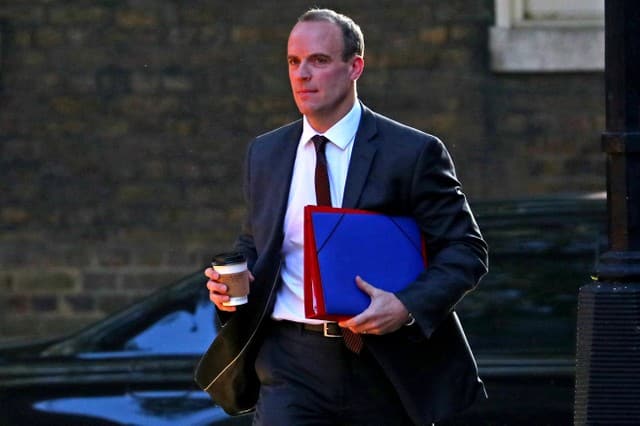 British Foreign Secretary Dominic Raab is due in Cyprus on Thursday for a short visit for contacts with the two leaders and Special Representative of the Secretary-General Elizabeth Spehar, it was reported on Friday.

According to the Cyprus News Agency, Raab will be on the island for less than 24 hours for meetings with President Nicos Anastasiades, Spehar, Foreign Minister Nikos Christodoulides and Turkish Cypriot leader Ersin Tatar.

This is the first visit of a British Foreign Secretary to Cyprus after that by Boris Johnson, who visited in 2016 when he was foreign secretary. The UK is one of Cyprus’ guarantor powers, along with Greece and Turkey.

Raab’s contacts are expected to focus on the five-party summit to be convened by UN Secretary-General Antonio Guterres in early March.  According to media reports on Friday, the summit might take place in Geneva after all, instead of Greentree, New York, due to the bad epidemiological situation in the US.

Raab is scheduled to meet with Anastasiades in the morning and afterwards with Spehar, with whom he is expected to discuss, among other things, issues concerning Unficyp.

The British minister will then have a private meeting with his Cypriot counterpart to be followed by expanded talks between the delegations of the two countries. Apart from the Cyprus problem and the forthcoming informal meeting, Christodoulides and Raab are expected to discuss the bilateral relations of Cyprus and the UK after Brexit, the situation in the eastern Mediterranean and regional issues. The two ministers will make statements to the media after their talks.

He is to meet Tatar in the afternoon. The Turkish Cypriot is to also hold consultations next week with Turkish Foreign Minister Mevlut Cavusoglu who is expected to arrive in the north for coordination ahead of the five-party summit.

Guterres said on Thursday that he intends on convening in early March an informal five plus one meeting (the two communities, the three guarantors and the UN).

He said that though his mandate from the UN Security Council refers explicitly to a bizonal, bicommunal solution in Cyprus, was not an impediment to the parties presenting the positions they will present.

“There are these changes in the administration of northern Cyprus. It is important that there is a chance for all the people to frankly discuss among themselves how they see the future and to see how to move forward,” he said.

The Turkish side has been calling for a change to the solution framework, arguing that talks on a federal solution led nowhere.

“Obviously, this is not an impediment for the parties to present the positions they will present. I am always ready to go to the SC and if there is an agreement of the parties enlarging the scope of the negotiations, to be interpreted as a common agreement in this regard,” he added.

He pointed out that the first step is to bring the parties together; to listen to them, to see the result of that discussion.

Guterres said the fact that he sticks to the mandate he received does not mean he was not open to listen to everybody, “to take the conclusions of that discussion based on whatever the parties come to a common view about the future.”