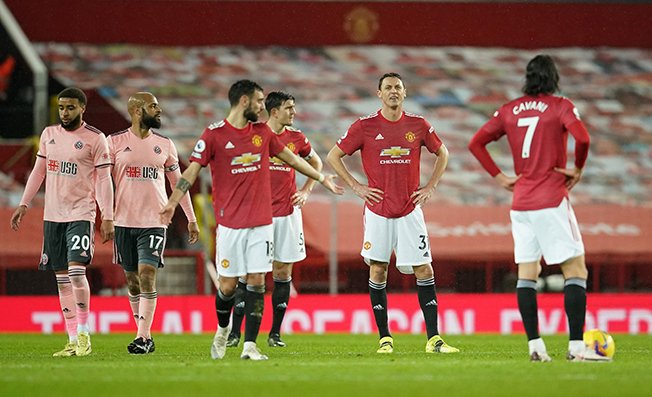 United's shock 2-1 home defeat by Sheffield United not only stopped Ole Gunnar Solskjaer's team returning to the top of the table, it also snapped a 13-game unbeaten league run

Just when Manchester United’s fans were beginning to dream of a first Premier League title since 2013 along came bottom club Sheffield United to offer a reality check.

United’s shock 2-1 home defeat by Chris Wilder’s side not only stopped Ole Gunnar Solskjaer’s team returning to the top of the table, it also snapped a 13-game unbeaten league run.

So Saturday’s trip to a rejuvenated Arsenal has suddenly assumed greater significance, with Manchester City now above their second-placed city rivals by a point with a game in hand.

Was the Sheffield debacle a blip or was it evidence that the early-season gremlins that had placed Solskjaer under such pressure in November are still lurking at Old Trafford.

Victory at the Gunners, who United lost to at home on Nov. 1 before embarking on 10 wins and three draws, would go a long way to proving that the former is the more likely.

“When you get kicked down, it’s how quickly you bounce back and Saturday’s a big one and we’ve got to get three points,” skipper Harry Maguire said after the defeat by Sheffield United.

“We are disappointed, it hurts, but we’ve got to pick ourselves up and bounce back.”

Arsenal will be relishing the visiting of United.

Mikel Arteta’s side may still be down in ninth place but they are the form team in the division with five wins and a draw from their last six league games.

Like Solskjaer, Arteta was coming under fire with Arsenal plunging towards the relegation zone but they have suddenly clicked and have scored 10 goals in their last four games while conceding one — in a fine 3-1 win at Southampton on Tuesday.

Victory would even revive talk of a top-four challenge by the London club but Arteta is refusing to get carried away.

“We know it’s going to be really difficult against United,” he said on Thursday. “They’ve been in top form. They’ve been top of the table, playing really well.

“We know they are a real threat so we have to be at our best to beat them on Saturday.”

By the time Arsenal and United kick off, Manchester City may have already opened up a four-point lead over their neighbours by knocking Sheffield United back down to earth.

City have begun to look ominously good with seven successive league wins and 11 in all competitions.

They will again be without the injured Kevin De Bruyne, but they certainly did not miss him when thumping West Bromwich Albion 5-0 away on Tuesday, with Ilkay Gundogan scoring twice.

Manager Pep Guardiola knows that the Premier League, especially this season, is wildly unpredictable and there is no way his side will be taking the Blades lightly.

“This is the Premier League. It is so tough. Every game is so complicated,” the Spaniard said. “It is important we have a good run and realise why we are here and go to the next one.”

Third-placed Leicester City, who appear capable of challenging the Manchester clubs, host Leeds United on Sunday, while West Ham United, who moved into the top four with a win at Crystal Palace this week, host champions Liverpool on Sunday.

New Chelsea manager Thomas Tuchel will have had a few more training sessions under his belt ahead of his side’s Sunday test against a resurgent Burnley side at Stamford Bridge.

After Chelsea were held to a dreary 0-0 draw at home to Wolverhampton Wanderers on Wednesday in his first game in charge, the German will be keen to see an attacking threat.

Out of quarantine and into action for Australian Open players