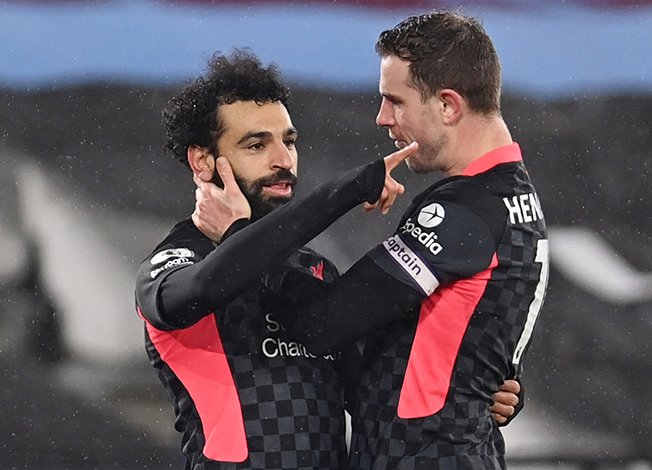 Liverpool came to life after a first half almost devoid of goalmouth action at the London Stadium, with Salah providing two superb finishes to claim the points for his side.

The Egyptian cut in to curl home with his left foot in the 57th minute — his first league goal since Dec. 19 — and doubled the lead with a silky finish from a 68th-minute counter-attack.

Substitute Roberto Firmino set up Gini Wijnaldum to tap home Liverpool’s third in the 84th minute before Craig Dawson replied for the hosts with a consolation goal three minutes later.

Bamford shines as Leeds come from behind to beat Leicester
Patrick Bamford scored one and created two goals as Leeds United ended Leicester City’s seven-match unbeaten run and denied Brendan Rodgers’ side a move up to second in the Premier League with an entertaining 3-1 victory on Sunday.

Leeds remain in 12th, behind Southampton on goal difference, while Leicester are third — two points behind Manchester United who were held to a goalless draw at Arsenal on Saturday.

The home side opened the scoring in the 13th minute when Harvey Barnes charged through the midfield and exchanged passes with James Maddison before finding the bottom corner.

But their lead lasted only two minutes when Bamford spotted Stuart Dallas making a run into the box and slipped a ball through the defence for the midfielder to score the equaliser with a goal identical to Barnes’ opener.

Leeds took the lead with 20 minutes to go when Raphinha’s first-time through ball gave Bamford space to shoot and the English striker’s left-footed strike found the top corner for his 11th goal of the season.

With Leicester forced to pour men forward in search of an equaliser, Leeds scored a third from a counter-attack as Bamford sprinted into space before unselfishly squaring the ball for Jack Harrison to fire into an empty net.

Chelsea secure first win under Tuchel
Chelsea notched up their first win under Thomas Tuchel on Sunday with a 2-0 victory over Burnley thanks to goals by Spanish defenders Cesar Azpilicueta and Marcos Alonso who have both been given a chance to shine under the German coach.

Azpilicueta, restored to Chelsea’s starting line up by Tuchel in his two games since replacing Frank Lampard, scored with an angled shot in the 40th minute after sprinting 80 yards to be fed by winger Callum Hudson-Odoi.

Alonso, playing in the league for the first time since September, secured the win in the 84th minute when he controlled a pass from Christian Pulisic with his chest and knee before swivelling to hit a shot past Burnley goalkeeper Nick Pope.

Hudson-Odoi, another who has featured prominently under Chelsea’s new German manager, and fellow Chelsea academy product Mason Mount were at the heart the Blues’ best moves as they tried to turn their dominance of possession into more goals.

The youngsters’ form contrasts with the struggles of the club’s two expensive German signings Timo Werner and Kai Havertz who pose Tuchel’s most immediate challenge. Werner wasted a good early chance for Chelsea while Havertz was dropped to the bench and only came on for the last 10 minutes.

The win pushed Chelsea – who drew 0-0 last week against Wolves in Tuchel’s first game – up to seventh in the Premier League standings, 11 points behind leaders Manchester City. Burnley slipped to 16th place.

Trossard converted from close range from Pascal Gross’s pull back in the 17th minute as Brighton dominated the first half against a desperately disappointing Spurs side.

Brighton hung on tenaciously to secure a win that opened up a seven-point gap between them and the relegation zone.

Out-of-form Tottenham’s second defeat of the week leaves them in sixth place, six points off the top four.