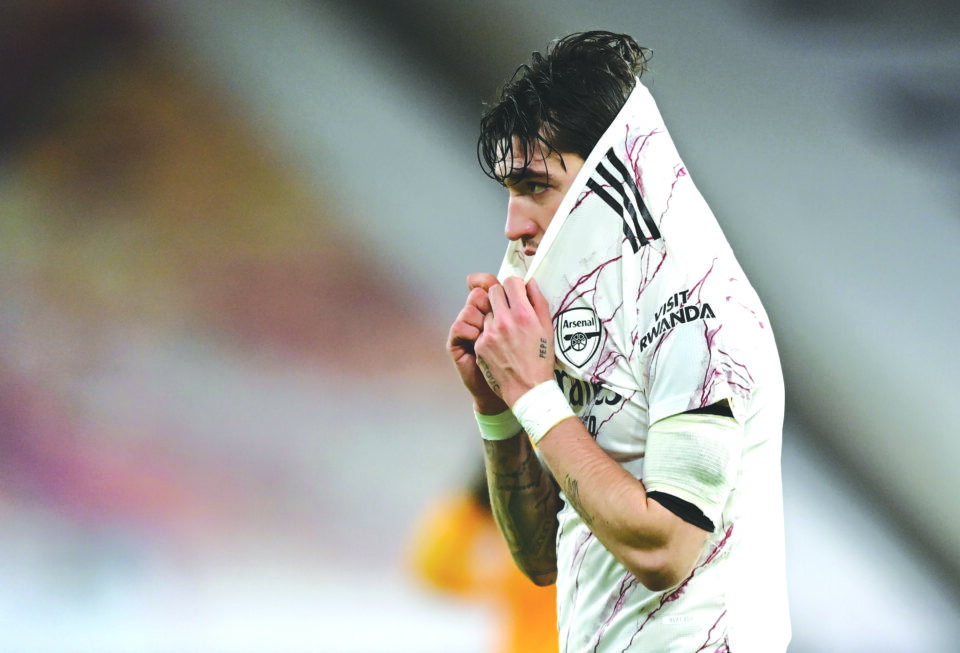 Arsenal finished with nine men as their impressive recent Premier League resurgence was halted by a 2-1 defeat to Wolverhampton Wanderers at a rain-swept Molineux on Tuesday.

Joao Moutinho’s stunning long-range effort shortly after the break ended an eight-game run without a league win for Wolves.

Arsenal, however, have only themselves to blame for surrendering an unbeaten league run which had stretched to seven games.

The Londoners should have led by more than Nicolas Pepe’s superb 32nd-minute goal as they completely outplayed Wolves in the first half before everything changed in an instant.

Seconds before the interval Arsenal defender David Luiz was sent off for inadvertently bringing down Wolves striker Willian Jose and Ruben Neves converted the penalty.

Four minutes into the second half Moutinho’s piledriver flew past Arsenal keeper Bernd Leno and Arsenal’s night went from bad to worse as Leno was later red-carded for rashly handling the ball outside his area.

It meant Arsenal played the last 20 minutes down to nine men and they rarely looked like troubling a Wolves side who could hardly believe their good fortune as they claimed a first league double over Arsenal for 42 years.

Defeat left Mikel Arteta’s Arsenal side in 10th spot with 31 points from 22 games, five points ahead of Wolves in 13th.

When Arsenal started the game by carving through the Wolves defence at will the final score looked improbable.

Bukayo Saka could have had a hat-trick in the opening 10 minutes. In the first two minutes he hit the post after being played in by Thomas Partey’s pass, then he forced a fine save from Rui Patricio with a sharp shot on the turn.

Saka did beat Patricio with a brilliant finish in the 10th minute after Alexandre Lacazette’s cut back but Lacazette was correctly ruled offside after a VAR check.

Wolves had their moments with Max Kilman heading over from a corner but it was no surprise when Arsenal went in front.

Receiving the ball out on the left, Pepe went through two flimsy tackles and then arrowed an angled drive beyond Patricio.

Wolves would have been happy to reach the interval only one goal in arrears but they got a massive helping hand.

In a rare Wolves attack Daniel Podence slipped a well-timed pass to Jose, making his home debut, and he looked poised to score before Luiz, trailing behind him, accidentally clipped his heel, sending the striker tumbling to the deck.

After the slightly unfortunate Luiz trudged off, Neves sent his penalty high past Leno.

Arsenal sacrificed Lacazette at halftime, bringing on defender Gabriel, but they were stunned in the 49th minute when veteran Moutinho looked up 30 metres from goal and sent a right-foot drive into the back of the net off the post.

The visitors already faced a tough task even before Leno inexplicably used his hands to clear the ball after dashing out of his goal to intercept a long pass. After that it was mission impossible.