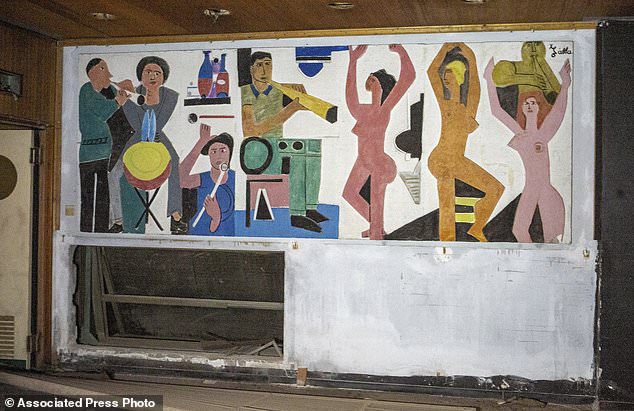 Painting by Christoforos Savva on the wall of the Perroquet nightclub (Eleni Papadopoullou: Politis)

Concerns over what are now valuable Cypriot artworks that lay locked away within a former nightclub in Varosha have surfaced after the city’s controversial partial reopening last year.

The abstract figures dancing to and playing music on the walls of the Perroquet nightclub in the Esperia Tower hotel have lain dormant since the city was abandoned during the invasion in 1974.

Almost half a century later, the rare works by Christoforos Savva – the then newly independent Republic’s modern artist – are caught in a tangle between north and south.

“It’s very important that they are returned, Savva was one of the artists who introduced a new school of art and was a fantastic artist whose works are very rare,” co-president of the Bicommunal Technical Committee on Culture Androulla Vassiliou told the Cyprus Mail on Monday.

“Not many of his earlier works are available and he died at a very young age, so these works have to be preserved.”

The first obstacle is for the works to be returned to the south, which may prove to be tricky.

As Vassiliou explained, hundreds of artworks have been exchanged between north and south with the help of the committee – most recently in 2019, when 219 pieces from Varosha made their way to the Republic, including some of Savvas’ pieces.

Vassiliou hopes Savvas’ works may be a possible subject of confidence-building measure to be raised among future meetings between President Nicos Anastasiades and Turkish Cypriot leader Ersin Tatar.

But her “excellent” Turkish Cypriot counterparts resigned in October, following Tatar’s election in the north – rendering the committee paralysed.

A further complication has also arisen: who actually owns the artworks?

Former manager of the nightclub and the man who commissioned the artwork Avgerinos Nikitas has appealed to the technical committee for their help – saying: “In return, I pledge to cede these pieces to the National Collection as a small contribution to Christoforos Savva´s huge body of work,” Nikitas said in a letter.

But the 93-year-old’s attempts to liberate the artworks from their dark depths would face legal challenges from the Esperia Tower’s owners, the building in which Perroquet was located.

The owners of the building claim the artworks are theirs, along with everything else in the hotel.

“The hotel and everything inside belong to our family, claims otherwise must be made legally,” Panayiotis Constantinou, whose family owns the Esperia Tower, told the Cyprus Mail on Monday.

“It was my father who owned the hotel and now it has passed on to us, there is no justification for other claims,” Constantinou said.

Asked how he feels about the artworks being removed from the hotel, Constantinou said he would prefer them to remain, but further discussions need to be had with the rest of the family.

Savva is arguably one of the most important Cypriot artists, who helped transform the creative culture on the island, and his works in Varosha have an added historical value: capturing the spirit of the town as it was in the 1960s.

The world-famous resort town hosted celebrities such as Raquel Welch, Elizabeth Taylor and even four Swedes – who later formed Abba – played their first concert in a Varosha hotel.

The rapid modernisation and the tourist attention on Varosha brought with it the music and trends of the time, which Savvas’ naked dancing figures adorning the walls of the nightclub alluded to – but shocked others.

“I understand that he made those works on the wall of the [nightclub] for a sandwich a day or something similar, he was so poor – so we have to save them and there is a way to save them,” Vassiliou said.

Our View: PEPs list uninformative but a step in the right direction