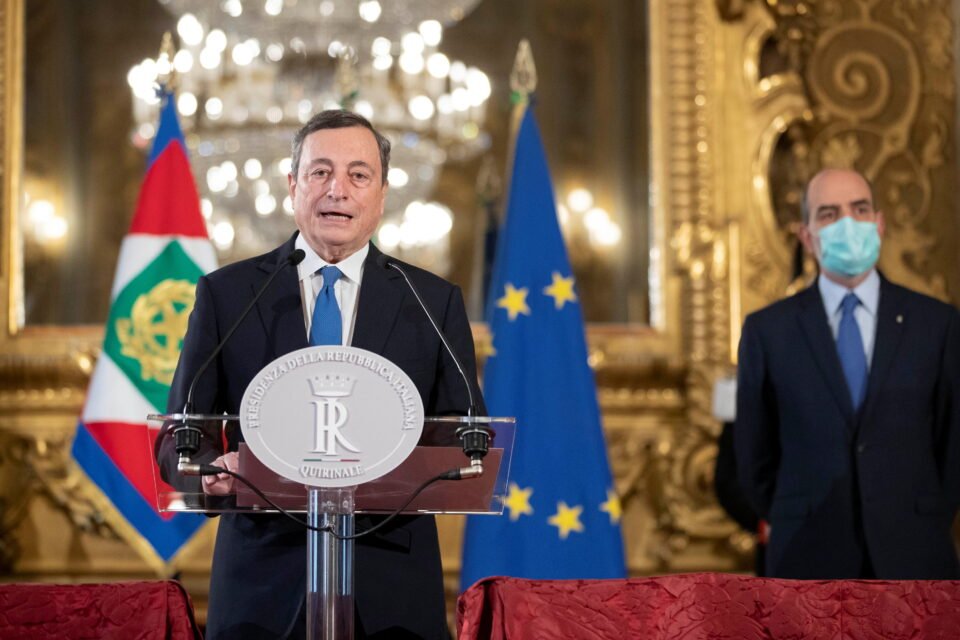 Draghi, widely credited with saving the eurozone from collapse in 2012, accepted the mandate, saying he was confident he could find backing in Italy‘s fractured parliament for a new administration.

“This is a difficult time,” Draghi said. “Beating the pandemic, completing the vaccination campaign, offering answers to the everyday problems of the people and relaunching the country are the challenges we face.”

The president warned that a new government had to take office immediately to prevent Italy from missing out on more than €200bn from a European Union fund designed to help overcome the economic slump.

Draghi said Italy must seize the moment: “We have extraordinary European Union resources at our disposal, we have the opportunity to do so much for our country.”

Investors applauded his appointment. Italy‘s borrowing costs were heading for their biggest daily fall since June while the Milan bourse blue chip index rose 2.5 per cent.

However, there was no guarantee that the highly respected economist would be able to muster sufficient support, with the largest party in parliament, the anti-establishment 5-Star Movement, immediately ruling out its backing.

Draghi whose illustrious career has earned him the nickname ‘Super Mario’, was famous for pledging to do “whatever it takes” to save the single European currency during his time at the ECB.

He had largely vanished from the public eye since his ECB term ended in October 2019, but he emerged as a potential premier in recent weeks as political turmoil combined with the health and economic emergencies to form a perfect storm.

The first European country to be hit by the coronavirus, Italy has seen more than 89,000 deaths since its outbreak almost a year ago – the sixth-highest toll in the world.

Lockdowns aimed at curbing the contagion have devastated the economy and data released on Tuesday showed that Italy‘s gross domestic product shrank by 8.8 per cent in 2020 – its steepest annual drop since World War Two.

The first challenge facing Draghi will be parliament, and unusually Mattarella gave him no time limit for finding a workable majority, a source in the president’s office said.

The 5-Star, which has formed the backbone of Italy‘s last two coalition governments, has repeatedly railed against the concept of technocrat governments and would likely face a grass-roots revolt if it backed the veteran central banker.

“The 5-Star would only have supported a government led by Giuseppe Conte,” said Riccardo Fraccaro, a party bigwig and government undersecretary.

If the 5-Star remains on the sidelines, all eyes will be on the next two largest parties – the centre-left Democratic Party (PD) and far-right League – who are sworn political enemies but might have to vote together to give Draghi a chance.

One League source said the party would offer its support if it got a commitment from Draghi to hold elections within a year.

The PD was largely supportive of Mattarella’s move, but did not offer unconditional backing. “The Democratic Party will have to think about what to do in relation to what others are doing,” said its deputy leader, Andrea Orlando.

A Draghi government would reinforce Italy‘s international standing at a time when it has the presidency of the G20. But taking the job would carry risks for him.

The last time a technocrat took charge was in 2011, when another economist, Mario Monti, was entrusted with helping Italy out of a debt crisis. Parliamentarians soon turned on him when they deemed that his economic medicine was too pungent.

Coronavirus: High risk groups should not be given AstraZeneca expert says

Experts wary of calling time on Omicron wave in Europe

Some restaurants rebel, reopen ahead of Dutch lockdown easing