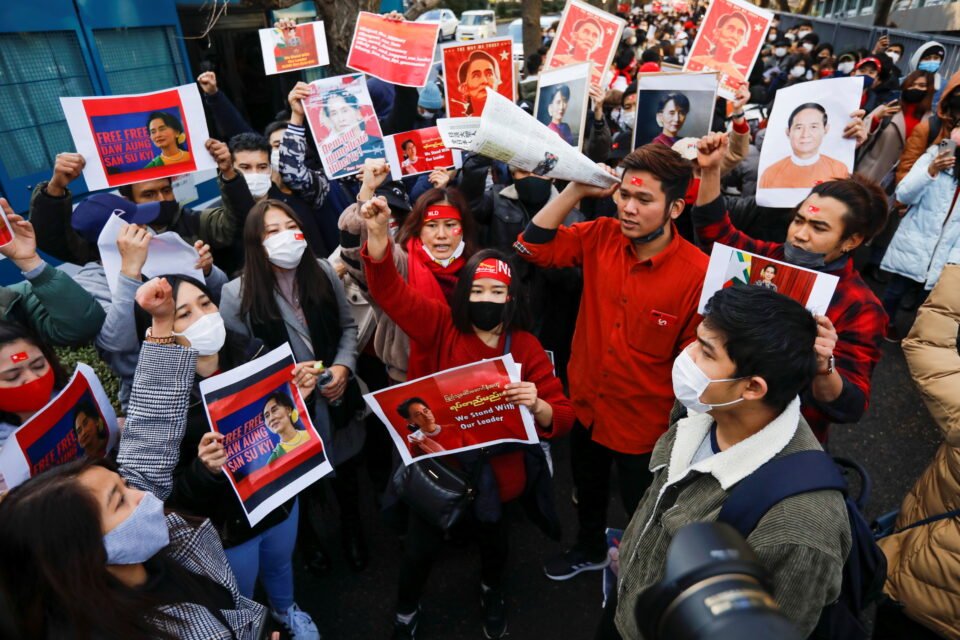 Protesters from Myanmar residing in Japan

The Group of Seven largest developed economies on Wednesday condemned the military coup in Myanmar and said it was deeply concerned about the fate of detained political leaders such as Aung San Suu Kyi.

“We, the G7 Foreign Ministers of Canada, France, Germany, Italy, Japan, the United Kingdom and the United States of America and the High Representative of the European Union, are united in condemning the coup in Myanmar,” they said in a statement.

“We are deeply concerned by the detention of political leaders and civil society activists, including State Counsellor Aung San Suu Kyi and President Win Myint, and targeting of the media.”

The G7 foreign ministers called on the military to end the state of emergency and allow unrestricted humanitarian access to support the most vulnerable.

“We call upon the military to immediately end the state of emergency, restore power to the democratically-elected government, to release all those unjustly detained and to respect human rights and the rule of law,” the G7 said.

“The November election results must be respected and Parliament should be convened at the earliest opportunity.”

A statement from the group said the army had put its own interests above a vulnerable population facing hardships during the coronavirus pandemic. The virus has killed more than 3,100 people in Myanmar, one of the highest tolls in Southeast Asia.

“We refuse to obey any order from the illegitimate military regime who demonstrated they do not have any regards for our poor patients,” said a statement from the protest group.

Four doctors confirmed they had stopped work, but did not want to be identified.

“I want the soldiers to go back to their dorms and that’s why we doctors are not going to hospitals,” one 29-year-old doctor in Yangon told Reuters. “I don’t have a time frame for how long I will keep on this strike. It depends on the situation.”

Reuters was unable to reach the government for comment on the doctors’ action.

The army seized power on Monday, cutting short an unsteady transition to democracy on the grounds of fraud in last November’s general election, which Suu Kyi’s National League for Democracy (NLD) won in a landslide.

The coup drew condemnation from the United States and other Western countries as the ruling generals detained Suu Kyi and dozens of other officials.

Consolditating its hold, the junta unveiled a new governing council including eight generals and headed by army chief General Min Aung Hlaing. It resembled the ruling appartus under previous juntas that had ruled Myanmar for nearly half a century until 2011.

Nobel Peace laureate Suu Kyi, 75, remains in detention despite international calls for her immediate release. An NLD official said he had learned she was under house arrest in the capital Naypyidaw and was in good health.

In the biggest public protest against the coup so far, people in the commercial hub of Yangon chanted “evil be gone” and banged on metal pots late on Tuesday in a traditional gesture to drive away evil or bad karma.

The latest coup is a massive blow to hopes the impoverished country of 54 million people was on the path to stable democracy.

At the United Nations, the world body’s Myanmar envoy Christine Schraner Burgener urged the Security Council to “collectively send a clear signal in support of democracy in Myanmar“.

The council is negotiating a possible statement that would condemn the coup, call for the military to respect the rule of law and human rights, and immediately release those unlawfully detained, diplomats said. Consensus is needed in the 15-member council for such statements.

But a diplomat with China’s U.N. mission said it would be difficult to reach consensus on the draft statement and that any action should avoid “escalating the tension or further complicating the situation.”

U.S. President Joe Biden has threatened to reimpose sanctions on the generals who seized power.

U.S. Army General Mark Milley, chairman of the Joint Chiefs of Staff, tried but was unable to connect to Myanmar‘s military following the coup.

The Biden administration had determined the power-grab constituted a coup d’etat, triggering restrictions in foreign assistance. Humanitarian aid, including to the stateless Rohingya Muslim minority, and programmes that promote democracy or benefit civil society would continue.

The International Monetary Fund said it had little hope of recovering $350 million in cash it to the Myanmar government days before the coup, part of a no-strings-attached emergency aid package to help the country battle the coronavirus pandemic.

Suu Kyi endured about 15 years of house arrest between 1989 and 2010 as she led the country’s democracy movement.

The military had ruled from 1962 until her party came to power in 2015 under a constitution that guarantees the generals a major role in government.

Her international standing as a human rights icon was badly damaged over the expulsion of hundreds of thousands of Rohingya Muslims in 2017 and her defence of the military against accusations of genocide.

U.N. diplomats say they are concerned for the future of the Rohingya minority still in Myanmar as well as hundreds of thousands of refugees in neighbouring Bangladesh.

“If we go back now, there is no security for our lives and property. We need help from the U.N. We can’t go back alone,” said Rohingya refugee Absarul Zaman at a camp in Bangladesh.