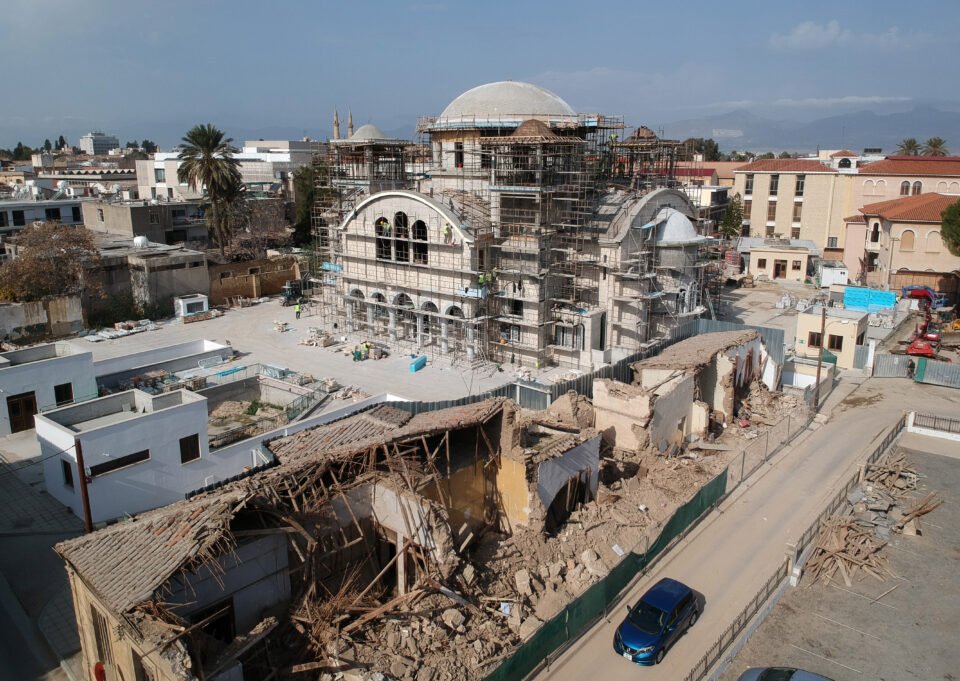 The destroyed listed houses in old Nicosia this week

THE ILLEGAL and arbitrary demolition of the listed buildings in Nicosia’s old city on the instructions of the archbishopric, illustrates once more that the Church does not just control religion, but also the law, politics, ethics, the arts and education. Sadly, this demolition is only one example of the excessiveness of the archbishop and other senior clerics who show total contempt for the laws of the Cyprus Republic, when promoting their financial interests and pushing democracy even closer to its collapse.

What is so astonishing, and merits sociological research, is the fear and terror which grip ministers, deputies, mayors, top bankers and institutions when faced with an illegality by a senior cleric, especially by the archbishop who poses as the superman of morality and high priest of the developers. Terrorised, they all submit to the arbitrariness and willfulness of the church hierarchy, rendering them a state within a state and thus eliminating equality before the law, which is the cornerstone of democracy. This tendency permanently and irreversibly dashes the dreams of thinking people who seek a secular state and the full democratisation of our country.

The tortuous path of the cheque for €300,000 given by the international crook Jho Low, with the archbishopric as its beneficiary, outlines the lawlessness prevailing in Cyprus as a consequence of the state within a state. Archbishop Chrysostomos demanded Low be granted citizenship because the church stood to gain from it and the minister had no choice but to obey. The archbishop’s voice has always been considered His Master’s Voice. It is a command. And his command will be cashed through a cheque. The talk of “a donation to the Theological School” sounds like a bit of a joke. By what reasoning would a Muslim donate such a large amount of money to a Christian theological school? Have you perhaps heard of any Christian supporting financially the establishment or operation of Islamic holy schools known as madrassas?

In any case, the cheque, which was from a Bank of Cyprus account and had the archbishopric as its beneficiary, did not followed the routine procedure because the archbishop was involved rather than Mr Kostis. According to the rules of the European Central Bank, commercial banks are obliged to follow the KYC (Know Your Customer) policy and if there is any suspicion of the possibility of money-laundering or the money resulting from criminal activity (especially in relation to cheques for large amounts of money) the bank has a responsibility to submit a SAR (suspicious activity report) to Mokas (the financial crimes office). Mokas is the state authority with the power to investigate suspicious money transactions or transfers. For such a large amount the Bank of Cyprus should have submitted a SAR regarding the €300,000 sheque, but turned a blind eye to it. Equality before the law was suspended yet again.

There is also another aspect to the issue of the pay-off also known as the “donation to the Theological School”. Miranda Kerr is an Australian actress, who is an atheist and at one point had a relationship with the Malaysian crook Low. In 2017, after the revelation of the fraud perpetrated by Low, Kerr, who is a permanent resident of the US, handed over to the American police diamonds and other jewellery worth millions of dollars, with the request that these were  passed on to the Malaysian police. In contrast to the archbishop, she did not wait for the government of Malaysia to demand the return of the diamonds. Chrysostomos, knowing that the money in the church’s possession was stolen, still refuses to return it unless the government of Malaysia demands it. Surely he is aware that legally this would be very difficult to do since Low, who has disappeared from the face of the earth, has not been tried or sentenced by any court. Our attorney-general pretends he knows nothing out of fear. And one more point relating to morality: the conclusion that can be arrived at from this story is that the moral code of an atheist is, by comparison to that of the archbishop, much closer to the Christian moral code.

If some hope has come out of the demolitions’ incident is related to the storm of protest that it sparked. Almost all the parties condemned the archbishop’s action. He has been forced to bow to the pressure and announce that he will restore the destroyed listed buildings. But nobody should be overly optimistic, as long as the education ministry is controlled by whoever is archbishop; as long as the education minister as rule is from the far-right; as long as proselytisation exists in education; as long as critical thought is not cultivated in schools; as long as priests are invited to bless football teams at the beginning of the new season; as long as our politicians, with their tongues hanging out, chase after the bishops. And as long as the archbishop is incapable of admitting making a mistake and asking forgiveness, nothing will change.

A minute with Ioanna Kanari Papadopoulou Graphic artist and illustrator