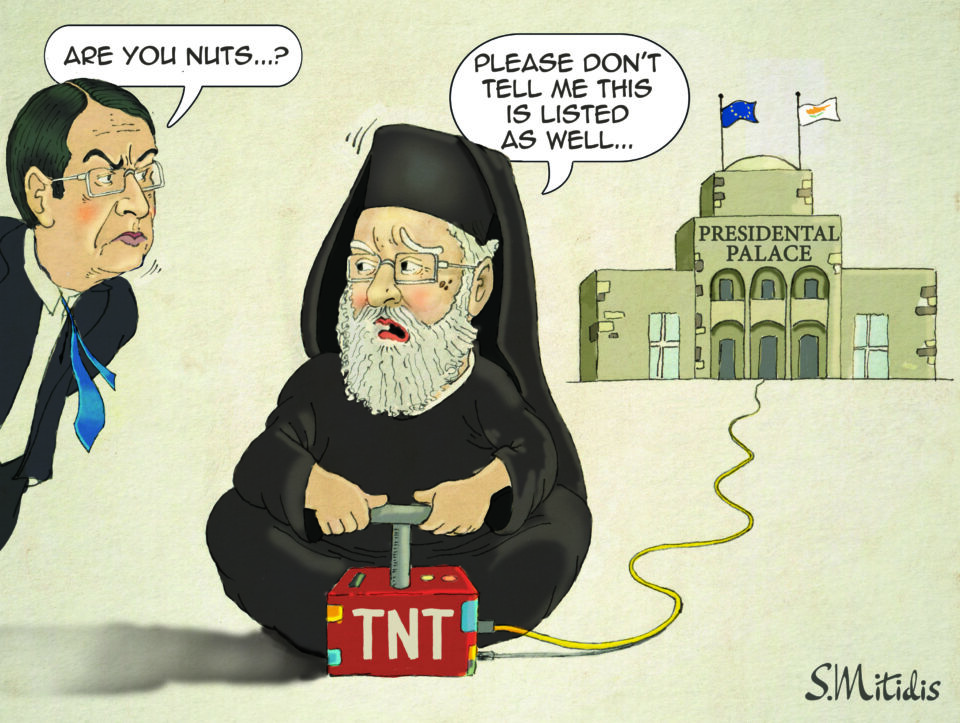 PREZ Nik had his big day in front of the investigative committee on Tuesday, pleading ignorance to questions that he did not want to answer.

He did, however, remember that in 2018 he flew his family on the private Boeing belonging to his Saudi buddy, free of charge. He told the committee that there was no quid pro quo, the Saudi sheik picking up the bill as a gesture and not as a gift. The committee did not ask him to explain the difference between a gesture and gift or the danger that what he considered a gesture, his friend might have considered a gift.

A gesture might involve picking up the bill at a restaurant or a bar but flying someone’s extended family on a private jet to the Seychelles and back seems quite a long way away from what ordinary people would consider a gesture. This simple gesture of generosity may have cost the sheikh 50 or 60 grand and obviously Nik has never heard the saying that ‘there is no such thing as a free lunch.’

THE SEYCHELLES trip saga did not end there. There had been another family trip to the Seychelles in August 2015, aboard the same sheikh’s jet, but that time Nik claimed to have paid. Was he charged €10, as a gesture, so that nobody could accuse him of receiving a gift?

In January of the same year, the sheikh, three siblings and another three individuals were granted citizenships, while a few days after the Seychelles trip the sheikh’s second wife was granted citizenship, even though this was a violation of Cyprus law which does not recognise polygamy. This point was made in an earlier investigation, carried out by Demetra Kalogirou who also sits on the Nikolatos investigative committee. Perhaps the Cyprus passport was granted to the second wife as a gesture, given she did not satisfy the criteria.

ON THURSDAY, some House committee, supposedly investigating the Seychelles trip had invited the director of the president’s office and the secretary of the council of ministers and asked them if Nik was on the sheikh’s Boeing that left Larnaca on August 3, 2015 and returned on August 13. For unknown reasons they refused to answer, asking that the questions be put in writing and sent to the presidential palace for an answer. Why did they not answer, considering their boss had told the investigative committee, two days earlier, that he had gone to the Seychelles on the sheikh’s jet in August 2015 and paid out of his own pocket? And if they needed confirmation, they could have consulted the official gazette of August 2015 which reported that Yiannakis Omirou, then House president, would be acting president of the republic.

I TAKE this opportunity to engage in a little bragging and self-glorification. On August 9, 2015, our establishment, in response to questions about where Nik had gone on holiday to reported the following: “We can reveal, with a note of caution that Nik has gone on holiday to the Seychelles taking with him his entire family – daughters, sons-in-law and grandkids. The presidential family’s host is according to our information a mega-wealthy Arab, who might also be a sheikh. This explains why the holiday was a carefully-guarded secret.” Nothing was written about the private jet at the time, but perhaps when the House committee sends its list of questions to the presidential palace, it could ask where the first family had stayed while in the Seychelles.

I SEE that Akel deputy Irini Charalambidou was not impressed that Prez Nik decided to answer on the behalf of his justice minister Emily Yiolitis, at the news conference presenting the anti-corruption measures, 10 days ago. The old battle-axe Irini engaged in a moralistic tirade accusing Yioliti of “needing a man, and in fact the president, to ‘save’ her.”

The tough feminist added: “And when someone seeks public posts, he must be prepared to cope with and face a lot. Much more so a minister of justice. If he does not have the mettle then he stays at home.” Why Irini used the masculine pronoun when she was referring to a woman is beyond me. She finished with a P.S. “If I was in Mrs Yiolitis position I would have submitted my resignation. If a president does not consider me capable to give an answer, how could I serve the justice ministry?”

This is bit rich from Irini. If my memory serves me well, while at some meeting in the presence of her party boss, she was about to start talking, but comrade Andros signalled her to stay quiet and she dutifully obeyed. She did not consider it necessary to resign even though her party leader did not consider her capable of giving an opinion.

A REGULAR of our establishment wrote to correct me about what I had written last week about only Cyprus and Greece having curfews in force. In fact, I was informed, curfews are in force in 17 of the 27 EU member-states. That leaves 10 without a curfew and only one of these, Finland, having a lower mortality rate than Cyprus, which has seen its epidemiological situation improve significantly.

But despite this improvement, acknowledged by generalissimo, Constantinos Ioannou, and the reopening of the retail sector including malls, the fascistic SMS system remains in place. Is this an example of the state taking away our liberties and refusing to give them back? And incidentally, it is only Greece and Kyproulla that have this police state measure in force that in our case is indefensible and totally unjustified. I urge people to disobey and fight against this undemocratic measure. I say this, at the risk of the junta deciding to punish me by not authorising any of my requests to leave my house.

A FEW DAYS ago, I went to my hairdresser on Ledra Street for a cut and as I was having my hair washed two plainclothes cops entered. They approached a woman who was having her hair dyed and demanded to see the SMS on her phone authorising her to go to the hairdresser.

The woman was in a hairdresser’s because the police state had decreed they could open and take customers. Was there any justification for the cops to come into the hairdresser’s to inspect whether she had state permission to be there? She was not putting anyone at risk, she was wearing her face mask and she was four metres away from me, the only other customer.

What is really worrying is that the cops are taking their role as officers of the police state very seriously.

FOREIGN Minister Nikos Christodoulides is continuing his devious efforts to take over all other ministries. On Tuesday he was asked what was happening with the economic diplomacy he said he would launch. His response was perfectly in keeping with his talent for hot air. He said:

“The draft of the strategy, as has been forwarded by the international experts has been passed on to all the representatives of the Cypriot ecosystem and we await their comments so we can start its specific implementation from March 1t, 2021. The findings of the strategy as well as the suggestions of the experts as to how we can move as the Cyprus Republic, in what sectors, in which countries, taking into account the capabilities of our country, are very significant. The strategy highlights those sectors in which the Cyprus Republic is considered to have comparative advantages and can attract foreign investments, either these relate to technology, tourism, health….”

Having achieved the strategic objective of making us a regional power of geo-strategic significance through his political diplomacy, the Paphite, through his economic diplomacy, is going to make us the country everyone wants to invest in. Do the representatives of our ecosystem include birds and trees?

The Cyprob should end how it began, with the constitution

Our View: President keeps digging himself into a deeper hole