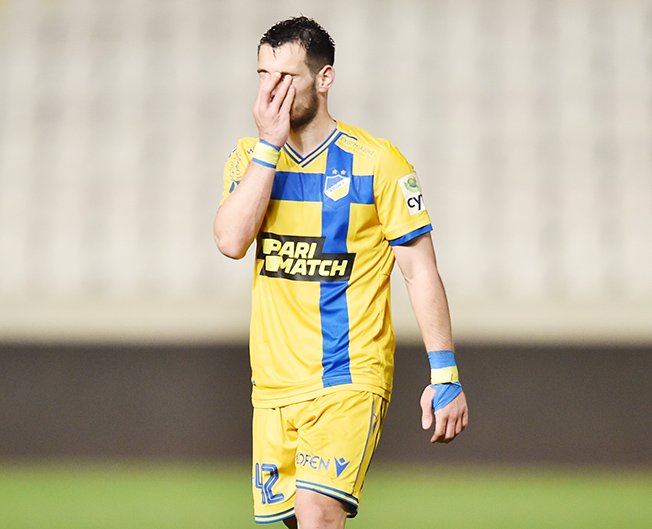 You would have to go back to the 2004-2005 season to find something similar to what is happening this season with Apoel’s flirtation with the threat of relegation.

During that eventful season, not one, but two of the traditionally big clubs of Cypriot football came close to being relegated.

Apollon had to call on the experience of veteran attacking midfielder Kostas Malekkos and the tactical nous of German manager Bernd Stange to survive the drop, with a late rally of good form propelling the club to a seventh place finish, while fellow Limassol club AEL barely managed to stay up, finishing in tenth place, just two points off the drop zone.

AEL were in danger of being relegated in the 2007-2008 season as well, scraping together a miraculous survival in the last game of the season, when a 3-2 win over Aris left both clubs on equal points, with AEL finishing one spot above the relegation zone due to their better record in comparison with Aris.

This season, after Apoel’s shocking 3-2 home defeat at the hands of then bottom-placed Ethnikos Achnas on Sunday, the Nicosia club find themselves in tenth place on equal points with Enosis who are just one spot below them.

With four teams going down this season, following the post-regular season playoff phase, avoiding relegation has suddenly become the highest priority for Apoel.

Despite an uptick in form under new manager Savvas Poursaitidis and no less than four new players arriving in January, Apoel have still managed to win a paltry one point over the past four games, a wretched return despite having to face three of the current top four in three of those games.

“We were unlucky and it’s embarrassing. We started the game well but after the goal it was like switching off our engines both on and off the ball”, the Norwegian explained.

“We conceded two easy goals which made us stressed. We started attempting long balls and they hit us on the counter”, Lundemo added.

Poursaitidis bemoaned his side’s difficulty in scoring and the ease with which they concede.

“We struggle to score, to create, we hit the post and the goalkeeper from close range. Conversely, we concede from long range and set-piece situations”, Poursaitidis said, referring to Ethnikos’ first and third goals, and the myriad of chances his side wasted during the second half.

“I am disappointed and embarrassed but this changes nothing. We have to win our next game. We have lost three consecutive games which is unprecedented and it must stop”, the Apoel manager added.

Apoel have three regular season matches left before the league splits into two mini-leagues to determine the champions and the sides which will be relegated.

First comes a game against Olympiakos away from home, then they will host Salamina, followed by a tremendously important game in round 26 against fierce rivals and title contenders Omonia.

The Greens are salivating at the prospect of sinking Apoel further down the table while simultaneously making a claim for a title win.

Ominously, the underlying numbers don’t bode well for Apoel. Despite having conceded 24 goals before their game against Ethnikos, that figure was still lower than their expected goals against (xGA) figure of 28.73.

There is a shrivel of optimism in their attacking potential, however. Apoel have massively underperformed in terms of expected goals this season, scoring 21 goals against an expected goals figure of 28.58 before their loss to Ethnikos. A better conversion rate may be the answer to Savvas Poursaitidis and Apoel’s woes.