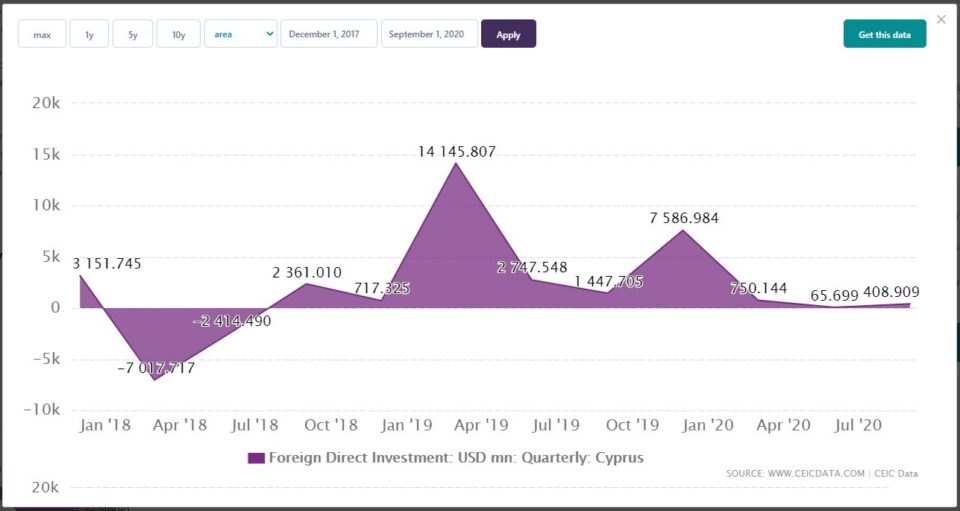 Inflows of Foreign Direct Investment (FDI) in Cyprus during the first three quarters of 2020 were down a staggering 96 per cent compared with the same period in 2019, according to statistics from the ministry of finance.

What’s more, expectations for 2021 are shrouded in uncertainty, the ministry said in a note.

“It is emphasised that ongoing major investment projects in Cyprus have not halted, but they continue with some delays, along with any new projects.

It is worth noting that the ending of the citizenship scheme has not had a major effect on foreign direct investment.

“At the current juncture, we do not have any estimates on how much the cancellation of the CIP has affected FDI.  But, given the fact that the CIP has been stopped at the end of October 2020, we do not expect a significant impact on FDI in that year.”

For 2021, the cessation of the programme is expected to have some impact, the ministry points out. “The impact of the cancellation of the CIP on GDP projected to be around 0.4 p.p. of GDP.”

In total over the first three quarters, Cyprus benefitted from a net foreign direct investment inflow of €411.4 million, down from €12.941 billion across the same period in 2019.

While the figures are stark, it might be important to consider that 2019 was one of Europe’s best years for FDI, so comparisons may be harsh. Inflows into Cyprus constituted 29 per cent of GDP, and the general flow of investments across Europe was strong, with 6,441 projects planned across 47 countries.

The overall outlook for the economy could be worse yet, as foreign direct investment does not factor real estate purchases by foreigners. If, however, a foreign company enters into an agreement to carry out construction in Cyprus, this would constitute FDI. Hence, some of the larger projects that foreign firms have partnered to build, namely the Casino, do contribute to FDI figures. These projects are expected to continue.

Sofronis Clerides, chair of the Department of Economics at the University of Cyprus explained to the Cyprus Mail that these results are likely due to the pandemic and its many implications for business and foreign travellers. However, he expects a continuing decline in fdi through the end of this year, and possibly beyond it. Commenting on the real estate and construction sectors, he added that ‘it seems clear there will be a decrease in investment, starting from this year.”

Crucial for a strong recovery is the revival of investment in the construction sector given the significant number of projects that are in the pipeline, along with

the shipping sector which has significant growth potential. the ministry noted.

Senators vote to proceed with Trump’s impeachment trial, but conviction may prove elusive