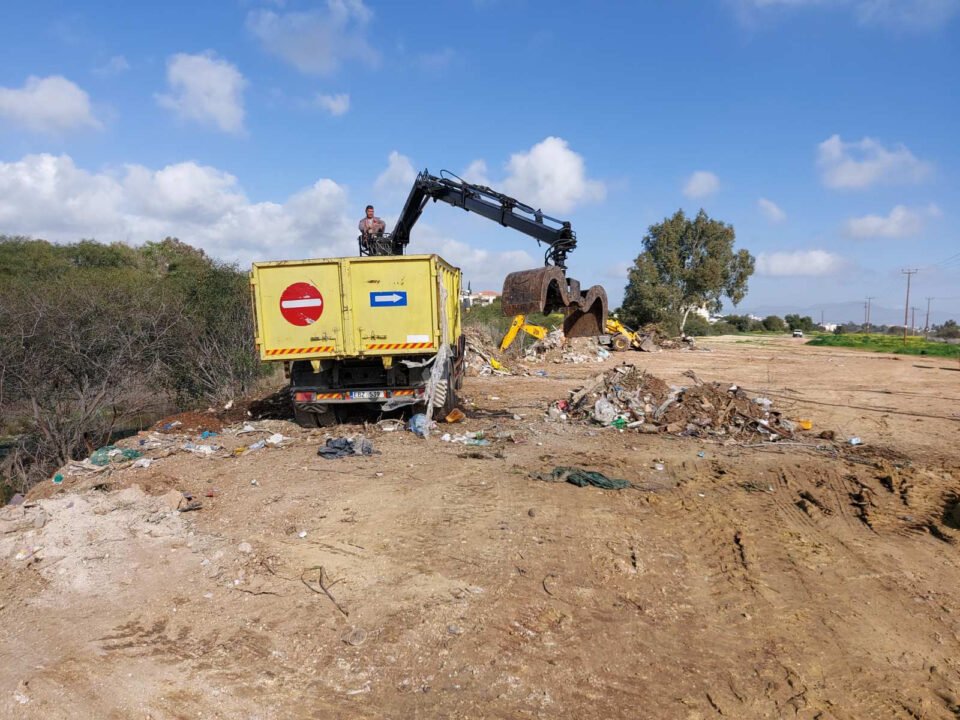 As efforts continue to clear Pedieos of rubbish, Lakatamia officials cite persistent fly-tipping and infrastructure gaps as factors leading to the buildup of rubbish in the area.

Forty more tonnes of rubbish were removed from the riverbed on Thursday, with about 250-300 tonnes expected to be cleared in total.

Even though there is a green point serving the area, people seem to disregard its existence, the municipality’s administrative officer told the Cyprus Mail.

Stelios Vasilocostas said that a big problem is the misuse of recycling and clothes donation bins, which many people treat like normal bins. As a result, rubbish tends to pile up in and around them.

“It’s not just rubbish. We recently found two mattresses dumped in the area,” he added, pointing out that not even signs threatening a fine seem to deter offenders.

Another problem is that the riverbed is a hotspot for groups of young people, many of whom vandalize and light bonfires that could easily start

In the spring of 2020, the Ministry of agriculture announced it would be authorising municipalities to issue fines in accordance with the environment department’s waste management plan.

Each municipality is patrolled by teams of inspectors whose job is to spot fly-tippers and issue them a €200 fine on the spot. The Lakatamia municipality has issued ten such fines since then, with the latest three in the past week.

In addition, the municipality has issued 60 fines since 2019 for violations relating to the law on the prevention of the pollution of public roads and spaces. These came both from inspections and from reports to the municipality from Lakatamia residents.

An issue that might explain the huge amounts of rubbish inspectors miss is that fly-tipping often happens at night, which makes it harder to spot offenders, the municipality’s health officer Argyris Argyrou said.

It should not just be up to municipalities alone to handle such issues, he continued, explaining that there is no solid infrastructure ensuring this system actually works.

“In Lakatamia our prevention team covers four different areas, but when they catch someone, I am the person who has to go to the scene and issue the fine.”

Municipalities simply cannot employ people to patrol areas for fly-tippers day and night, he said. “We are not here to replace the police”.

Both Lakatamia officials called on the public to use green spots when they need to dispose of bulky items and rubbish or risk a fine.

“We need to change our mentality,” Vasilocostas said. “It seems Cypriots only care when there’s a fine involved”.