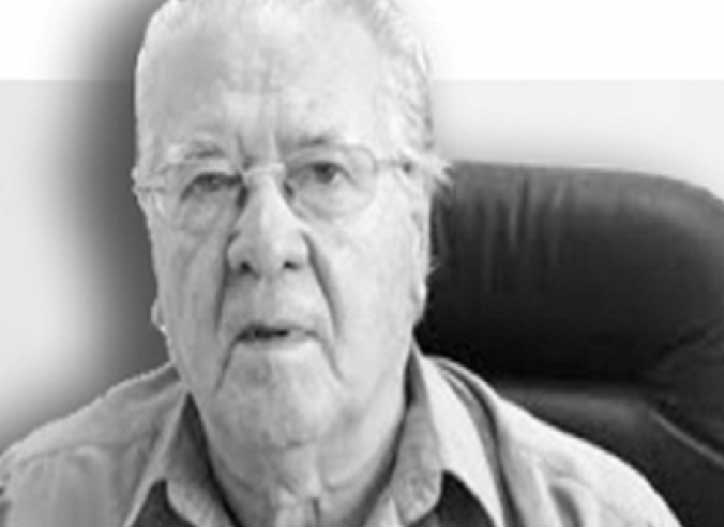 Alecos Constantinides spent decades as a columnist at Alithia newspaper

His very last column for Alithia newspaper, for which he had been writing a daily column titled ‘For and Against’ since 1983, will appear in Thursday’s edition. It was written just before he was taken ill on Monday, together with another two articles that appeared on Tuesday and Wednesday.

Born in 1930, Constantinides came from the village of Kazaphani, in the Kyrenia district and graduated from the Morphou teaching college, although he did not stay in the teaching profession for very long. He took up writing in the 1950s, as a film and art critic and was the author of the book ‘Myth and Criticism: Critique of the Intellectual Establishment,’ displaying his critical, anti-establishment attitude that he maintained until his death.

A leftist in his youth, he worked for the Akel newspaper ‘Neos Dimokratis’ before founding the newspaper Embros in 1956 with other young journalists of the Left. He turned his back on the Left over its stance on the Eoka struggle and was never to return to the fold. In subsequent years he often castigated Akel’s close links with the Soviet Union.

In the 1960s he worked for several newspapers, while in 1976 he was one of the nine journalists that set up Simerini newspaper, which offered an alternative to the pro-Makarios press of the time. He left a few years later, taking over as the editor-in-chief of Alithia newspaper in 1983. During this time, he was also the Cyprus correspondent of Agence France Presse.

He stepped down as editor-in chief in 2006, but stayed on at the paper as an editorial consultant, penning his column and writing unique daily feature about ‘word usage and meaning’ that reflected his passion for language and linguistics. He spoke several languages. Despite seven decades in print journalism, he never used a typewriter. All his pieces, throughout his career, submitted handwritten.

Never afraid to speak his mind, regardless of whom he upset, Constantinides pioneered a more irreverent type of journalism in the staid world of newspapers which always showed deference to authority. He regularly exposed the platitudes of politicians and cut through the sloganeering and mocked authority.

In the 1970s and ‘80s he was a constant thorn in the side of President Kyprianou, whom he mocked mercilessly for what Constantinides viewed as the president’s vacuous rhetoric, also publishing a book with a selection of the statements he uttered during his presidency and which nobody else dared to question publicly. It was at this time that he coined his oft-used catchphrase that in “In Cyprus you can’t take anything entirely seriously or entirely as a joke.”

A champion of a Cyprus settlement, he made a point of regularly reminding readers of what Greek Cypriots had lost by rejecting the Annan plan. Appropriately, his last column that will be published on Thursday, is about Famagusta, which would have been returned if the plan had been accepted.

He is survived by his wife Anna and three children. Christiana and Katerina from his first marriage and Alexandros from his second.

Coronavirus: We must be aware of danger of third wave expert warns