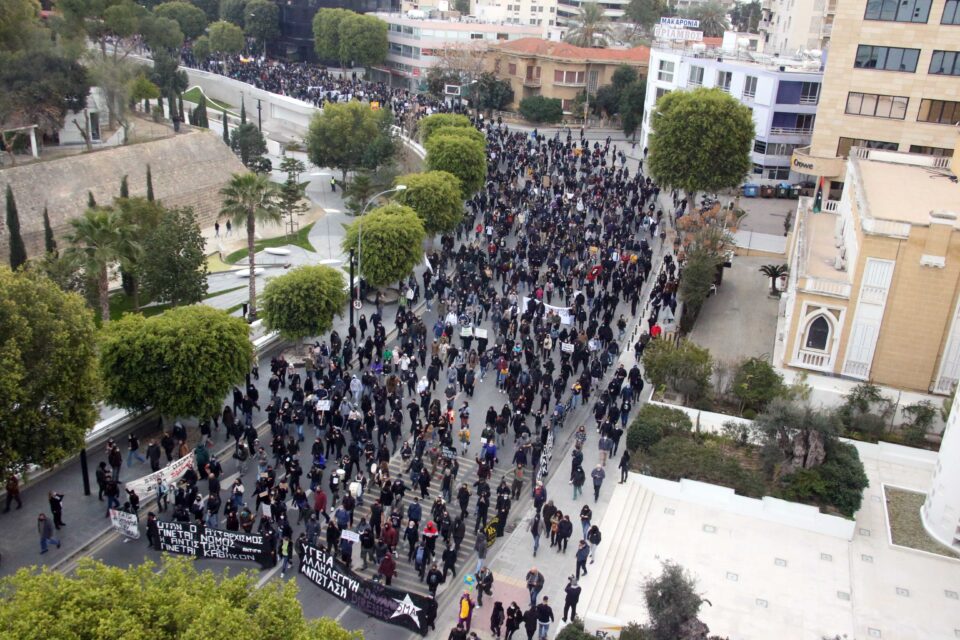 Several thousand people marched in Nicosia on Saturday in a protest against state corruption and pandemic restrictions that ended peacefully, unlike a similar event last week, which ended in violence.

Under the watchful eye of a strong police force, people of all ages gathered at Kolokasi park and marched to parliament to protest state corruption, Covid restrictions and police heavy handedness in dealing with last week’s event.

“I’m here to protest the illness of the justice system and human rights we are facing in our country; people with money, power, and authority have preferential treatment and are allowed to act unethically and commit crimes without getting punished,” a 36-year-old protester said.

The participants wore masks and tried to keep some physical distance from each other. Organisers kept reminding them all along the way to keep their distance.

Observers said there were many more people than last Saturday when the demo ended in violence as police used water cannon and teargas to disperse participants.

“It was amazing, and it was completely peaceful, and organisers made sure everything went peacefully,” woman who attended last week’s demonstration said.

Last week, protesters were met by a large police force in full riot gear and a water cannon. It did not take long for violence to erupt, as police tried to break up the event.

Several people were injured, one seriously after she was hit by the high-velocity water jet in the head. The 25-year-old had to undergo emergency surgery to her eye. Reports said she lost some of her eyesight.

The demonstrators this Saturday shouted “resign” and slogans against the police, whom they blame for last week’s trouble.

Unlike last week however, police kept a discreet presence on side roads. An ambulance was also standing by for any eventuality.

“Even introverts are fed up with your bullshit,” read one placard.

Other demonstrators were handing out flowers with a note on them to remind people of Stylianos Constantinou’s death. Stylianos was a 14-year-old boy who committed suicide in 2019 after years of abuse by his father. The state was largely blamed for not doing enough to help.

“How many Stylianos must die until we realise, they are not just thieves but also murderers?” the note said.

The march stopped outside parliament briefly and then returned towards Kolokasi park. There was an eruption of applause before the participants dispersed.

A separate protest that started a couple of hours later in Limassol, a couple of hundred people assembled outside the administration building on Anexartisias Street to protest corruption, coronavirus restrictions, and 5G.

Some were carrying a coffin, which they said contained the people’s freedom. After some speeches, the demonstrators dispersed. No trouble was reported.

A police force of over 100 officers kept watch over the event.
Cyprus Mail reporters Gina Agapiou and Lara Benjamin contributed to this report