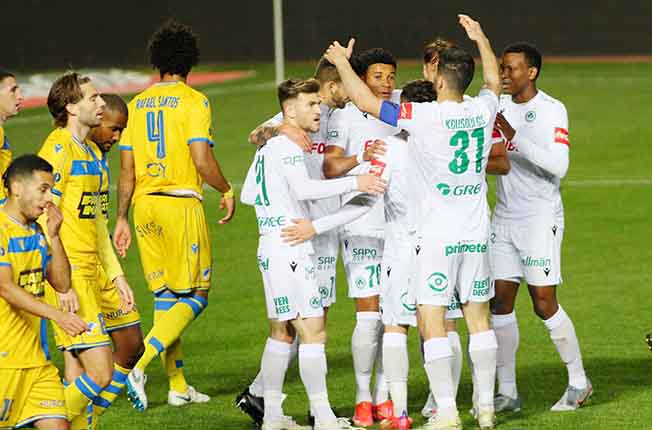 Omonia scored what could turn out to be an important away goal against bitter rivals Apoel to take a slight advantage after the first leg of their Cyprus Cup quarter final on Wednesday.

Despite a promising second-half display against the current league leaders, Apoel’s momentary lapse in concentration allowed the visitors to score, undoing a lot of good work by Savvas Poursaitidis’ side.

Omonia were the first to pose a legitimate goal threat. In the 10th minute of the first half, Loizos Loizou released Shehu Abdullahi on the right channel before the latter cut back to Jordi Gomez on the edge of the penalty area, but he couldn’t keep the resulting shot low enough.

There was much more attacking activity in the second half from both sides. First, Apoel took the lead in the 51st minute after Dieumerci Ndongala seemingly miscontrolled the ball inside the penalty area, drawing Omonia keeper Fabiano out wide before setting up Viktor Klonaridis for an easy finish with a neat cross back across the face of goal.

A minute earlier, Ndongala had the chance to put Apoel ahead but the winger scuffed his shot just inside Omonia’s penalty area.

Omonia though found an equaliser just three minutes later through Thiago. The goal was given following a lengthy VAR check confirming that Thiago was onside.

Apoel had a chance to take the lead in the 67th minute when Gayas Zahid floated a ball into the Omonia penalty area from a set-piece. The ball was flicked towards the far post where Marius Lundemo’s header was blocked by Fabiano.

In the final minute Omonia created a huge chance to take the lead against the run of play when Lecjaks, who had been released on the left by Thiago, cut the ball across the penalty area to find an unmarked Loizou who skied the resulting shot from fairly close to Ouzoho’s goal.

Speaking after the game, Apoel forward Ben Sahar said that Apoel need to show more passion in the second leg.

“I think it was a fair result. We played much better than our game on Saturday. It’s not enough. We need to be better. We have a second leg and we hope we do it,” said Sahar.

“We wanted to keep the 1-0 but we need to keep going and show much more than what we have done and play with our heart,” the Israeli added.

Meanwhile, Omonia defender Adam Lang said that the tentative nature of the first game will not be mirrored in the second leg.

“We can say the away goal is a small advantage, for sure. I think it was an even game. Both teams wanted to see what would happen as it was the first leg. I think it was a fair result,” said Lang.

“The next game will be much different. It will be a lot tougher. After we scored away they might take some risks and put us under more pressure”, Lang added.

In the first quarter-final earlier on Wednesday, Anorthosis defeated Karmiotissa 2-1 away from home to take a significant advantage into the second leg.

Trump may soon have to answer rape allegations under oath