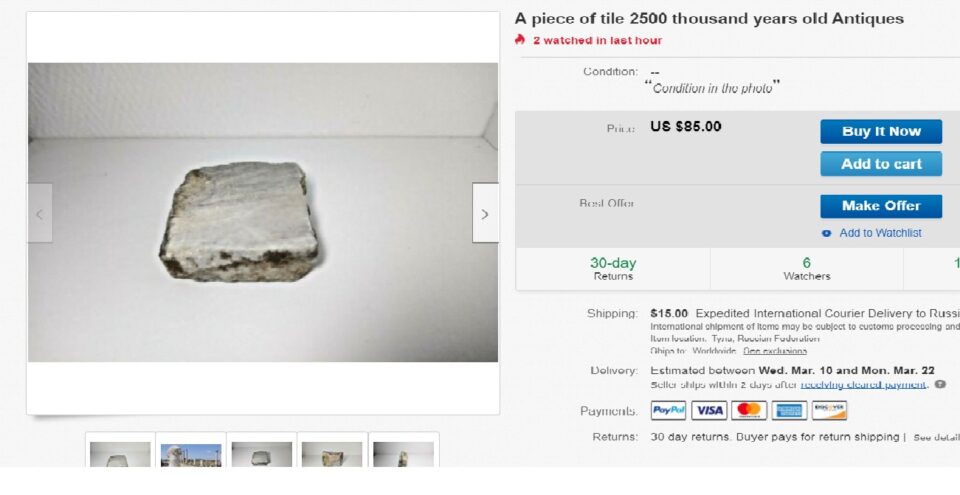 An e-bay auction of a segment of floor tile from the ancient city of Salamis has been  prevented, according to Cypriot activist Tasoula Hadjitofi.

Cypriot authorities had filed a report over the e-bay sale of a tile advertised as a piece of the floor from the ancient city of Salamis for US $85 by a Russian seller. The antiquities department said earlier on Thursday they were following up on the incident after receiving the information.

Hadjitofi, who founded the Walk of Truth foundation to protect cultural heritage said she had also contacted e-bay’s owners on Thursday night and asked to withdraw the specific item from the auction.

She was told about the sale by a volunteer of the foundation who lives in San Fransisco, the Cyprus News Agency reported.

“Our aim is to find out when and how the piece of marble was taken from Salamis and the occupied areas and who is the smuggler,” Hadjitofi said, and added that she asked to be put in contact with the Russian seller.

Cyprus is the third country in terms of antiquities sales on e-bay, said Hadjitofi who published an article on the subject with UCL professor Mark Altawee last year.

According to the Hadjitofi, e-bay technology experts in collaboration with volunteers from the foundation are working to identify any stolen antiquities from Cyprus or other countries that might be found on the site.

The archaeological site of Salamis is around six kilometres north of Famagusta, in the north. Salamis was Cyprus’ capital for around one thousand years and according to tradition, it was founded by Teucer, son of Telamon, ruler of the Greek island of Salamis, who arrived in Cyprus after the end of the Trojan War accompanied by other Greeks. The earliest archaeological finds at the site date to the eleventh century BC.