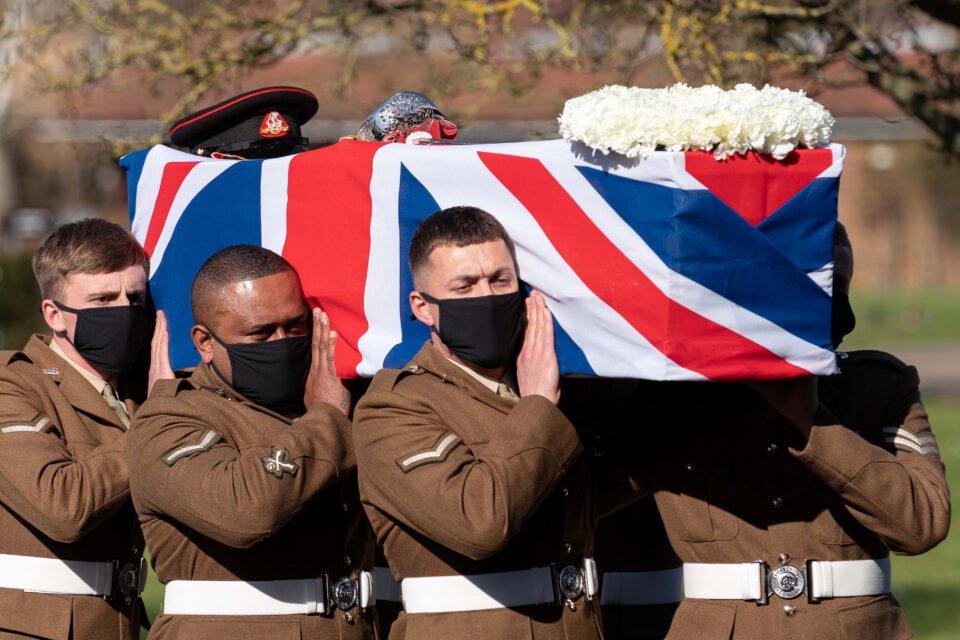 A military guard of honour and Royal Air Force fly-past marked the funeral on Saturday of Captain Sir Tom Moore, the World War Two veteran who raised millions of pounds for Britain’s health service during the coronavirus pandemic.

In the run up to his 100th birthday last year, he had been challenged to walk 100 laps of his garden to raise a modest 1,000 pounds.

By the time he finished, on April 16, he was being willed on by millions in Britain and beyond, and the total raised was heading towards 39 million pounds ($54 million).

Moore was knighted by Queen Elizabeth in recognition of his efforts, while the White House said after his death that he had “inspired millions through his life and his actions”.

In line with current pandemic restrictions, the funeral at Bedford Crematorium in central England was attended by just eight members of Moore’s immediate family. It was televised, however.

Six soldiers from the Yorkshire Regiment, the modern incarnation of Moore’s wartime regiment, carried his coffin, an honour guard of 14 fired three volleys into the air, and a World War Two-era Douglas C-47 Dakota performed a fly-past.

The service featured Moore’s own recording of “You’ll Never Walk Alone”, which topped the charts last year, Vera Lynn’s wartime anthem “The White Cliffs of Dover”, and “Smile”, recorded specially for the family by Michael Buble.

There were also readings from his daughters, grandsons and granddaughter before his coffin was committed and Frank Sinatra’s “My Way” was played.

The service ended with the regiment’s commander, Lieutenant Colonel Tim Exton, reading the Kohima Epitaph before a bugler played the Last Post.

Once COVID-19 restrictions permit, the family plan to inter Moore’s ashes in Yorkshire, northern England, where he will rest with his parents and grandparents.

Coronavirus: Limassol spike could be due to new more contagious variant, Kostrikis says