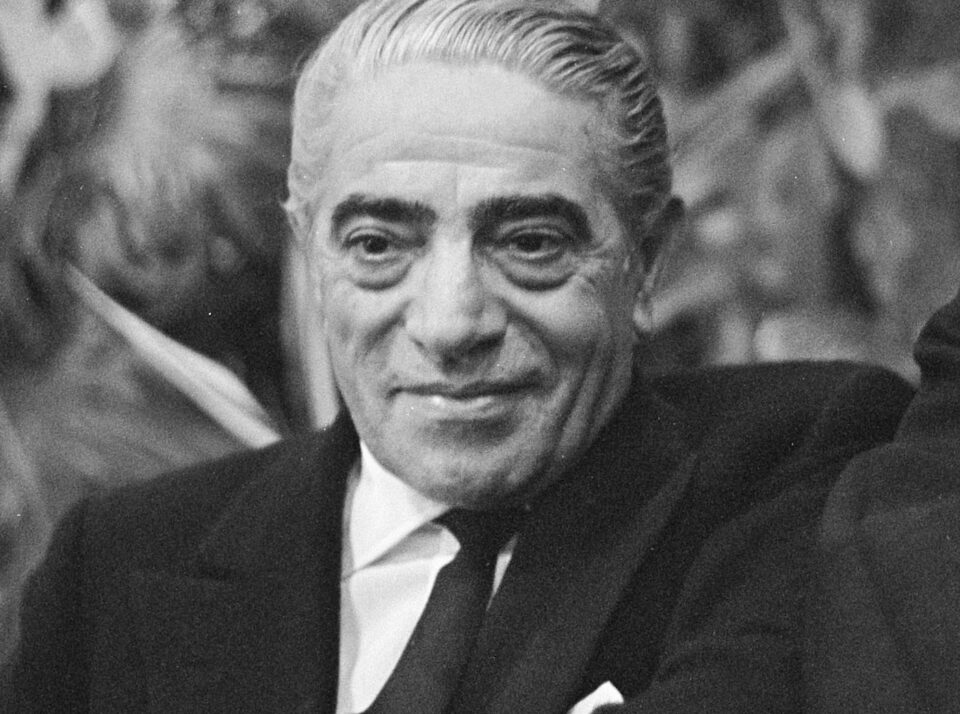 One of the great characteristics of the Greek race is that they can be defined by their legendary history. Their legacy revolves around power and of course, knowledge. Perhaps it was the Ancient Greeks who were more renowned as personifying all these characteristics, but there is one man, in fact almost a (Greek) god amongst men, who perfectly encapsulated everything that made his ancestors one of the most dynamic and impressive races ever to leave their mark on the world.

March 2021 marks the 46th anniversary since the death of Aristotle Socrates Onassis, the legend who was dubbed ‘The Golden Greek’. Onassis was born in Asia Minor, in modern day Izmir, Turkey. Known as Smyrna at the time of his birth (1906), the area was home to a rather significant Greek population, most of whom seemed to be rather well off. These affluent Greeks included Onassis’ father who made his living as a tobacco merchant and it proved to be his knowledge of the tobacco business which led to the beginning of Onassis’ immense success.

As with most Greeks in the troubled region, after the First World War and the reoccupation of Smyrna from Greece by Turkey, Onassis lost most of his family to war or political tensions. As a result of his father’s imprisonment by Turkish forces for apparent conspiracy, and to avoid any further losses and problems, he left for Greece with his father’s savings strapped to his legs.

Once his father was released and joined what was left of his family, he clashed with his son, causing the younger Onassis to decide to make his fortunes elsewhere, and so, in 1923, he left for Argentina. Onassis soon found a steady job working for the British United River Plate Telephone Company, probably because he was fluent in English and Spanish, as well as Greek and Turkish, thanks to the excellent private education he received in Smyrna as the son of a successful businessman. His talent and intuition for business started when he became a night-shift telephone operator for the company and used his time to eavesdrop on business calls made between Argentina and London and New York. Using his small savings, Onassis started investing in the deals he was listening to and soon started making money.

It was not until he made amends with his father though and started importing the softer (and cheaper) tobacco from his father that he made his first million dollars. Even though he was born in Turkey and started his business operations in Argentina, one of the things which really defined Onassis was that he was proud of his Greek heritage and traded quite significantly with Greece.

While he made a few millions with the tobacco business, it was not until he turned his attention to the shipping industry, with special focus on oil tankers that the money really started rolling in. At the time, the shipping industry was pretty much an insider’s game and it was not really that easy for anyone new to enter its waters. Sometime after the First World War, following his father’s death in Athens, Onassis visited London where a rumour fell on his ears that there were a few Canadian freight ships, owned by the Canadian National Steamship Company, up for sale. The company found itself in trouble following the massive after-effects of the Great Depression, and so Onassis simply stepped in and bought six of these massive freighters for a mere twenty thousand dollars each.

In what proved to be a stroke of business genius, he registered his ships, which were used as cargo-carriers across the Atlantic in Panama, and so flying the Panamanian flag, he saved a fortune on maritime taxes. At the same time, he conveniently embarked on an affair with a wealthy Swedish shipping heiress with the result that he was able to have a fifteen-thousand-ton tanker built, which he called the ‘Ariston’ simply meaning ‘the best’ in Greek; it was also the largest tanker ever to have been built.

One would have imagined that the globally devastating Second World War would have affected his business, but as the man with the Midas business touch, and after a few challenging experiences, Onassis found his golden way and reached an agreement with the Allied Forces, whereby he rented them what was needed of his fleet to fight the German and Japanese armies. And in a stroke of genius, he made a deal with the American government to give him their surplus war ships at the end of the war at a very favourable price.

Aristotle Onassis went on to provide tankers for oil shipping, making millions and millions using specific knowledge, like the information that Egypt would shut off the Suez Canal, so he used his super tankers to transport the liquid gold around the Cape instead.

Whatever businesses he touched – and by all accounts there were many, including majority shares in the Monte Carlo Casino which angered his old friend Prince Rainier III, ownership of Olympic Airways, and a vast array of properties and businesses around the world – Aristotle Onassis could perhaps best be described as the ultimate Midas.

More than 450 fined for traffic offences in 24 hours