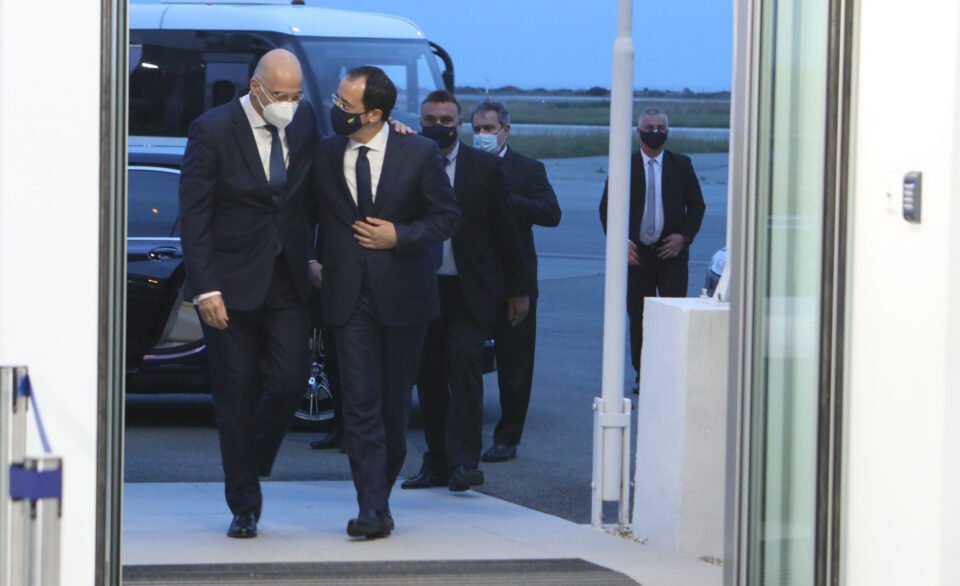 The island’s two community leaders reiterated on Monday their divergent positions on a Cyprus solution during their separate meetings with UN secretary-general’s special envoy Jane Holl Lute who is on the island for contacts and preparations ahead of April’s informal five-party summit.

According to government spokesman Kyriacos Koushos, Anastasiades reiterated his determination to work creatively beside the UN to achieve a functional and lasting solution that will ensure the Republic of Cyprus evolves into a bizonal bicommunal federation (BBF).

The president said that the presence of the EU as an observer at the meeting in Geneva was in the interest of both sides, citing the latest statements of the Turkish government on the positive agenda it seeks to have with the EU.

Turkey and the Turkish Cypriot side object to the EU’s presence at the five-party summit, arguing it will not be an impartial observer.

The Turkish side, however, said that a two-state solution would be a win-win situation for all.

Tatar said after the meeting he explained to Lute that his vision for a two-state solution, based on sovereign equality, with an equal international status, would achieve the goal of peace and stability in the region. He said this would be a win-win situation.

He added that, at the informal five-party summit everyone will express their new ideas and views and it will be seen whether there is a common ground. He reiterated that they agree with Turkey that if there is an agreement, it will now be based on sovereign equality, with two equal states working side by side.

He said Turkish Cypriots have a right to self-determination and sovereignty.

“We will support our own state, our own sovereignty. We will never allow the Greek Cypriots to control us in the north, to extend their jurisdiction to the north,” Tatar added.

Lute is set to hold contacts in Athens later this week, but also with the British Foreign Office.

The meeting in Geneva will also include representatives from guarantor powers Greece, Turkey and Britain.

There has been much speculation about the so-called “British proposal” whose provisions reportedly refer more or less to a confederate formation. But according to 10 Downing Street, Prime Minister Boris Johnson, who discussed on Monday with Turkish President Recep Tayyip Erdogan the upcoming talks, “emphasised that the UK continues to be a strong supporter of a … the internationally accepted model of a bizonal, bicommunal federation.”

Erdogan, according to a statement by his office, welcomed Britain’s recent efforts on the Cyprus issue, noting that the two-state solution would create “a win-win situation” for both sides on the island.

Meanwhile, the two countries’ foreign ministers, Nikos Christodoulides and Nikos Dendias, had a meeting in the evening, at the Larnaca airport where the Greek top diplomat made a stop on his way to Athens after a visit to Egypt.

The two ministers discussed the Cyprus problem and energy issues. Christodoulides said he briefed Dendias about Anastasiades’ meeting with Lute.

Dendias, according to the Cyprus News Agency that cites diplomatic sources, received reassurances by Cairo that there was no issue of it delimiting an exclusive economic zone (EEZ) with Turkey.

Dendias rushed to Cairo after the announcement by the Egyptian Natural Gas Company (EGAS) for the exploration of three offshore blocks adjacent to both the Greece-Egypt EEZ and the point which Turkey identifies as the outermost limit of its continental shelf and EEZ in the Eastern Mediterranean. The Greek minister said after meeting with his Egyptian counterpart that “the issue is closed.”

Athens was on alert after Turkish Foreign Minister Mevlut Cavusoglu recently invited Egypt to delimitate the EEZ between Ankara and Cairo.