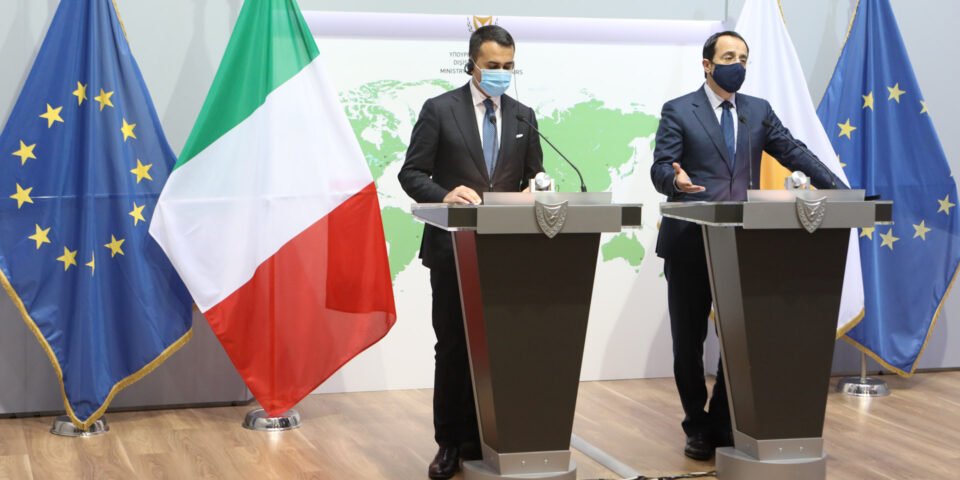 Italy strongly rejects any attempt to secure a solution to the Cyprus problem that is outside the scope of UN agreements and decisions, the country’s foreign minister Luigi Di Maio said on Tuesday.

The Italian minister was speaking after a meeting with his Cypriot counterpart Nikos Christodoulides in Nicosia.

Referring to Turkey’s illegal actions in the region related to drilling for hydrocarbons, he underlined Italy’s support for Cyprus and Greece against any violation of their rights in the region.

Speaking through an interpreter, Di Maio described bilateral relations as excellent and said that the two countries would continue to work to deepen cooperation.

“The fact that our two countries belong to a Mediterranean family is a condition on which we are building a relationship that is broader and wider and more complex,” he said.

During his discussion with Christodoulides, Di Maio said the two ministers had reiterated their intention to further strengthen economic co-operation, especially in strategic areas such as energy and infrastructure.

With regard to immigration, he said that there must be a satisfactory compromise on the EU’s Immigration and Asylum Pact and said that Italy remained convinced that the right balance between responsibilities and solidarity must be found.

Italy, he added, was also in full solidarity with Cyprus and that any unilateral initiatives that harm the sovereign rights of the island would not be tolerated. “It is clear that Italy remains on the side of Cyprus and Greece against any violation of their rights,” he said, adding that the proper exploitation of energy reserves must be grounds for cooperation and not conflict.

Christodoulides, in his comments, said bilateral relations had been further upgraded in recent years with the participation of Italian energy giant ENI in gas exploration within Cyprus’ exclusive economic zone.

“I consider it a happy coincidence that our meeting today takes place on the same day as the ministerial meeting of the Eastern Mediterranean Gas Forum (EMGF) in which both Cyprus and Italy, together with five other States, are founding members sending messages of cooperation to the wider region,” Christodoulides said.

“It is our common belief that the energy synergies created by the EMGF are of strategic importance to the wider region and beyond, and we also agree that participation in the forum is open to all states in the region that are ready to participate. Our vision for regional co-operation under international law, including the Convention on the Law of the Sea and the fundamental principle of good neighbourly relations,” he added.

Christodoulides said the two ministers had also exchanged views on practical ways to deepen ties between Cyprus and Italy within existing and in new areas of cooperation with an emphasis on trade and investment, tourism, education, research and culture, especially in matters of antiquities.

Parliament had no role in approval of citizenships, inquiry hears