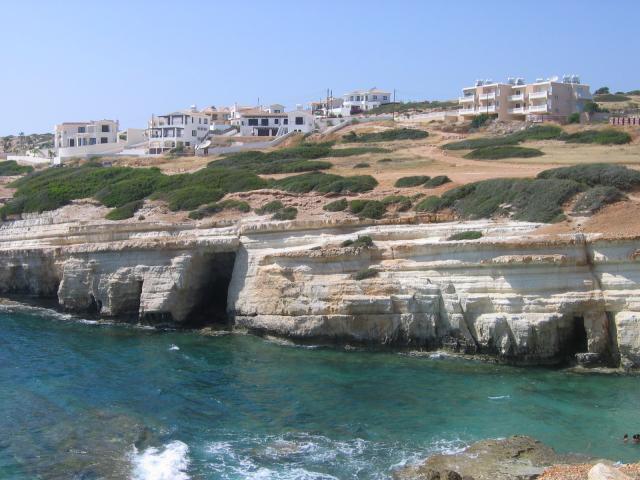 Villas built above the sea caves in Peyia (Akti)

Supposedly protected coastal areas are being nibbled away by development

Uncontrolled development is destroying natural habitats and all that is unique about the island, environmentalists say. Nowhere more so than Cyprus’ beaches.

“Unfortunately, we are going through an unprecedented attack from this government on all the issues of environmental protection,” Charalampos Theopemptou, MP and head of the Cyprus Greens, told the Cyprus Mail.

Taking its place, sustainable tourism would nurture both progress and the environment hand-in-hand, preserving and expanding what is special about Cyprus.

Numerous areas which are designated as protected in Cyprus are being eaten away, destroying flora and fauna in the process.

Such an area is the sea caves in Peyia, Paphos, where villas by large developers such as Leptos and Aristo have been built over the last 25 years, according to Xenia Loizidou, a civil and coastal engineer and member of the board of directors of Akti.

Akti, is a project and research centre, a non-governmental, non-profit organisation based in Nicosia, established to raise environmental awareness and promote sustainable development.

Rezoning of areas has spelt disaster for the future as is the case in this instance, Loizidou told the Cyprus Mail.

“Twenty years ago, Akti objected to the zoning in the area and a legal process to legitimise actions, it was a ministerial decision to change the zones. Previously it was an agricultural zone and protected. The issue here is, it is the first step to what will inevitably follow. This was in the late 1990s and since then, development has got underway.”

Look no further than the new five-star hotel being constructed 2km away from the sea caves towards the Akamas by Korantina developers.

The government supports making beaches private in Cyprus, using different means, according to Theopemptou. This, he says, spells disaster.

“At first they tried to give beach areas that are part of government forest land to private developers and communities to be converted to restaurants and public beaches. Such areas are the beaches of Akamas, Petra tou Romiou site, Dasoudi area in Limassol, Konnos beach in Ayia Napa and others,” he said.

“Then they tried to include these in the draft law that is now being discussed in parliament for the new municipalities. This includes things like the ability of a local authority to dig up a beach, different prices for each beach so that we could have ‘luxury beaches’, made all illegal buildings on a beach legal and the ability to have tables and chairs on the beach and many other. All the clauses are now removed,” he said.

However, parliament passed a law in 2017 that will allow anyone that built a groyne (a low barrier built out into the sea from a beach to check erosion and drifting), or an embankment to ask for the beach to be declared as a small port, he noted. After this the next step will be to declare the beach private. This can be done no matter whether the groyne or the embankment were built legally or illegally, he said.

“In the case of the sea caves in Paphos, they relaxed the planning permits and purposely ignored the seal protection plan. In addition, the illegal removal of rocks from the beach in the sea caves area was ignored and is now considered an official beach.”

This sort of damage to the environment is irreversible, and most of the time the irony is that developers ‘use’ the beauty of an unspoiled area to advertise planned properties to would-be customers. They are destroying the advantages that Cyprus has in tourism which are the natural advantages of the environment here, said Loizidou

“The north coast of Paphos, that of Larnaca, Ayia Napa, Protaras can be protected. I don’t mean don’t allow development, it can be of added value to the environment when it is controlled,” said Loizidou.

Since the 1980s, the Akamas has been under absolute restrictions but eventually there will be uncontrolled elopement, she said.

The Akamas peninsula is an area of outstanding natural beauty and home to an abundance of flora, fauna and wildlife including numerous birds and is also a breeding ground for the protected loggerhead turtle.

Sustainable development and tourism is a matter that Loizidou is highlighting for this area.

What she describes as environmental justice is the issue here.

“You can’t tell landowners in the Akamas that they are doomed to be poor, the value of the area must be considered and the state shouldn’t buy it, but build infrastructure to improve the well-being of the people of the area,” she said.

She cites Germany as an example. There, landowners are fighting to get their land included as EU-protected Natura 2000 areas, as it comes with so many fixed privileges and benefits. It is the same in coastal areas of Spain, she said.

This can be achieved by creating bushiness, such as funding local produce, gastronomy for example, setting up a network, support schools in the area, offer other sorts of tourism, such as hiking and religious tourism. None of these need a five storey hotel built by the sea.

Cyprus systems in place for ‘development’ are often called out as flawed, as in many cases the government gives approval for projects before an environmental study is completed.

Theopemptou pointed out that the previous version of the law was set up so that ‘everything would be possible’, as for instance it had no penalty if the study contained components that were not true, and worst of all, anyone could do a study as it was not obligatory for the consultant to have any knowledge on the topic, he said.

“In 2018 the law changed but we still have problems on how government interprets the law,” he said.

The major issue is the fact that the developer chooses and pays the company that will make the Environmental Impact Assessment Study, said Theopemptou, so there is no chance that the study will come to a recommendation that will prevent the developer to build.

Some ‘rogue’ businesses go further. “It is easier to say sorry than to ask permission first” is used quite a lot here, Theopemptou said.

“For instance the multi-storey building that was built without a permit in Latchi or the extra floors of the hotel in Ayia Napa are some examples of this. Sadly, government intends to examine their application and make everything legal.”

Most of the cases that come to the public attention are made public by the Green Party, he said.

In addition, there is no political will to make a strategic study of entire areas, Loizidou said, there is never a capacity study, for example, to see how many villas or tourists etc an area could accommodate before it collapses.

According to Loizidou, authorities in Paralimni carried out illegal work at Fig Tree Bay, and built a structure in the name of ‘cliff protection’, but it was nothing to do with revetment of the cliff.

“It created an area to put sand on rocks to place beds and umbrellas to have more income.”

Although Akti complained to the authorities, they are yet to hear anything back.

On the issue of artificial reefs, neither environmentalist has an issue per se but Theopemptou objects to allowing developers to build them with no limits or controls.

“The last time this was in parliament, it refused to accept any environmental restrictions on whether the reef could extend above water and have a restaurant built there as well, or whether a footpath could be built from the shore to the reef. I was relieved when this was never brought back to the committee,” he said.

“Our coast is an endangered species and should be protected. It is our ‘immune’ system. We will feel it in the future if we don’t act.”

Our View: Although options limited, barbed wire unlikely to stop flow of migrants