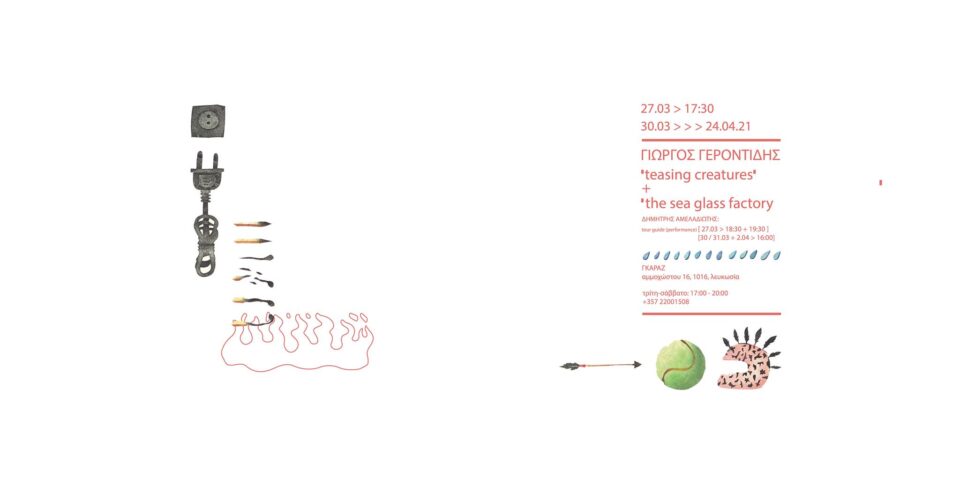 A new art exhibition is coming to Nicosia at the Lefteris Economou Cultural Foundation at Garage multi-space. Artist Giorgos Gerontides will showcase his work in an exhibition titled Teasing Creatures and his project in collaboration with the Post-Spectacular architecture office The Sea Glass Factory.

The exhibition, opening on March 27, consists of complex installations that incorporate sculptures, found objects, drawings and videos. During the first day of the exhibition and for a few more dates, Greek artist Dimitris Ameladiotis will present an interactive performance/tour of the project The Sea Glass Factory. These will take place on March 27 at 6.30pm and 7.30pm as well as on March 30, 31 and April 2 at 4pm, for which reservation is needed.

Gerontides’ deals with the idea of cabinet de curiosités and a collector’s obsession, as well as one’s romantic characteristic elements. The act of collecting objects, preserving and archiving them, defines a specific aesthetic, as well as a narration.

“In my work,” said the artist, “I draw references to the way museums, and the sixteenth-century Wunderkabinetts shape our understanding of history, the ways in which we accumulate knowledge, and even how we perceive the natural world. The appropriation of archaeological and other scientific methods of collecting, archiving and exhibiting objects, which I employ in my practice, create works that challenge the distinctions between an ‘objective’ (rational) view of the world and a ‘subjective’ (more irrational) version of it, based on an imaginary narrative, thus asking questions about the role and weight of scientific knowledge in modern society. So, I start by working with a system of preserving and archiving objects that gradually lead to the formation of a character with the ultimate goal of creating a story.”