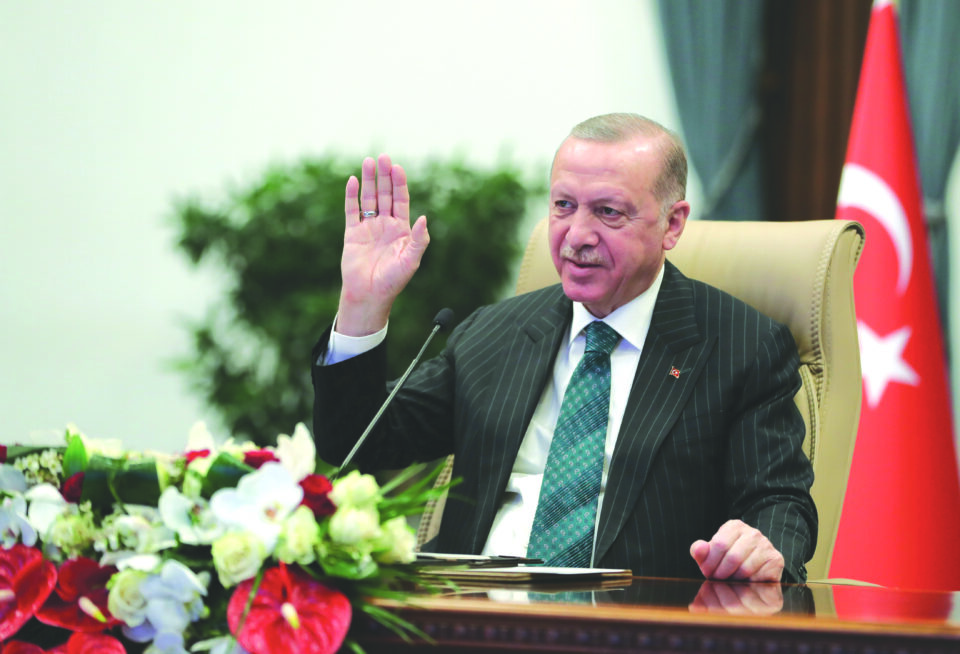 In the early days of peace talks with Kurdish militants in 2013, Turkey’s then-Prime Minister Tayyip Erdogan spoke out against ethnic divisions and declared, “we are a government that has trampled on every kind of nationalism”.

Eight years on, long after the talks collapsed in a surge of violence, analysts say Erdogan, now president, is dependent on his nationalist allies in parliament led by Devlet Bahceli.

This has limited his political options, fuelled autocratic moves and alienated Kurds across the country, they say.

Erdogan’s long pivot from boosting Kurdish rights to a hard pact with nationalist Turks was reinforced this week when a top prosecutor moved to ban the pro-Kurdish Peoples’ Democratic Party (HDP) over militant ties, after months of calls to do so from Bahceli’s Nationalist Movement Party (MHP).

Cengiz Candar, who wrote a report examining how to end the decades-old insurgency before the peace process, said the timing of the HDP charges, just before an MHP congress, showed Bahceli’s heavier hand in decision-making.

“It illustrates that Turkish autocracy is getting much more repressive against the Kurds and… even more nationalistic,” the veteran political commentator told Reuters. “Either Erdogan is their (MHP’s) hostage, or acts in unison with them.”

“The tunnel into which the government has pushed Turkey is getting even darker. We don’t see light at the end.”

Echoing that view, HDP co-leaders Pervin Buldan and Mithat Sancar said in a statement the AKP had “presented a gift to the MHP congress through the judiciary, and the prosecutors have acted upon political instructions”.

Erdogan’s Islamist-rooted AK Party (AKP), in power since 2002, itself narrowly survived a closure case in 2008. He has spoken out in past years against shutting parties, including the ban on another pro-Kurdish party in 2009.

But since the ceasefire with Kurdistan Workers Party (PKK) militants ended in 2015, Erdogan has taken a harder line. Thousands of HDP members have been arrested in a crackdown and many of its lawmakers and mayors unseated and jailed.

More than 40,000 people have been killed in the conflict the PKK launched in 1984. It is designated a terrorist group by Turkey, the United States and the European Union.

In Erdogan’s early years as leader, inspired by hopes of taking Turkey into the EU, he expanded political and cultural rights for Kurds, who make up some 20% of the country’s 84 million population.

Erdogan has defended his alliance with the MHP, saying it showed personal and political differences could be overcome in the national interest.

But polls show support has slipped for the AKP and MHP as the government battles the economic fallout from the coronavirus pandemic. Elections are not scheduled until 2023.

Gonul Tol, director of the Middle East Institute’s Turkey programme, said Erdogan had sought to divide the opposition by pursuing a policy of criminalising the HDP since 2015.

The move to shut it down “upped the ante”, she said, after the government was criticised for a failed mission to rescue 13 Turkish captives, soldiers and police in Iraq last month. Ankara says they were executed by PKK militants there.

“Erdogan and his nationalist ally will continue to use the Kurdish card to keep their base together,” Tol said.

“They are hoping to keep the Kurdish voter at home in the next elections by shutting down the HDP, but it might very well backfire (and) mobilize Kurdish voters to support the opposition.”

Galip Dalay, a fellow at the Bosch Academy, said the timing of the closure case will not play well politically for the AKP.

“(It) will make the prospect of Erdogan finding new partners more difficult amongst opposition political actors,” he said.

Dalay said the president’s options appeared limited to his nationalist alliance, which is shedding support, or returning to a parliamentary system that was replaced by a presidential one in 2018, when the AKP and MHP agreed their alliance.

“This move burns further bridges between the governing AK Party and the Kurds, and contributes to the Kurds’ sense of political alienation,” he said.