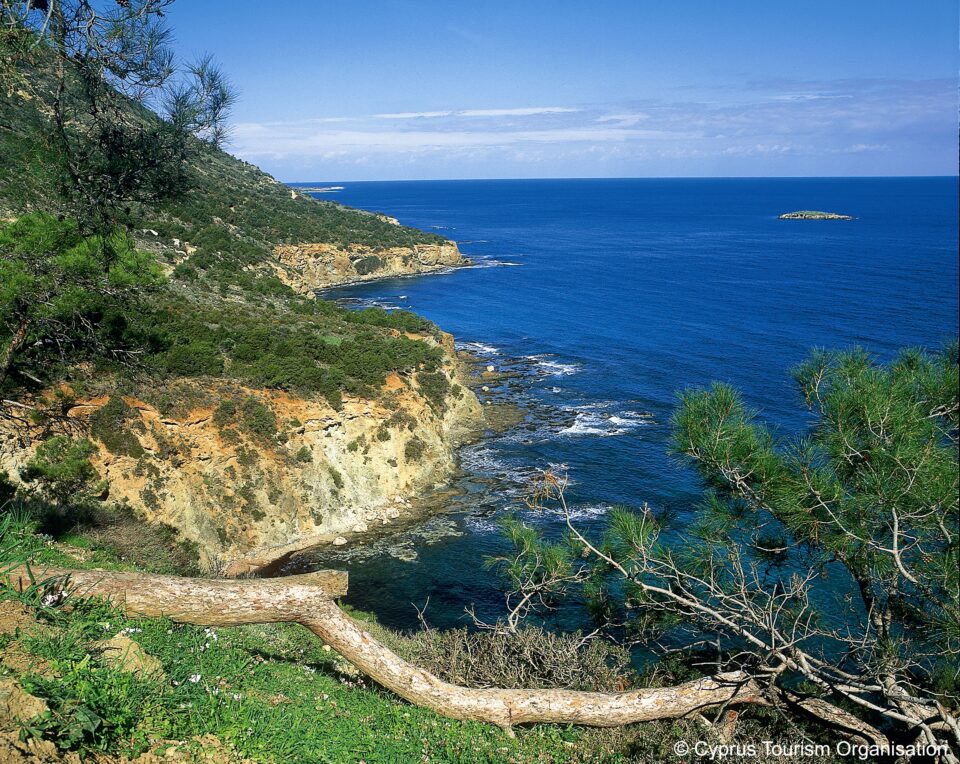 The government's plan allows some development in the area

Less than two years before the government’s proposed Akamas national park sustainable plan is due to be implemented, environmentalists and landowners in the area remain as deeply divided as ever.

The two sides have been clashing for over 30 years over the future of this most special area of Cyprus, but – for very different reasons – they do agree on one thing. Neither of them likes the government’s solution.

Agriculture Minister Costas Kadis recently briefed the House environment committee on the progress of the project, which is expected to cost €12 million plus €1m per year in operating costs and be finished by the end of next year. The plan includes eight Akamas communities: Kathikas, Pano Arodes, Kato Arodes, Inia, Drousia, Fasli, Androlikou and Neo Chorio.

Environmentalists fear that the intended provision of roads and services are all that is required for the ‘wider development’ of the area. The Green Party tried to block the money for the development of the forest area during a vote for the state budget, but garnered no support from other parties. They are now considering other ways to stop the government’s “planned destruction”, Charalampos Theopemptou, MP and head of the Greens told the Cyprus Mail.

And, conversely, landowners in Inia, the village most affected by the plan will also object, as they continue to push for ‘mild’ development of three specific areas.

“We are currently studying the plan, it’s long at 412 pages. We have 35 days from March 5 to object and we will,” Yiangos Tsivikos, the community leader of Inia village told the Cyprus Mail. “And we will keep objecting to any amendments until the government grants us the minimum of what we are asking for.”

The Akamas has four areas that are usually discussed: The government-owned forest land, where they plan to build asphalt roads, control entry points and create refreshment areas and services inland and two on beaches. One of these will be on the southern Lara bay, the protected turtle nesting site, according to Theopemptou.

The second area concerns private properties that are enclosed within state forest land. Over the years reports of exchanging these with government land elsewhere have arisen, but never materialised.

The third is the remainder of the area where there is private land that needs to be protected as they fall within Natura 2000 areas, the EU network of nature protection areas. Environmentalists are concerned that the government will give permits for ‘farms that will accept visitors’ in these areas, which could be transformed into small hotels.

The Akamas sustainable plan includes the expansion of residential and tourist zones in Neo Chorio, Drousia, Kato and Pano Arodes and Kathikas, an extension of the craft zone in Drousia, (where visitors will be able to visit small shops and watch traditional crafts such as basket weaving), and the livestock zone (animal farming) in Neo Chorio and Inia.

A new quarry area is defined in Androlikou, where there is already an extensive quarry, and an upgrading of building density in all the centres of the communities. There is a definition of three areas of specialised development in Drousia, Inia and between Kathikas-Pano Arodes.

Separate roads are planned, around one from each community, which will lead to a corresponding number of entrances to the Akamas Park.

The Akamas area including the state forest, which was declared a national park, and adjacent private plots of land will continue to come under a strict protection zone, where development would be restricted to mainly public and infrastructure projects.

Private plots of land adjacent to the state forest (most of it belongs to the Natura 2000 network) is within a protection zone, and building conditions will apply with an additional building factor. The plan says strict conditions will apply to any development to ensure the protection of nature and the environment, and will promote uses and activities that will highlight the landscape, nature and rural character of the area.

The remaining area will also be subject to strict provisions but opportunities for development will be greater.

Since 1989, large areas of the Akamas were declared a zero-building zone, so all development was banned.

Discussions have been underway ever since with landowners and residents arguing that it is unfair they are not permitted to develop what has become prime real estate, while conservationists countered that the Akamas is one of the last truly beautiful nature spots in Cyprus and that it is already under threat by impinging development.

“This is not a good plan and our suggestions have not even been considered,” he said of the restrictions laid out in the government plan.

But the government says the plan will allow the sustainable development of the area by 2030 and argues that currently 800,000 people visit the area each year without any checks or controls.

However, the green-lighted ‘upgrades’ in the plan will spell disaster for the Akamas and are “extremely worrying”, Theopemptou said.

“Nothing else is needed to start building if utilities are placed here, that it is my greatest concern,” he said. “There are plans for the forest areas, and areas for property development; this is the first time that the government will make it easy for developers to build there.”

But if the plan allows for some development, why is Inia unhappy?

Inia village had requested three specific areas where development could be permitted and not just an extension of the building area close to the village as suggested in the plan. Inia believes its requests are ‘measured’ compared with demands of other villages.

Tsivikos says that prior to the 1989 development ban, an area close to the protected Lara bay, was designated a tourist zone with a building ratio of 57.5 per cent permitted.

“We would like at least 15-20 per cent. The zone is not on the beach and we don’t want to build hotels, but restaurants, cafes or bars so that all of the visitors that the government expects will have somewhere to sit. Now there are not even toilets and people use our fields and the forest,” he said.

The second area is close to the village and a third is close to a church. Prior to 1989, one was a ‘tourist’ area and another already had a 15 per cent building factor.

Tsivokos’ family, like many others, own land all over Inia.

“People should be able to develop their land away from the beach, build villas and sell them and have cash in their pockets just like everyone else. We just want the same rights,” he said.

But for Theopemptou even the planned refreshment areas to service the public are already a step too far as he fears that the utilities constitute a first step to further development.

“When I raised the issue of electricity supply with the minister (Costas Kadis), he said it would be provided from photovoltaic sources, but this is not the correct answer. The point is that there is electricity there at all.”

The plan will place “excessive pressures and significant threats to the protected areas of the Natura 2000 Akamas peninsula network”, Klitos Papastylianou, a scientific and administrative officer at the Federation of Environmental Organisations in Cyprus (Opok), informed the Sunday Mail.

He questioned why the forestry department had already submitted a request to the interior minister, by way of derogation, to construct a refreshment centre at the protected Fontana Amorosa site, even before the submission of the government’s plan and an appropriate impact assessment.

And, prior to the plan’s submission, the main forest road Agios Minas-Neo Chorio is already in the process of being registered on the public road network he said.

“This is contrary to the planned arrangements and management measures contained in the management plans of the Natura 2000 and Akamas Peninsula areas,” he said.

Lack of detailed information despite the plan’s 412 pages is another cause for concern. Charalampos stressed that although the plan is ‘huge’ as yet no real information relating to state land is available. The only official line is that on private land there will be farms, both animal and arable, that will accept visitors, he said.

The government insists the plan will protect the area and upgrade visitors’ experience, as well as boost ecotourism and rejuvenate local communities. Environmental impact studies are ready, as is a preliminary list with the operating rules. The final architectural study has also been delivered, along with a preliminary study on road improvement.

But prior to the adoption of the plan, Opok is suggesting that some provisions need to be revised, amended and added. These include the removal of illegal structures, harmful activities ceased and environmental damage restored.

Private properties inside the park should be appropriated by the state, natural sources, such as forests and water, maintained and protected areas should be extended to include species of flora and fauna.

The construction of kiosks and other infrastructure in certain locations like Fontana Amoroza must be prevented, it said.

For Tsivokos, the objections by environmentalists merely proves that they don’t understand Akamas residents, their needs or intentions.

“There is always conflict with environmentalists. They don’t understand that we don’t want to put concrete and hotels in the Akamas. We want specific areas designated to serve business and tourism. In other EU countries, careful development with government direction, is permitted, but in Cyprus it’s just a big ‘No’.”

Residents should be allowed to live and thrive in the environment that they have ‘kept going’, for so many years.

“The turtles and the environment wouldn’t be there if it were not for us residents. It’s not because of the environmentalists. No one can protect the Akamas better than us.”

This area corresponds to 75 per cent of the Natura 2000 protected areas, Site of Community Interest (SCI) and Special Protection Area (SPA) Akamas Peninsula. The Akamas NFP Sustainable Development Plan is expected to impact primarily on state forest land, but it could also have indirect impacts on private land and particularly “enclaved land” within the Akamas NFP (e.g. land development claims/rights due to the improvement of forest road network and the provision of access to public road network).

This includes the study areas of the communities of Neo Chorio, Androlikou, Fasli, Drousia, Inia, Pano and Kato Arodes and Kathikas. This corresponds approximately to 60 per cent of the terrestrial territory of the Natura 2000 protected areas, SCI and SPA Akamas Peninsula.

This includes the municipality of Peyia and corresponds approximately to 40 per cent of the terrestrial territory of the Natura 2000 protected areas, SCI and SPA Akamas Peninsula.

The Akamas Communities and Peyia Municipality Development Plans are expected to have more impact on private land within and/or adjacent to the Natura 2000 protected areas, SCI and SPA Akamas Peninsula, through the amendment of the current town planning regime.

The Strategic Environmental Assessments (SEA) and the Appropriate Assessments (AA) for the Akamas NFP Sustainable Development Plan have already been submitted and they are expected to be presented and examined by the competent committees.

The SEA and the AA for Peyia Municipality Development Plan is still expected to be submitted.

Our View: Rational thought has been another casualty of the pandemic