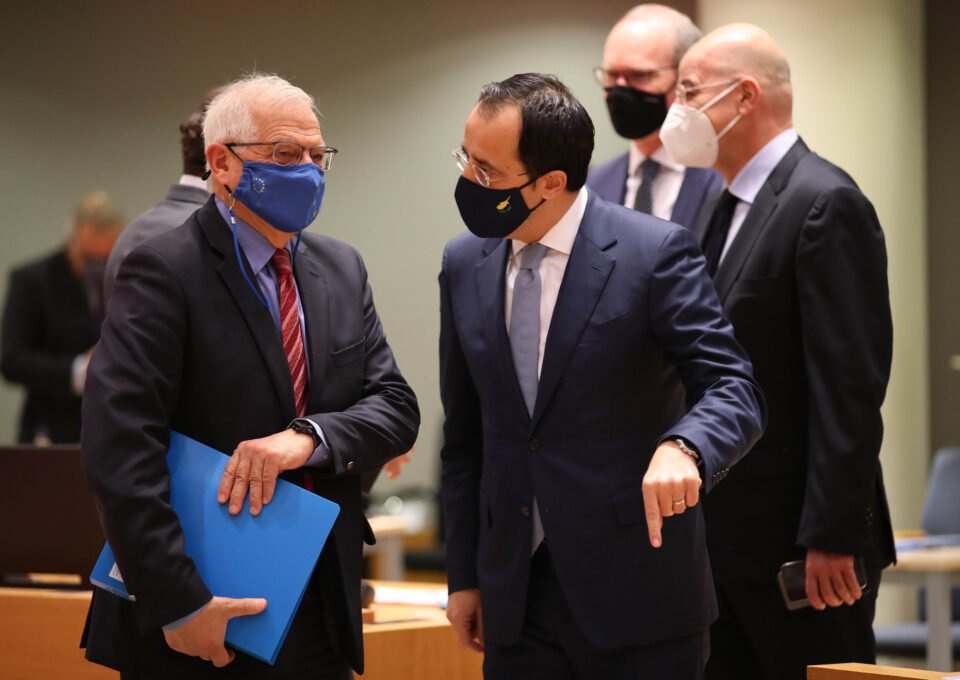 Speaking after the council’s meeting, which discussed the EU report on its relations with Turkey, Borrell said the EU would be monitoring Ankara’s behaviour until the summer.

“The report recognises that since last December, we have seen some signs and steps towards the de-escalation in the eastern Mediterranean from the Turkish leadership,” Borrell said.

“At the same time, the domestic situation in Turkey remains a serious concern, including the threats to the HDP [the Kurdish People’s Democracy Party] and the withdrawal of Turkey from the Council of Europe Convention on Preventing and Combating Violence Against Women and Domestic Violence, better known as the Istanbul Convention,” he added, referring to Ankara’s announcements last week.

“These kinds of actions take Turkey out of the European path,” Borrell noted.

He said he was meeting Turkish Foreign Minister Mevlut Cavusoglu later Monday to discuss its intentions.

Borrell said they have placed milestones, which Turkey had to meet.

One of them, “would be developments in the Cyprus problem and exploratory talks with Greece a second one; Libya is another one and the domestic situation one more”.

Greek Foreign Minister Nikos Dendias said the EU report was positive because it correctly identified Turkey as a problem for the whole of Europe and highlighted the problems that the Turkish behaviour posed to the EU.

“Of course, there are also shortcomings, such as the casus belli, or references to Turkish offences such as Varosha, or the direct violations of international law on the sea, the Unclos (Treaty),” Dendias said on his way to the summit.

He added he would stress these shortcomings but was keeping the positive element that “Europe is considering Turkey as a problem and is proposing a double agenda. But on the other hand, there is clearly the possibility of taking measures, sanctions, against Turkey if it drifts again into an unacceptable transgressive behaviour.”

In the report, Borrell said normalisation of EU-Turkey relations will remain extremely challenging in the absence of a solution to the Cyprus issue.

The report notes that Turkey’s non-recognition of the Republic of Cyprus continues to lead to the blockage of different paths of cooperation while normalisation of EU-Turkey relations will remain extremely challenging in the absence of a solution to the Cyprus issue.

“The Cyprus settlement issue is a core element of Turkey’s strong disagreements with the EU in the Eastern Mediterranean.”

The report also said that Borrell expresses full support for the UN secretary-general’s (UNSG) efforts for the speedy resumption of the Cyprus settlement talks despite the unilateral actions in the fenced area of Varosha as well as repetitive statements directly questioning the agreed basis for the solution to the Cyprus problem as provided by the relevant UN Security Council resolutions.

“Talks between the two communities, eventually leading to an agreement, are essential for decreasing tensions in the Eastern Mediterranean,” Borrell said, adding that positive outcomes related to practical and vital issues for the Turkish Cypriot community – such as facilitation of export of haloumi/hellim and distribution of Covid-19 vaccines – could lead to an environment conducive to more trust.

Overall, Borrell said, the political context in EU-Turkey relations has progressively deteriorated over the past years, bringing to a virtual halt the various instruments and processes for bilateral engagement and cooperation.

“This has been mostly due to Turkish actions in the Eastern Mediterranean, directly challenging the rights of the Republic of Cyprus in its maritime zones, and a sharp increase in Turkey’s provocative actions against Greece; the failure to advance in the Cyprus settlement process, coupled with Turkey’s related threatening actions and disparaging rhetoric; and assertive Turkish interventions in most of the surrounding regional conflicts, in ways that often were at odds with broader EU interests.”

To deepen the present momentum and incentivise closer EU-Turkey ties across the board, he added, “we believe that the Union should put a number of possible areas of cooperation on the table to allow for a progressive, proportionate and reversible approach.”

The so-called ‘positive agenda’ suggested by Borrell includes strengthening economic ties which he said, was “another win-win situation for both sides”, modernisation and expansion of the scope of the current EU-Turkey Customs Union including a guiding framework for economic reforms in Turkey.