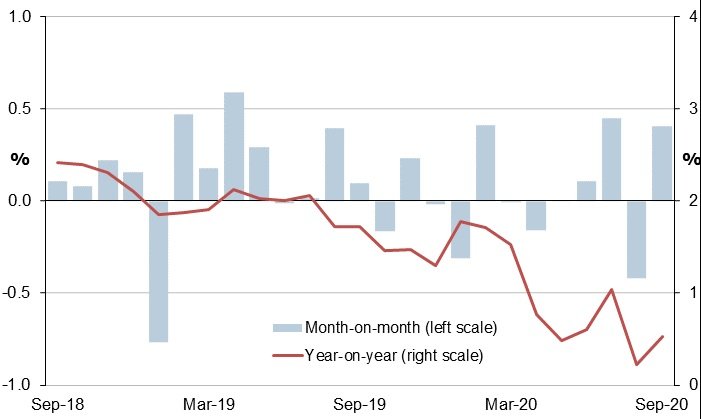 UK inflation is forecast to jump to 2.5 per cent this year, as energy prices and consumer spending surge.

Consumer price inflation, the measure targeted by the BoE, was just 0.7 per cent in January but economists at Bank of America and Pantheon Macroeconomics see it reaching 2.5 per cent by late this year. The BoE’s forecast last month was just below 2 per cent.

Most of the increase is likely to come in the next few months, due to the raising of a price cap for many domestic energy bills from April and a 50 per cent surge in oil prices since effective Covid-19 vaccines were announced last year.

The impact of higher prices will be magnified as they are compared to levels a year ago, when demand slumped at the start of the pandemic, briefly pushing oil prices below zero and sending British inflation to its lowest since 2015.

The same pattern is visible in the United States and the euro zone.

“All central banks are in a similar position that their headline inflation rates are going to be above their targets by the end of the year because of the rebound in oil prices,” said Samuel Tombs, chief UK economist at Pantheon Macroeconomics.

British inflation is likely to get an extra push in August, when restaurant prices will be compared against discounts a year before under a government scheme to attract diners during a lull in the pandemic, and again in October, when a temporary sales tax cut for hospitality begins to be phased out.

Brexit and Covid-19-related disruption is also pushing up the cost of some imports from the European Union and elsewhere, though it is too early to see a clear impact on overall prices.

BoE Governor Andrew Bailey has stated that Britain’s central bank — which is in the middle of rolling out £150 billion ($207 billion) of quantitative easing bond purchases agreed last year — will not tighten policy at the first sign of inflation.

The BoE last week affirmed it would wait for “clear evidence” that inflation would stick at 2 per cent and that spare capacity in the economy such as joblessness was reducing before considering tighter policy.

But last week’s meeting set the stage for a dispute later in the year — when inflation is likely to be above target and headline growth rebounding sharply — about whether the economy is at risk of overheating.

The minutes noted “a range of views” on how much spare capacity exists now, how fast it is likely to be used up, and how the post-pandemic recovery will differ from others.

BoE Chief Economist Andy Haldane has likened the economy to a “coiled spring” and described inflation as a “tiger” that is beginning to stir.

Inflation is more likely to overshoot than undershoot BoE forecasts, he said, as richer households spend savings built up during lockdown and due to mismatches between supply and demand. He also sees a risk of a long-term reversal of past globalising trends that brought cheap goods and migrant workers to Britain.

But to many economists, the inflation pressures Britain is facing look more like the temporary factors the BoE has looked through in the past than the start of a longer-term change.

Few see rates rising before the tail-end of 2022 at the earliest.

How Britain’s job market responds after the government furlough programme ends in September will be key for the BoE’s Monetary Policy Committee, said Philip Shaw, chief UK economist at Investec.

“It would be surprising if the MPC as a whole began to make some very hawkish noises on monetary policy before anyone gets clarity on the labour market,” he said.

If British wages do rise significantly after the pandemic, putting upward pressure on inflation, it will mark a sea-change from the previous decade, when wage pressures were very muted despite unemployment falling to its lowest since 1975.

The fact that British inflation averaged close to its 2 per cent target between 2008 and 2019 largely reflected the inflationary impact of two big falls in sterling in 2008 and 2016.

Pantheon’s Tombs also saw little sign of wage pressures over the next two to three years — the time horizon the BoE normally focuses on — and added that a rise in sterling since late last year was likely to reduce inflation in 2021.

But he said Haldane was right to point out longer-term dangers of greater inflation now that Brexit had made it harder to import workers from the European Union.

“In time I think wages could be a problem for businesses,” Tombs said. “But I see that as three to four years down the line, once the recovery is much more mature.”